Nyah is only 29 km away from Swan Hill so we didn’t have far to travel for our next stop. Nyah is a girls name meaning Goal and purpose.

We pulled into the Lions Park which sits on the Victoria side of the Murray River. We were impressed with how large the area was. We were going to use the bush camp as a base while we traveled the area. 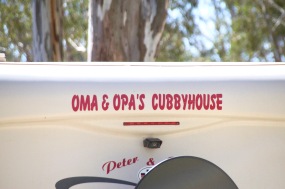 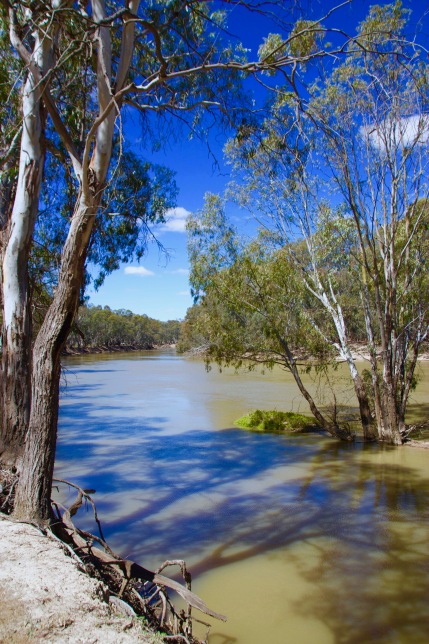 We had been told the waters around the camp site were good for fishing. We did see some dead fish left behind as we took a walk around the camp but we didn’t put a rod in. We haven’t had much luck with fishing.

On the other side of the river is Nyah West with a population of 90. Nyah West boasts the most intact streetscape by the national trust. To me it looked like just another street (I hope I was looking at the right street.) 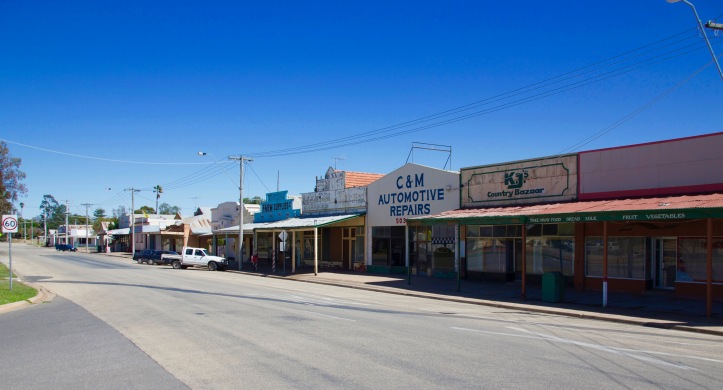 The town was established when the railway line was extended from Swan Hill to Piangil in 1915. It passed west of Nyah so it only seemed right to name the new town that popped up as “Nyah West”. The area is known for wine and dried fruit. A packing shed was built at the railway line making the new town a business focus for the area. Those days have long gone now, progress has taken the life from the small town.

In the centre of Nyah West there is a sculpture garden displaying Watson’s art. Jim is a retired farmer form the area, he saw some similar artwork at a Country museum and decided he could do the same thing. So he did, and as they say the rest is history. It has all been made with scrap wire. I was impressed with the artwork. Ok it’s not something I would like to have in my house or garden but I can see the work Jim would have put into each peace. 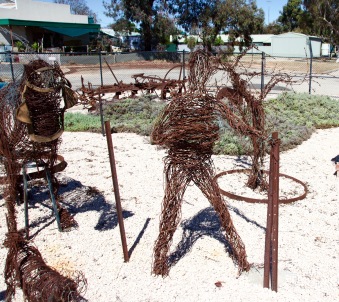 After looking around the town we ventured on to the Ring Tree. It is one of only a few that have survived the test of time. It is an old Aboriginal sign thought to be a boundary marker or it could mean a safe river crossing. The young branches of a tree were tied together in such away as to force them into growing into a circle. If we didn’t know what we were looking for we would have missed it.

We stopped and had lunch at Tooleybuc. I read how the post office opened in the small town in 1873 and then closed in 1885. A town without a post office is small. (The postal service continued, moving to be part of the general store so the locals didn’t totally miss out.) Why did the town survive? Tooleybuc is the home of another lift span bridge. It made a large impact on the farming area as it opened up NSW to Victoria. It was built by Percy Allan in 1925. He was said to be one of the best bridge builders of the times. Percy retired the following year after a career working on the Sydney sewerage system (among other things) and designing 583 bridges.

After lunch we spent some time relaxing in the park. 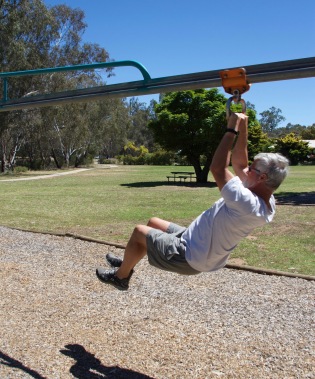