When we had been in Mission Beach we had talked about going to Paronella Park but then Adrian had his back problem and we left before we could take the time. It is a little expensive but you do get your van park site thrown in for free. There are powered and water sites but not many so you need to book well in advance for them. We didn’t. We just rocked up. 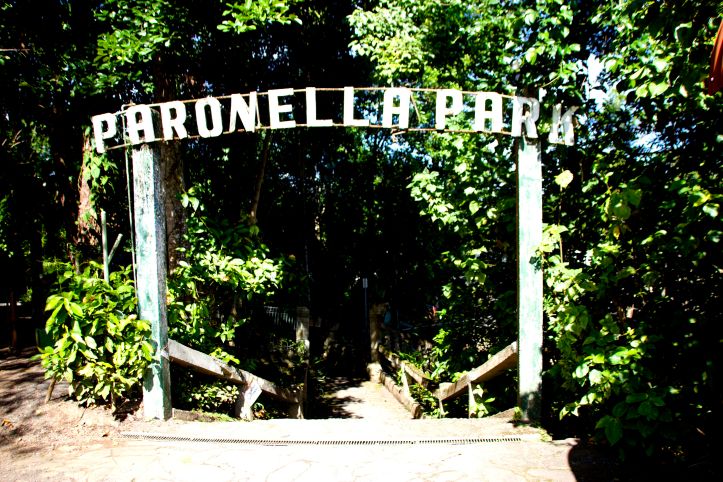 We were given a choice, we could park behind the local pub, which was only a 10-minute walk away, or we could stay in the overflow parking area for the park. We chose to stay in the overflow. One, we were already there and second, we thought it would be quieter. This time it was us parking close to our next door neighbour. In our defence we were guided back into the spot by a parking monitor.

We were told there was free Wi-Fi for the van park, great; no it wasn’t strong enough for me to put on a blog. It wasn’t even strong enough to connect to. It kept telling me it was connecting but it lied. It never did. I did get several smiles from different people at I walked around the van park holding my computer hoping for service.

As part of our ticket we had access to the park all day and the next. We could walk around on our own and/or take a tour. There was also a night time tour, we had to book for as it was very popular. We booked in for the night tour and waited for the next tour to start. It wasn’t long as they leave every half an hour.

We got to learn all about Jose Paronella and his dream to build a castle. We were starting at the house where he and his family lived. It is a little museum now with old photos and the odd item of interest, like the projector used in the theatre.

Jose arrived from Spain in 1913 and first settled in Innisfail. Like a lot migrants he come to Australia with the idea to make his future. He left a fiancée behind promising to return in 5 years. Jose worked hard for 11 years building his wealth buying cane farms improving them and then selling them. He eventually came across the virgin forest alongside the spectacular Mena Creek Falls. It seemed perfect for his dream he still carried with him. He returned to his home country to find his fiancée had married another. Determined to sail back to Australia with a wife he proposed to the younger sister. A year later in 1929 the newlyweds set sail and when they arrived back Jose purchased the land. To start with the locals thought Paronella was mad. He had made his money so they thought he should have retired; instead he started on building his life long dream. For the next five years, mostly on his own, he worked to build that dream, spending more than £20,000 on materials over those five years.

Jose first mission was to build the 47 steps staircase to the lower level so he could move building materials down the hill. 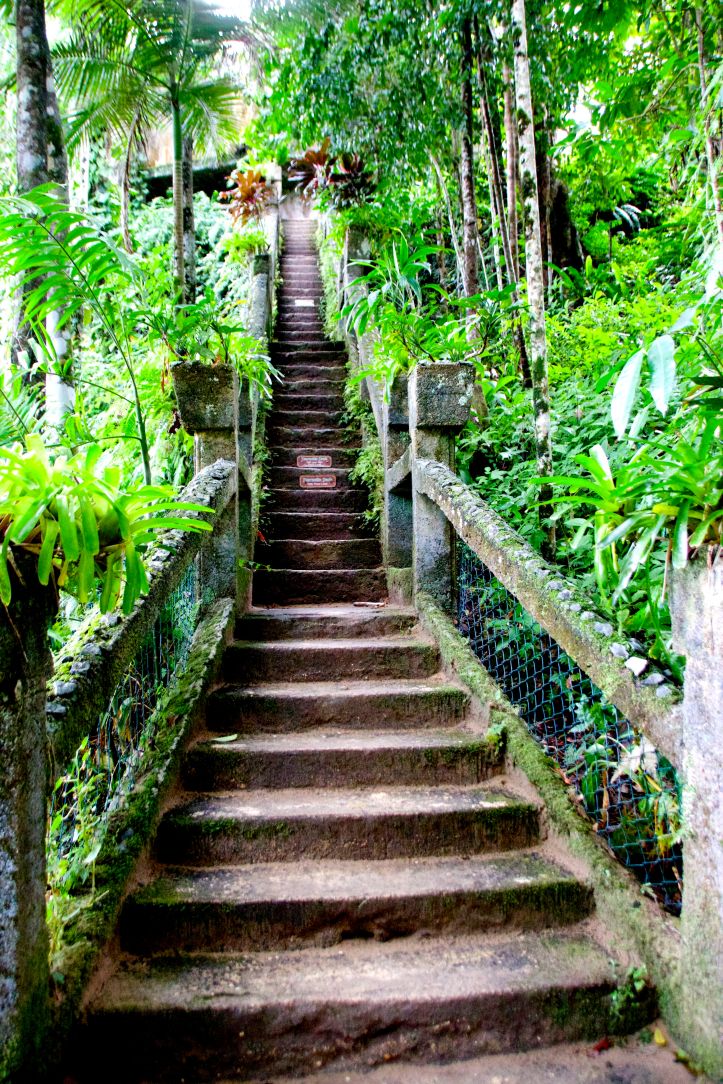 Inspired by his childhood memories of a Catalonian Castle, Jose set to work building one. He then move on and added an entertainment area to match the castle. A ballroom was built with room for a live band. A massive ball of mirrors spun from the ceiling to reflect a sizzle of pink and blue lights. The ballroom was used as a theatre room during the week with great crowds coming for the picture show. After that was completed Jose started to build a wonderland with a picnic area at the lakeside and tennis courts, tunnels and bridges to allow the guests to wind their way though an amazing range of tropical plants and trees, thought to be over 7,000 different varieties set over 15ha (13 acres).

Along with the castle Joe built an Engine room, which housed North Queensland first hydroelectric plant. The plant first started producing power in 1933 and it powered the park when it opened to the public two yeas later.

It wasn’t all clear sailing for the park. It has had its fair share of difficulties. The first big disaster was when some logs from upstream ware washed downstream destroying the refreshment rooms in 1946. The rooms were rebuilt and the park opened again 6 months later. Two years later Paronella passed away then in 1967 his wife Margarita passed on. The park was handed down to family and stayed in the family hands until 1977 when it was sold. The castle was almost destroyed by fire in 1979, leaving only the walls of what had once been. Then in 1986 Cyclone Winifred played with the park leaving behind more damage blowing down many of the large trees. The park was abandoned until 1993 when the new owners saw it, fell in love with it, and purchased it. The new owner contacted the Paronella family to help keep Paronella’s story alive. The story of disasters was not over yet. Cyclone Larry tried to crush the dream in 2006 but the park stood firm, well almost. The new owners are bringing the grounds back to what they once were. Not an easy task considering the size of the park, plus there are steps and bridges all over the place in the grounds to work on as well.

In 2009 the new owner decided to refurbish the old hydro turbine and put it back to work supplying power to the park. You can take a tour of the engine room but we didn’t.

It was amazing to look at what was left and realize what it would have looked like in its hay day. We had been told the park was old and run down with all the buildings crumbling away and not worth the trip. Yes the buildings were crumbling but for me that was part of the charm of the place. The ballroom with the stage for the band over grown or the kitchen area both left open to the elements. (It would have been fun to explore more into the building but they have been roped off for safety.) I just felt the ruins had a magic charm to them. 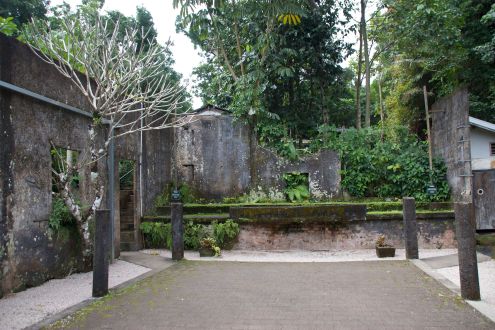 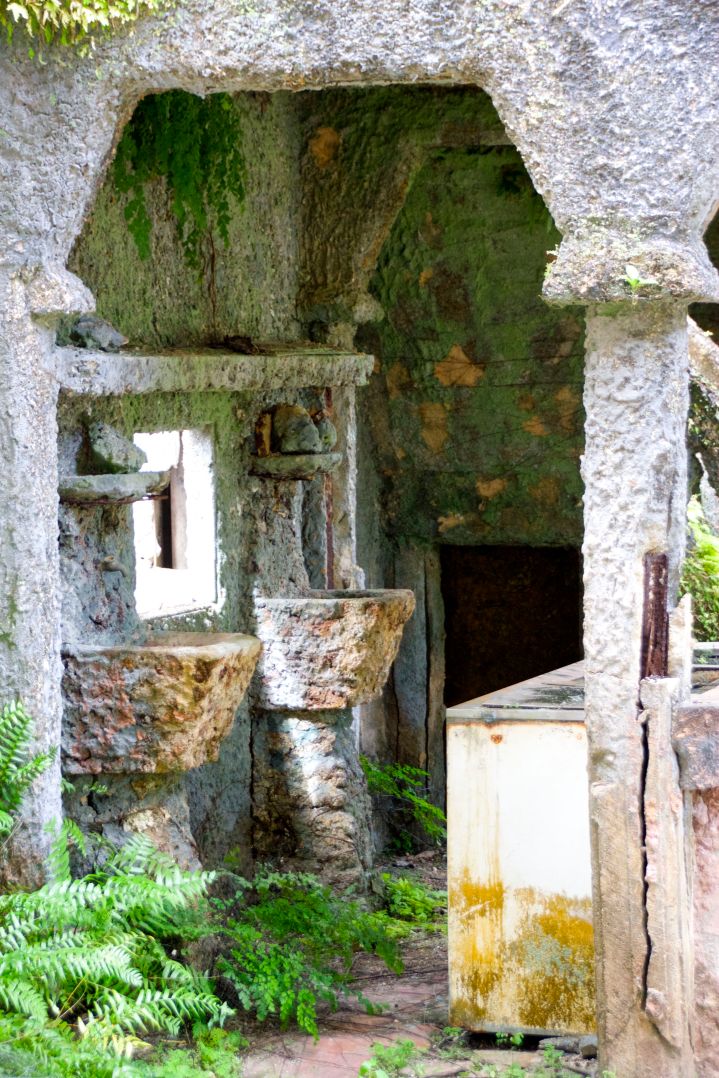 We took the 47 steps down to the picnic area at the lakeside with the Mena Creek Falls as a backdrop. It was very obvious why Jose wonted to extend the flat area out to make the picnic area. Jose had planed to install an independent telephone system in the tunnel and the grounds of the park giving the guests the ability to order any refreshment they may require. Part of that refreshment was bottled water. Bottled right from the Mena Falls its self. Jose had tasted the mineral waters of Spain, France and Italy and felt the waters from the falls were superior to them all. Why not offer it to his guests as well.

The river was full of fish we could feed (we had been given a small container of pellets when we started the tour.) The fish were ready for lunch and I am sure they would have taken the food right out of you hand if they could have jumped that high.

From the falls we made our way down to the refreshment area.

You can still go to the top of the building and look over the grounds. With the forest all around me for a brief second I did feel like I had travelled to a different world. I come from Western Australia. We are the driest state in the second driest country in the world so the lush greenery is something different for me. 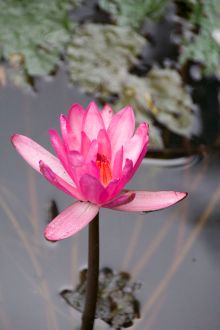 The refreshment rooms were built it 1933 and were still in use until 1946 when they were damaged by flood. Then Cyclone Winifred damaged them some more in 1986. Around the outside of the building Jose had built-changing rooms. Ladies to the right men to the left. They seemed very small to me, I couldn’t see me changing in an area so small. 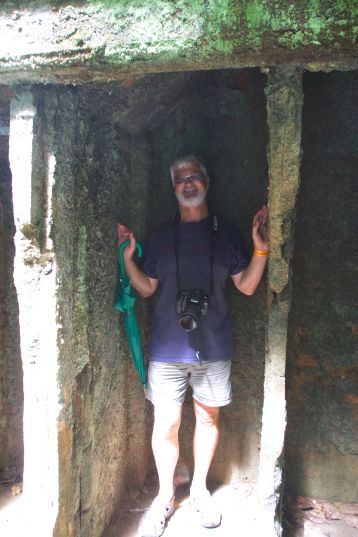 After everyone on our little tour had taken there photos of the refreshment building (which is a favourite for wedding photos,) we made our way though the forest down to Teresa Falls. Not only was building the power station a great achievement but Jose cut his way though a hill to reach the miniature falls he had named after his daughter Teresa. The idea was to save the ladies the walk to reach the waterfalls. He had intended to light the tunnel and to turn it into a museum and a bit of a love tunnel as well. Unfortunately it was never completed. Now the tunnel is the home to over 500 Bent Wing Micro Bats. They are good to have around, as their main food sources are mosquitos, which they can eat up to 500 in an hour. The tunnel is all locked up now for humans.

This is where our tour guide left us so we could wander the grounds.

The group split up and we wandered down to the lake. We had been told there were were some perch and bream along with some tortoises and eels. We still had some fish food left over. It didn’t take long before the tortoises and the eel to came for lunch. The eel was massive. It sent a shiver up my spine just looking at it slivering through the branches in the water. 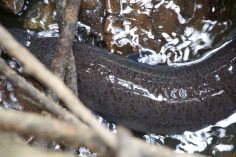 After we had feed the eel and tortoises we made our way back through the park to the suspension bridge. It was built in 1988 as a bicentennial project. It gave a lovely view of the picnic area. We took a walk across and down along the river.

When we were coming back there were several Chinese looking tourists on the bridge in front of us. One of the men started to sway the bridge. Within seconds of the bridge starting to swing one of the women in their part dropped to her knees screaming. I don’t think she was impressed with him. (Neither was I but at least I didn’t scream.) It took the whole group to coax her up and to continue on to the end. They kept on looking back at us. We just waited and smiled. I think they would all make the man pay for his actions later. Yes I did have a laugh about it after I was off the bridge.

After the bridge we went back to the van to wait for our night time tour. The group was a little larger this time. When the clock ticked eight we were off. We retraced out steps down to the Mena falls then down to Teresa Falls and back up to the refreshment area. It was lovely to see the park lit at night. I should have brought my tripod with me. It is under the bed and is a bit of a hassle to get it out but after seeing the magic of the gardens at night I am kicking myself I didn’t make the effort. Amazing. 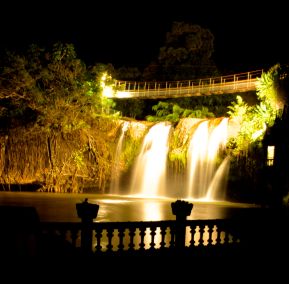 I loved the park and I am amazed to think all the work that went into the making of it, so much forward thinking. Jose was asked more than once why he built the park when he could have sat back and enjoyed his retirement. He would always answer, “It is because I wish to do something. I travel and see the world. Never do I see anything so beautiful as places you have in Queensland.” An inspiring man and an amazing park.