The next day saw us driving to Wentworth to see the prison. In the 1850’s Wentworth was starting to be a thriving port to the river boats and is one of the oldest settlement which sits on the junction of the two largest rivers in Australia (Murray and Darling.) Thirty mounted native troopers as well as Twenty-six police patrolled an area of over 600 kilometres. Before the gaol was built prisoners were handcuffed to a tree trunk using heavy bullock chain, later a slab hut was built. When the slab hut had been increased to three rooms it was decided to build the goal. The gaol was built in 1881 and closed in 1927. 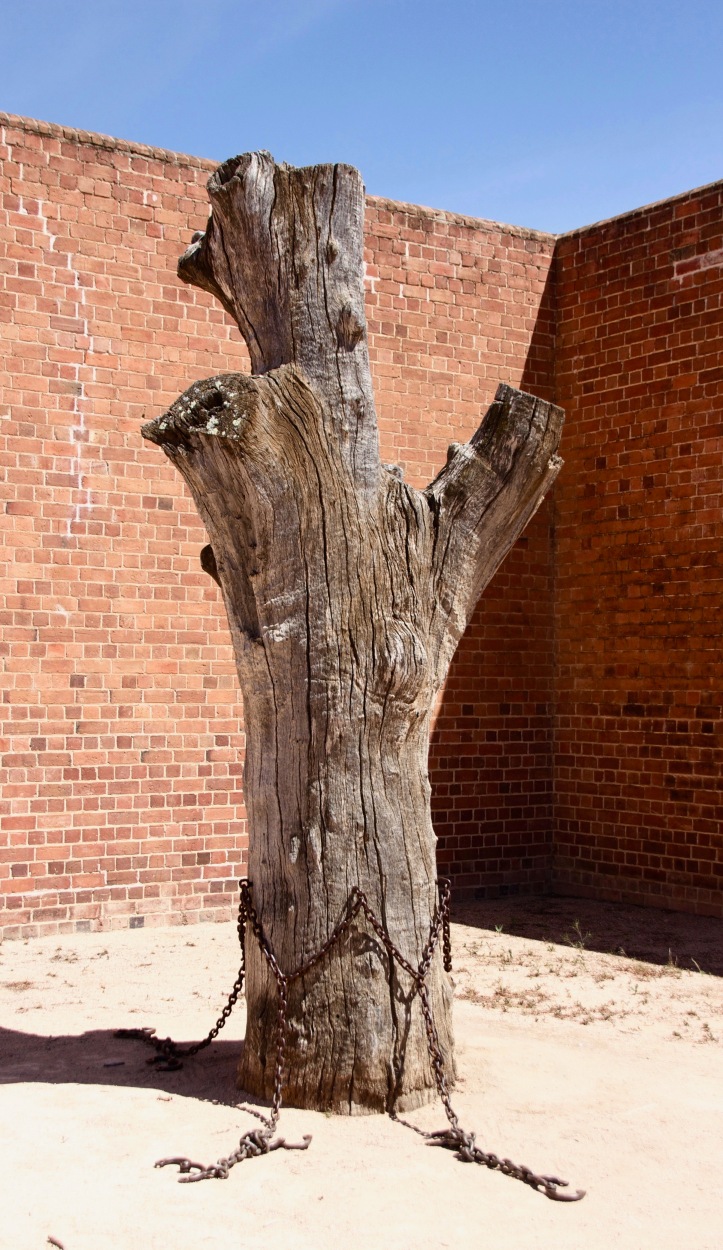 It was an interesting time, as a town could go from nothing to something then back to nothing again in a matter of months. This is what happened to Wentworth. As time passed, Broken Hill was becoming a large mining town and the life of the river boats was coming to an end and people left Wentworth to look for the next big opportunity. The gaol was eventuallyclosed through lack of prisoners, (I wonder how many prisons can say that.)

To start your tour you walk though the Gaoler’s Cottage. Not a lot has changed with the cottage, as it still boasts some of the original features. The only upgrade is the indoor bathroom which was once a store room and the kitchen is in the old laundry. The cottage is not only the main entrance to the gaol but also boasts an antiques shop. Although the gaol closed in 1927 the cottage has always been in use. At one time it was part of the local school (1935 to 1963) before becaming a tourist attraction in 1963.

As we walked into the gaol itself we were greeted with a sign telling us how to spell “Gaol”. Then there was a brief history of the Wentworth town. The area was settled in1850 although people had been camping in the area long before then. The Wentworth shire covers an area of 2,616,926 hectares. The town and latter the gaol were named after William Charles Wentworth. He was born in 1792 and died 1872. He made an impact in politics and helped draw up the Australian constitution. 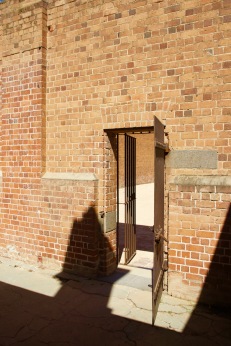 A little bit of information on the gaol. The bricks, and there is estimated to be a million of them, are all handmade and are smaller than the standard ones we use today. Some of the bricks hold finger marks and some tally marks. Most of the wood for the door and windows came from Victoria. The wood was loaded on to a train and when the line ran out it was transferred to bullock wagons for the rest of the journey. It is thought the slate for the roof arrived through the Adelaide port then rail, then riverboat.

Now as a museum the Wentworth goal doesn’t sparkle but as a place of interest it sure does. There isn’t a lot on display but there is a lot to read. Along with the information there is a tap still plumbed into the wall which is thought to have been made before 1875, maybe as early 1825 by the Brass Foundry in Birmingham. There is a bullet made in 1886 with 95 grains of powder and 480 gains of soft lead. Of cause being in a gaol there has to be a set of handcuffs made in 1884 along with a whipping stool (not sure if the whipping stool is left over from the prison or the school. Ha ha.) 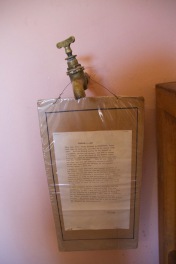 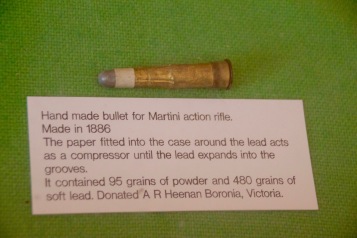 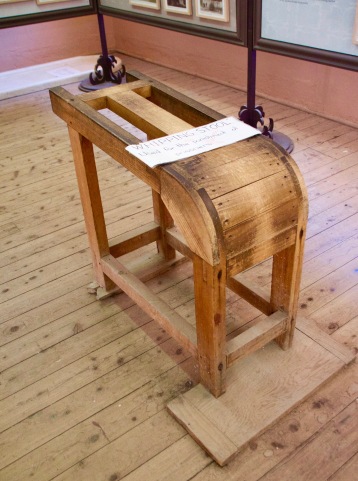 Then there are the cells. The mens block was defiantly designed for high security, with the wall and ceiling made with concrete and cement. The dividing walls are 450 millimetres thick (18 inches) with the outer wall be 560 millimetres (a little over 22 inches). The roof was constructed with a curved corrugated iron. The cells had high ceilings and windowsprotected with iron bars. Each cell was finished off with a boilerplate door. The cells were hot and stuffy in the Australian sun and freezing in our cold winters. All cells were designed to make sure no one escaped and it worked as there were no recorded escapes from the gaol. 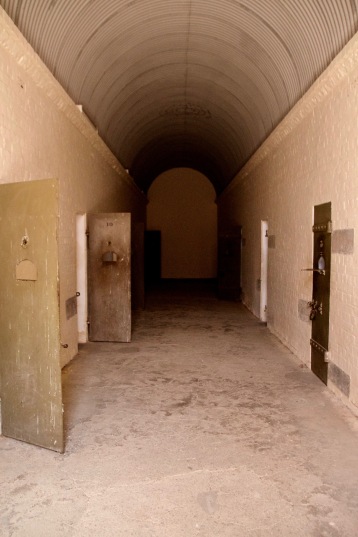 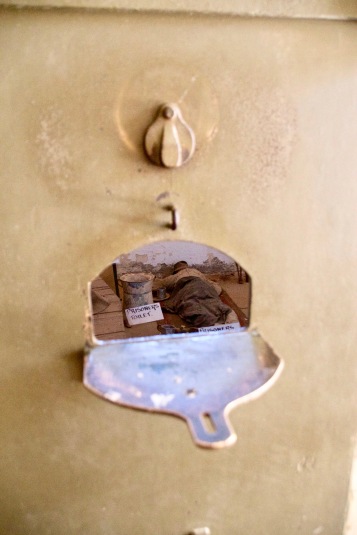 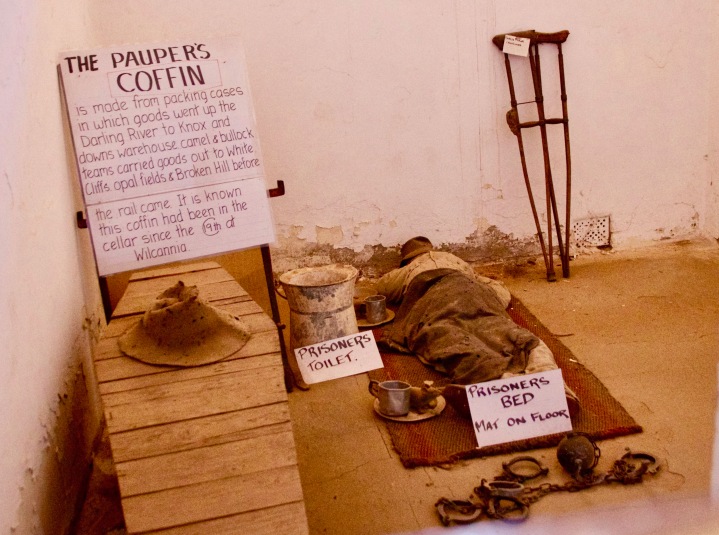 Depending on the number, each cell would have one, three or more prisoners at a time. Never two. Why? If there was a problem it was though to be easier to work out who was lying if a third person was a witness.

I thought it was interesting to read that two of the ten cells in the mens block were larger than the rest and set aside for ‘drunks’. The drunks’ cells were often filled with the local shearers, the crews of the riverboats, bullock drivers, stockmen, or any hard working man who went on a night of hard drinking. The large cells could hold up to 18 men trying to sober up. The drunks’ cells were placed at the end of the block so the guards didn’t have to put up with the singing and the smell of alcohol. 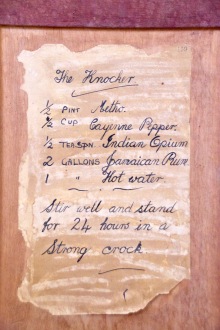 Maybe the most notorious prisoner who spent time in the drunks’ cell was Captain Starlight. Some people may know the name from Rolf Boldrewood’s novel “Robbery Under Arms,” but it is thought the fictional character was based on a real live bushranger of the same name.

The real Captain Starlight is a bit of an enigma, there are many stories about his life and his death. Some true and some are … well why let a good story interfere with the truth.

One story had the Captain stealing a thoroughbred horse in South Australia. He made his way to Wentworth where he camped at a billabong, (now know as Thegoa Lagoon.) After setting up camp he started to train the horse for an up and coming race with a heavy purse, the Captain had his eye on.

The Captain worked up a thirst and decided to make his way into Wentworth for some liquid refreshment and some fun. The fun soon got out of hand over a young lady and ending up with blows being thrown. When the dust had settled the Captain was sentenced to 48 hours in the drunks’ cell. The Captain gave a bogus name but the police thought there was more to the prisoner and sent a telegraph to South Australia for more information. South Australia immediately sent sometroopers. Unforgivably for them or good for Captain Starlight the troopers arrived at the gaol three hours after the Captainwas released and by the time they had moved on to the billabong the Captain along with the thoroughbred had moved on to parts unknown.

Another story is that on the 22nd December 1899 the Captain may have accidentally killed himself by drinking potassium cyanide thinking it was medicine. Potassium cyanide is used in gold mining, it would have reacted to the iron in his blood by thickening it. It would not have been a quick death.

The old gaol is said to have some ghosts and more than one team of paranormalists have walked the corridors looking for them. Results have turned up on EMF detectors (ghost are said to cause a fluctuations in the EMF and the machine pick sup on it. – Yeah I don’t know what EMF is either so I looked it up, it stands for Electromagnetic fields – still non the wiser.)

Have there been any sighting? Different people have said to have smelled aromas like the baking of biscuits and pastry with a strong aroma of ginger around the women’s cells. A medium reported seeing a woman in a sack like dress and bare feet and they said they received the name Monica as well as a man called Eddie ‘The Horseman’.

Probably the most frighting story tells of a shadow in the form of a person appearing to three members of a research team in one of the cells. At the time the shadow appeared ,the EMF machine recorded fifteen times the safe level. Cameras captured orbs before they stopped working (with full batteries). The cameras started to work again as the three orbs left the cell.