It wasn’t a very quiet 2 weeks. With all the sight seeing and all, but the most excitement we had was when the dogs baled up a fox beside the house. There was nowhere the fox could go. Farmers have a problem with foxes; they kill the chickens and newborn lambs. We tried calling the farmer on the two-way but received no response.

The ideal situation then was we should kill the fox, but how? We had a quick look round in the shed and came up with nothing. We know the farmer had a gun but that would have been for him to use not us. Our best move after discussing it at great lengths was to let the fox go. The dogs didn’t like that idea at all. We know we would have to pull each one of the dogs away and change them up first. One dog down, no problem. The second dog who is older and wiser was not impressed with what was happening. You could tell she knew what we were going to do and was not going to let it happen. It was her job to protect the farm and we were not going to get in her way of her doing her job. She was really strong in her determination and it took both Adrian and myself to finally pull her away. It gave the fox the chance it was looking for and he took it to dashing away. 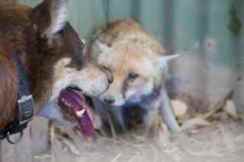 The fox did looked old and half starved. It did feel sorry for the animal but that is the city person coming out. As far as the local farmers are conserved the only good fox is a dead fox. (Foxes are not native to Australian. They arrived around the just after the rabbit did and in their time in Australian they have desecrated the local wild life.)