After 10 days away we traveled back to my brother’s house to park up the car and van for two weeks while we flew to England for my stepdaughter’s wedding.

As luck would have it my nephew and niece was driving down to Sydney airport to catch up with friends who were having a stop over in Sydney on their way from Tasmania to England. There ended up being a group of us so we all sat around and had coffee and chatted. The friends left to continue their journey and we said our goodbyes as well. Thanks Luke and Sarah for the lift down.

We had arrived at the airport at lunchtime and we were not flying out until 10pm that night. By the time everyone left most of the afternoon had passed. We walked around and looked at the shops for a while and waited for our counter to open.

There was a display of Western Australian wines, which was nice to see and there were so many Australia themed items on the shelves as well. It almost made me want to buy something just to have something from Australia to take with me.

Once through to the other side we walked around and looked at the shops there. Most were the same. By this time we were hungry so started to look for somewhere nice to eat. There were several restaurants but we weren’t in the mood for that type of fare. We ended up walking the length and breath of the airport looking for a cafe serving something light. We could see several cafés on the other side of a wall of glass. We walked around and around but could not find a way through. Adrian finally asked someone who worked at the airport and we were told that was the outside. It all started to look familiar. It was where we had sat and had our coffee. We had a laugh at ourselves. We settled for a coffee and muffin.

As we walked into the plane there was a vase with flowers for the first class section. We then turned right and made the long walk past business class and into cattle class. As we walked past business class each seat had a blanket and a little pouch. I did feel a little jealous of the extra bit the business class got, I moved on reminding myself I was saving money by not upgrading, money I could be spending in England. We found our seats and to my surprise my seat had a blanket and a little pouch as well. One happy me settled into the seat.

Our stop over was at Qatar. We had two hours before we boarded again. I did think we could look at the shops but we decided to find our gate first so if we were running late we wouldn’t have to worry about looking for it. By the time we made out way off the plane and found our gate we only had half an hour before we would board again so we gave the shops a miss. (We would have 5 hours on our return. Plenty of time then to go shopping.)

I was surprised with the airport. It was the first time I has seen Qatar airport. The small bit I saw looked cold and impersonal to me. There was a lovely big teddy but it looked like it was made out of tin. There were playgrounds along the way, which was nice to see, but they lacked colour. I was impressed with the train thingy though. I know its name wouldn’t be train thingy but I don’t know what it was called. It looked like a train and it would transfer people from one end of the airport to another. We didn’t have to use it as our gate was in walking distance but I like the idea of an indoor train on the second story. 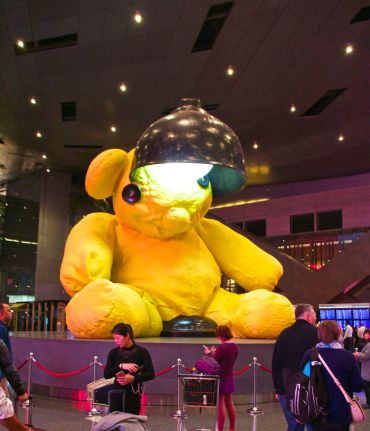 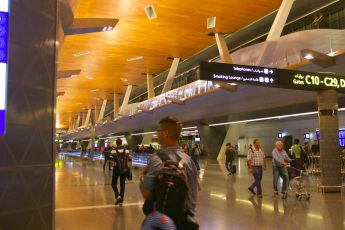