It was rather sad leaving Maitland and family. We had spent so long there with Adrian’s bad back. Two weeks after the operation it was almost as if he didn’t have a back problem. I was still driving and doing any heavy lifting with Adrian taking it easy and watch everything he did. We were really surprised with how quickly he had recovered. We had anticipated that he would be in hospital for about a week instead of just the two nights and then we had expected Adrian to be bedbound for a while. Instead we talked about canceling our booking at the Hunter Valley van park. We didn’t think we really needed to stay in the area for much longer. We were talking to some of the other vaners when they reminded us it was going to be school holidays and we may have a problem with getting a spot in some places. Plus it would be busy on the roads. Ok. We will keep our spot at the Wine Country Caravan Park for a week at least. The move wasn’t that far, only about 40ks.

We prefer not to stay in a van parks. For most part they cost more, pack everyone close together and often your neighbors aren’t very friendly. This park was no different in that respect, but the managers did try to offer more. One night a week they had a get together at the camp kitchen where they supplied snacks. On Easter Sunday they held an egg hunt for all the children who were on holiday. There were about 20 children in the van park so we had children running everywhere screaming in delight. Then there was a BBQ lunch put on by the managers. You could take something if you like but it wasn’t necessary.   The lunch was basic with sausages and patties with several different salads. Very nice especially since I didn’t have to cook it. We sat around talking to people and had great time. Dessert came out and I added some health balls, (it was ok no one would have guessed there was no added sugar in them. I even saw a young boy coming back for seconds.) What a great way to spend Easter Sunday.

Wine Country Caravan Park even looked after the pets. They have set up a little pen so people can leave their dogs while they when out and not worry about them being locked up all day. 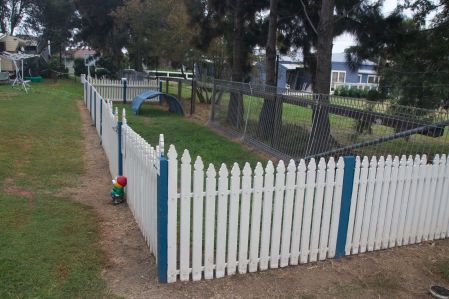 We took drives into the hunter valley going to new places and wineries. We picked up some cheese at a small cheese factory. We decided to have it that night. A good thing too as when I cut a piece I found a hair in it. Not happy. I took it back the next day expecting for a fight but the lady was lovely and apologized. She gave me another one, which was a little bigger than the first piece. Happy now. Adrian told me not to bother as the cheese only cost $5 and he reckoned it would have cost more in fuel to travel back to the business. Maybe but for me it was the principle.

An Italian day was being held in Broke. We read the pamphlet and it said it would be on (Friday,) Saturday and Sunday. We decided to go on the Friday as we figured it wouldn’t be as busy. The joke was on us. We arrived at the first winery to be told the festival didn’t start until Saturday. “But it said it started on Friday on the pamphlet.” “Lets see.” “Oh yes. The Friday is in brackets. There is a dinner held on Friday night to kick-start all the fun. So it does really start on Friday. Would you like to try our wines?”

Most of the wineries taking part in the Italian festival were closed as they were getting everything ready for the big weekend. For us it was very frustrating, as the wineries didn’t bother to take down the open signs. We drove into several just to be told from busy staff members that it was a waste of a trip. If the wineries were a part of the Italian day they showed the Italian flags. It didn’t take us long to figure out just avoid the ones with the flags. The rest were open.

One of the wineries insisted we take a walk through the vines, as we were sure to see some Kangaroos. When I saw the size of the roos I wasn’t sure it was a good idea to let loose visitors on the poor animals. They were massive and they didn’t seem to be very impressed we had interrupted their lunch. I could just imagine a tourist trying to feed one and regretting it later. 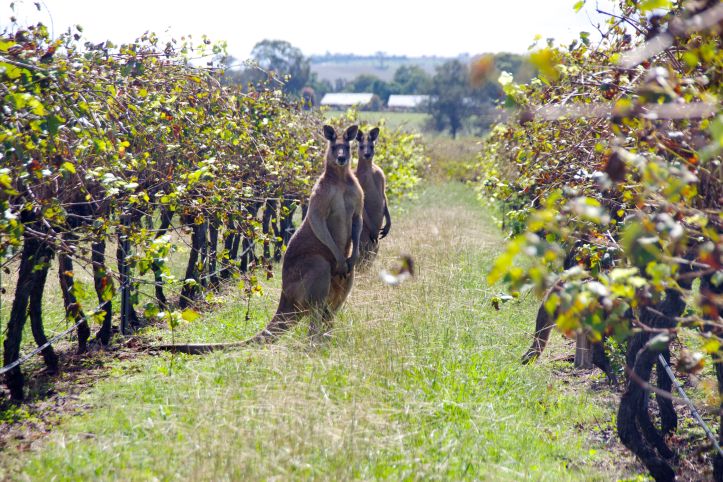 Although a large part of the Broke wineries were closed on the Friday we did have a lovely day. Broke and the Hunter Valley really do have some lovely wines. If you are interested I would say go to the small boutique wineries. Most don’t charge for the wine tasting and generally you can’t buy the wines anywhere else so you are getting something really different. Of all the wineries we went to in the Hunter Valley there were only 2 we didn’t like the wines. So that is very good odds.

On our way back we stopped in at a dessert café. We had been there once before. The first time we had a sample plate, which we shared, (well as far as my story goes I only had a little bit and Adrian ate most of it.) It was so nice. This time I was hoping to upgrade and get one each. Oh boy I was like a kid in a candy shop. Or maybe an adult in a dessert shop.  (I guess it is much the same.) It was so hard to choose. Finally I settled on a Caramel and Hazelnut Cone and a Pina Colada Crunch. They arrived at the table and I took a moment to saver their beauty. Adrian dove in straight away. Tasted both then asked me what flavor they were. I tasted both. What a let down. They really didn’t taste of anything but sweet.   The best bit was the chocolate on top. It did have a true flavour. So disappointed. Not that it stopped me finishing my share of the desserts. It really surprised me how bland the cakes were as the tasting plate was amazing.