We stopped to have a look at Rifle Creek camp on our way up to Cooktown. It is right at the turn off to Mossman so would make a great stop on our way back.

The camp was almost full when we arrived so we had to walk around to find a spot for the van. We had been set up for about an hour when there was a little disagreement outside. It seemed a new person was having a go at our neighbour for taking up too much room. We heard our neighbour had enough room behind his van to have a garden. Our neighbour really couldn’t have gone back any further than he did because of tree branches but that didn’t seem to matter to the new person.

Even though the camp was full, long into the evening people kept coming. Generally they are the wiz bangers filled with backpackers and they pull up and stop anywhere. Why are the vehicles called wiz bangers is because that is the sound you hear when they open and close the doors. The joke is you have to watch where you step when you emerge from you van as you may step on one. They have been known to park that close to vans.

We took a rest day and in the afternoon we walked into the town. It didn’t start out like that. We just when for walk down to the creek as there wasn’t much to look at and what water was there looked stagnant we kept going.

The town was another one street town. At the entry to the town there were some old ruins but as there was no information sign on it we don’t know what we were looking at.

By the time we were ready to leave the next morning the camp was almost empty.   It never ceases to amaze me just how quickly a camp can empty out in the morning. 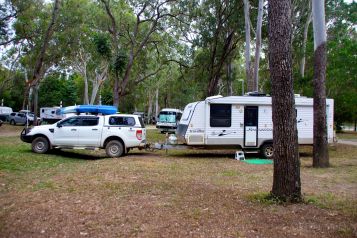 We needed fuel so we drove into the town. The first fuel depo was closed. A man was working there but he told Adrian he wasn’t going to bother with the bowsers today. (Only in the country.) No problem there was another spot. Adrian drove past it not sure if we could get in and out with ease. The road we were on came to a stop. Poor Adrian had to do a 20 point turn to get the van around with a lot of different moves, some making me wonder what he was doing. Then we had to try and manoeuvre the van into the service station, which was on top of a small hill. Not the easiest thing to do.

Once our tank was full we were on our way.