Glenreagh Showgrounds was just a stop over. We arrived late in the afternoon. As our batteries were full, we chose to go for the $10 unpowered site. The grounds were quite large so it was easy for us to find a lovely green area away from everyone else for the night. Not long after we had set up, in came three other vans that were traveling together. They must of thought as we did and we were soon surrounded. Adrian and I were outside at the time and watched them set up camp. Straight away the men pulled out a load of wood and started to build their fire.  Just as the flames started to take hold they seemed to notice us so the invitation went out to us to come join them for happy hour.

We did feel like we were the odd ones out though as we put our chairs around the fire. We were the only couple without at least one dog. All the dogs came to say “hi” to us before they were dressed for the cold night air. So cute. 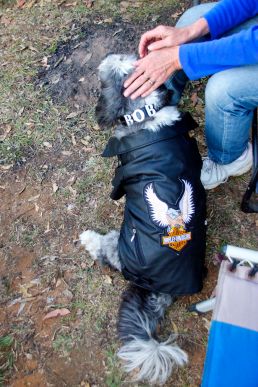 As you do at happy hour, we talked about all the places we have been, the good and the bad. It was a fun evening.

After happy hour (which always last longer than an hour) we grabbed a quick dinner then set about planning where our next stop was going to be. We didn’t have long to go before we had to be in Maitland for my older brother’s birthday. We had a special job to do as a surprise for him so we had to be there on the Friday before the party. It had been almost a year since we had last seen my brother. Normally we never plan too far ahead, only about two to three stops at the most. As we travel we hear about some great places to see and bush camps to stop at from fellow travelers thus even the few plans we make often change.

After all the planning was done we watched a movie and had an early night.