We made an early start as we had big plans for the day. The War Memorial was going to be our first stop. 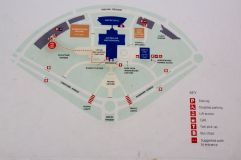 We started at the Sculpture garden along the walkway, to captain Reg Sander’s courtyard, which displayed plaques dedicated to different sections of the military. 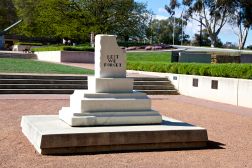 Then we walked past the memorial dedicated to merchant seamen. The merchant marines offered valued support to the military, often carrying troops and vital supplies. The enemy regularly tagged them, as the boats were generally slow, poorly armed and often loaded with dangerous cargoes. The support provided by these brave men was vital to the success of the war effort so it was nice to see the dedication.

At the front of the building was a sculpture of John Simpson.

I was raised on the heroic story of the “man and his donkey”. John Simpson Kirkpatrick was born in England in 1892. He had a great liking for animals, donkeys in particular. He worked as a Merchant marine and deserted ship at Newcastle New South Wales when he heard about the war with Germany. He felt he might not be accepted into the Australian army so he dropped the Kirkpatrick from his name. It was in Perth WA that he was accepted and chosen as a field ambulance stretcher-bearer. John took part in the landing at Gallipoli. The men landed on the wrong beach (now know at Anzac Cove) on 25th April 1915. To start with because of the steep terrain, John and his fellow stretcher-bearer carried the casualties back to the beach over their shoulders. On one such occasion John spotted a group of donkeys and enlisted them to help. Under the continual shellfire he would use one of the donkeys to carry water up Shrapnel Gully to the fighting men then bring wounded men down to the beach. It wasn’t long before he was famous among the Australian troops. He was often seen singing and whistling as he ignored bullets flying past him. Sadly after less than four weeks he was fatally wounded. Shot by machine-gun fire while carrying two wounded men to medical aid.  He was buried on the beach and not only became a hero but also a legend.  The story goes that in the 24 days John was at Gallipoli he and his donkeys amazingly rescued over 300 men, (some say it was only half that number. Does that matter? 150 is still a good number.) In those 24 days he used at least five different donkeys (most of the donkeys were killed or wounded in action.) After John’s death some of the other stretcher-bearer started using the remaining donkeys. 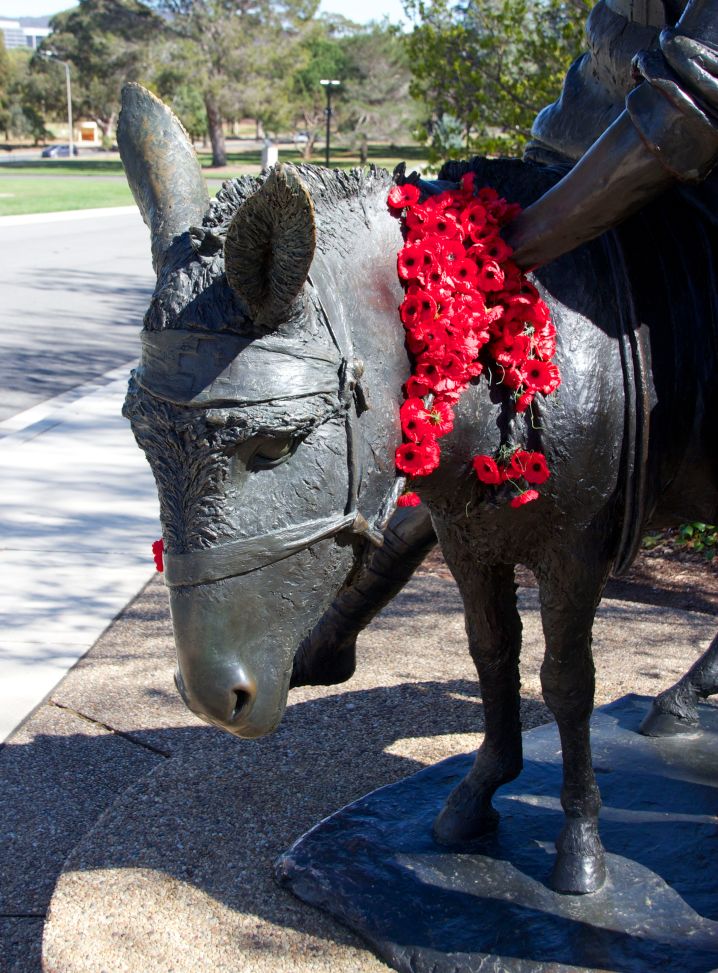 On the top of the memorial step I turned to look at the view. Not bad. We would be heading to parliament house in the afternoon. When Adrian was young his family made the journey across the Nullarbor and stood at the very same spot. (He is the cute little one.) 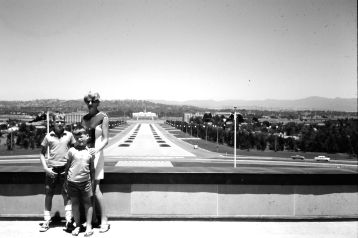 We turned and walked into the Memorial Courtyard to see the Eternal Flame set to the far end of the Memorial pool. It was first lit on 25 April 1988 on the occasion of the Australia’s bicentenary. Rosemary had been added among the shrubs (for remembrance) along the walkway that takes you to the Tomb of the Unknown Australian Soldier. 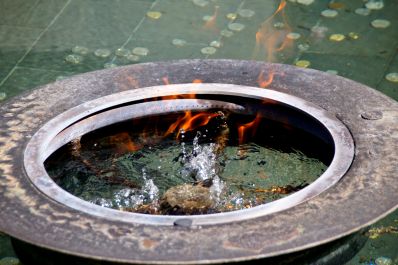 What surprised me about the flame was the amount of money that had made it’s way into the water. Can the Eternal Flame in the memorial pool be a wishing well?

The Memorial is a two-story sandstone building with a copper-clad dome and was officially opened on Remembrance Day on 11 November 1941.

The long cloisters on both sides hold the “Rolls of Honour.” There are 102,185 names edged onto a series of bronze plaques in honour of the Australian servicemen and women killed in conflict or on peacekeeping operations. The names date back to the Second Bore War (11 October 1899 to 31 May 1902) and the Boxer Rebellion (2 November 1899 to 7 September 1901.) The entire west wing of the upper level had been dedicated primarily to World War I, listing 66,000 names. The east wing has been dedicated primarily to World War II and conflicts since.  What is interesting about the roll is it shows names only. No rank or other awards are listed. Why? Because in death all people are equal.

Family and friends have added poppies to the gaps between the bronze plaques of their loved ones. (It is nice to know the poppies are only removed when the plaques are to be rewaxed for there preservation.)

Wow. I don’t know about anyone else but seeing all the names with the poppies next to them pulled on my heartstrings. When I was young my parents went to Canberra and visited the memorial. My mother tried to look for my Great Grandfather’s and my Great Uncle’s names. When she couldn’t find them she asked for help to locate them, only to find out the names listed were only of those who lost their lives fighting. With so many names she had thought all military people were listed. As both my Great Grandfather and Great Uncle came home their names were not recorded on the wall.

Personal Note: My Great Grandfather (who we call Big Pop because of his height) was Private Albert Victor Rose, MM, 1st AIF. He was awarded a military medal for bravery in a battle where 2,400 Australian men were wounded or killed from the 3,500 Australian men that took part.

Written in the despatches after the battle “In a counter-attack by his Battalion on strong enemy positions south of Villers-Bretonneux on night of 24/25 April 1918 this man (my Great Grandfather), when the advance of his platoon was held up by a belt of wire entanglement went forward under heavy rifle and machine gun fire and cut a passage through the wire. While doing so he was wounded, but carried on until he had completed his work. By his gallant action the platoon was enabled to continue the advance.”

I was eight when he passed on and it was only then the story of his bravery started to be told to our family through his personal papers. We learned he was the third man to try to cut the wire with the other two men that had gone before him being killed. It must have passed though his mind that his chances of surviving were very low yet he continued. We don’t really know much more about this event or the time he spent in the War. Like most of the men who came home he chose not to speak about what happened. 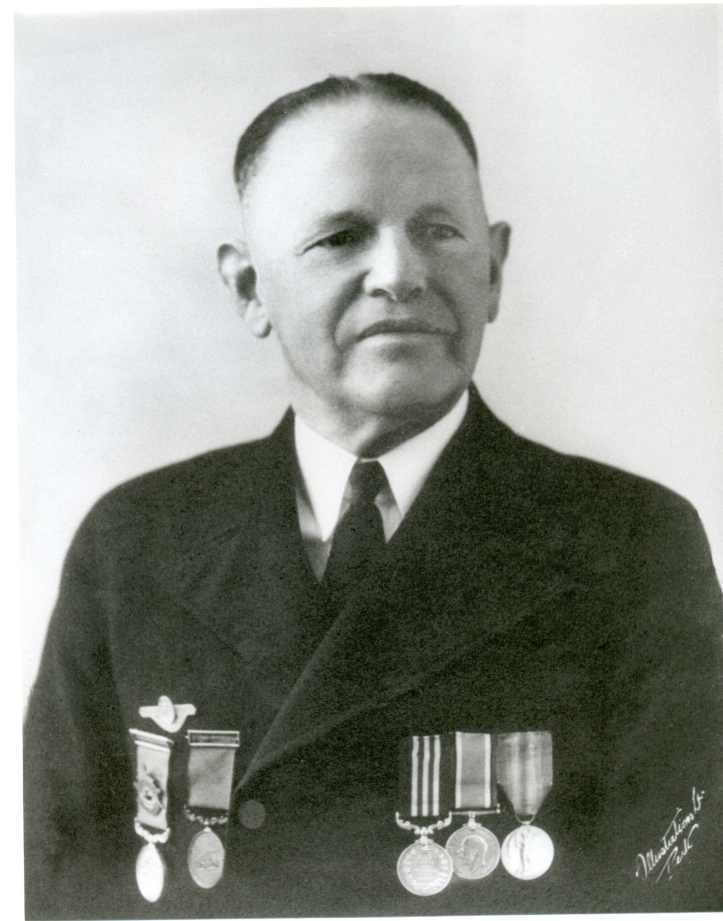