We spent another night at Wellstead Bush Camp enjoying the hot showers and flushing toilet. From there we went to Betty’s Beach. 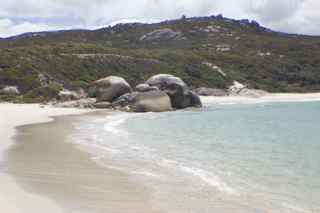 Betty’s Beach is small with some grass areas and some private fishing huts scatted about. You could fit a big rig in but you would have to get there first. Getting in was ok but the road is quite steep and we were concerned about getting out. (We are still getting used to the caravan.)

We were there for a night before friends arrived. We don’t really camp or holiday with friends so for us it was something different. They have a camper trailer, this gives them a big advantage over us. They found a little haven closer to the beach in the bushes. On their first night they invited us to dinner. We celebrated Christmas with 2 bottle of Champagne. (You have to celebrate something if you are drinking Champagne.) It started to go cold so Adrian walked back to our camp to get a jumper. A young man asked him for help as he was bogged on the beach. Adrian came and grabbed Greg and they went to help. The poor guy’s Ute was bogged up to the axel. After realizing it was going to take some time to get the vehicles out Greg and Adrian thought it best to wait until morning to start the rescue operation sober. The poor guy and his girlfriend were going to camp on the beach anyway so it wasn’t too much of a problem for him.

Alan and I had almost finished cooking dinner so it was good timing. As we sat and ate some of the wild life came out to investigate, the magic of camping.

At 8:30 am the next morning we all wondered down to where the bogged Ute was.   The young couple was still in bed.

The men had a better look at the situation. It was decided to dig away some of the sand and then let the tires down. It was agreed we would use Greg’s 4WD to pull the Ute out. He backed his vehicle down to the beach, as he didn’t wont to take the chance of trying to turn around on the beach and getting bogged as well. We joined our two snap straps together with a roll of newspaper between them saving them from fusing together.   After we dug most of the sand away the young man jumped into his vehicle. No go. Greg and Adrian reassessed the situation and Adrian replaced the young man in the vehicle. With in minutes the vehicle was out. The young lady gave the young man a kiss to congratulate him. Adrian turned to Greg and said ‘Why is she giving him the kiss we are the once that did all the work. 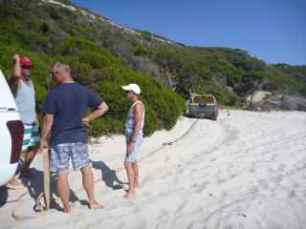 That night as we lay sleeping hell broke lose. (No I am not being dramatic.) A woman started screaming abusing at people. She started knocking on caravan doors. When the people didn’t come out she started cursing them. A couple in a mini van offered to help and drove to the top of the hill to call the police. The police arrived and took her away. They then came back and took the man she was with away and left her. We found this out the next morning as we started talking to other people in the camp. The man came back latter to pack everything up and Adrian heard the story. The man was a taxi driver from Kalgoolie he had decided to take some time off before Christmas. He had known this woman through friends. She asked him if she could come with him as she wonted to get away from the drug scene. He had agreed. She had slept in his tent and he slept in his car. She had woken him up by banging on the window yelling at him. He told Adrian she was now in hospital. This will be one story we will tell friends, ofcouse we will be beefing it up to make it more interesting.

That night we invited out friends around to our camp for dinner unfortunately we had run out of gas so we had to go to their camp with the food. It was a fun night. I sat back and let the 3 men cook with the thought it take 3 men to do the work of a woman. Ha ha. What I like most was that one of them is a fantastic chef and it dose show in the meal. 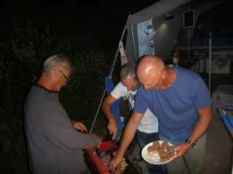 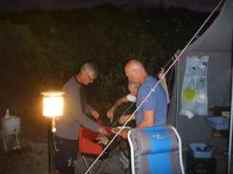 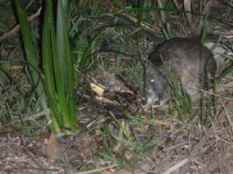 Our furry friends call on again.