Dumbleyung has a transit park at the local showgrounds. There is a large oval like area. You could fit about 100 or more van without any problem. We were the only ones. It is a bit of a walk to the toilets but hey it is for free; you can’t expect to get hot showers everywhere you go.

We parked up and had a drive around town. As it was Sunday everything was closed. We did have a quick look at one of the local pubs. To start with we thought it was closed down but as we were looking we realized it opened at night. It was built in 1911. It didn’t look like much had changed. 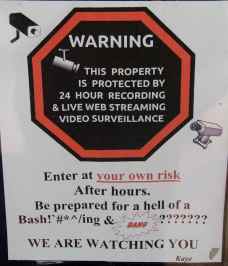 It had started to rain so we just made ourselves busy in the caravan for the rest of the afternoon. The rain continued the next day so we decided to do some cooking to keep us busy. Adrian made some mini muffins and I made some  zucchini muffins. There isn’t much room in a caravan at the best of time but when both of you are working it was mess to say the least but fun. The next morning started with grey skies and a hit of more rain. We decided to take out change and go see the lake. Dumbleyung is the home of the Bluebird. For all the foreigners or the young: Donald Campbell set the World Water Speed record on the 31st December 1964 in a boat called Bluebird on the Dumbleyung lake. The name for the boat “Bluebird’ came from a story about children looking for the Bluebird of happiness. Donald reached up to 500km an hour on his last run. A massive feat considering it happened over 50 years ago.

At we arrived at the lake it started to rain again. We stayed long enough to get soaked while looking at a misty lake. The weather was a bit of a let down. It rained most of the day on and off making it hard to go do anything. This time instead of cooking we watched a movie. 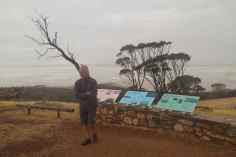 It was about 8pm at night we heard a car. It seemed to be driving around and around us. You hear horror stories about bad thing happening to people in caravans. We were the only once at the shouwgrounds. What do they say in the moves? “No one will hear you scream.” When the car stopped just out the front of our van we emerged out hoping to take the bull by the horns before it took us. To our relief it was 3 young back packers trying to find a dry spot to set up their camp for the night. They were looking at the ground with the light of a mobile phone and a pen torch. They had thought we might have had the driest spot so wanted one close by.   They were gone before we were up the next morning.