We had stayed at Wellington Dam before at a place called Honeymoon pool but that cost money. I think it was about $7 a night for the van. Not a lot but we decided to go round the back of the dam to a bush sites. Like a lot of bush campsite there isn’t a good map to be found. We put what information we know into our GPS system and headed off. We missed the first turn but the GPS recalculated and said we could continue on. The road got smaller and rougher and turned to gravel. The GPS said to keep going only 12 k further. We started to go up a very steep hill when we decided that maybe it wasn’t a good idea, as the road seem to turn into a track. There was nowhere to turn, meaning we would have to back the van down the hill for about 3 k on a winding narrow track. We looked at each other both know it was going to end in tears. I got the little radio out and moved to the back of the van to be ready when a small 4WD came down the road. Adrian tried to move out of the way but there really wasn’t any room to move to. This didn’t worry the 4WD. He just drove around us, over small tree and bushes. He stopped and asked us if we needed help. He was looking at me when he asked. I didn’t think I looked that frazzled but I guess I did. Adrian explained what we were going to do and when we were heading. He told us that we could continue up the hill for anther 2 k’s and there was enough room to turn around and if we wanted he would show us how to get to Wellington Dam. We said it was ok we could find the way ourselves and thanked him for is help. I stayed where we were and Adrian went and turned the van around.   When we arrived back at the bottom of the hill the 4WD was there waiting for us to make sure we were ok. We thanked he again and went on our way. It was a lovely surprised that this stranger was so nice.

We made it back to the turnoff we were suppose to take to start with. One of the problems with Wellington Dam is there are a lot of track without signpost to tell you where you are.   Unless you are a local you can easy get lot. Our information was to go to the end of Write Road. We ended up in a small semi clearing. Nothing seemed to be even. There was one small flat bit. Adrian backed the van in. Perfect. Adrian was going to leave the van attached to the car but I wanted he to take it off. The car was at such an angle I didn’t want the car to roll down the hill that we were on taking the van with it. Adrian told me the van weighed 3 ton and there was enough wait there to hold the car where it was. I won.

We stay at Wellington Dam for a week. We canoed, read and took walk along the water. Now if we ever answer one of those ads we can say with all honesty, we like canoeing, reading and taking long walks by the water.

We didn’t know it at the time but it was marron season as well as Australia Day long weekend. There was a lot of campers but they had scatted themselves along the waters edge. We had several people asked us if we were marroning as they didn’t want to interfere with out nets. There were surprised to know were not marroning just canoeing.

The water was lovely and quite clear. You could see submerged old tree stumps as you paddled around and because there are hills all around the dam, it is quite sheltered. Even with everyone there it was still very peaceful.

We drove into Collie for a day. I use to live in Collie many years ago. A lot of work has been completed in the town to modernize it but the shops still look the same. To me Collie seem like a town trying to be something special but deep down it’s not. 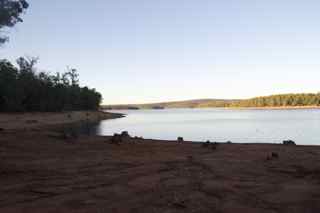 Being in shade for a week didn’t let the solar panels work well. Our batteries were not charging more than 60% during the day. We had used the generator twice. I took advantage of the gennie going for one day and did some washing. Each wash takes over 40 liters of water. It was the first time we have filled out water tanks with river water. We have 3 tanks on the van. One is solely for drinking water the other 2 for washing. We have 2, 20 L drums solely for water. We filled them in the river then carried them to the van. Not an easy feat when it is all up hill on rough ground. I started to help but while I could fill the drums I couldn’t carry them so Adrian did most of the work.   We put 120 L into the van and I washed the bigger item, Sheets and towels. It is only a 3 Kg machine. Basically that is one sheet and 3 pairs of my underwear or 2 of Adrian’s. The poor caravan became a laundry with cloths scatted from top to bottom as I judged which item could go with which. Not over 3 Kg but not under either. There is an art to washing in a caravan.

I could have stayed at Wellington Dam for another week easy but we have places to see people to meet.