We stopped at Finke River bush camp beside the road. The River is said to be the once of the oldest rivers in the world and is the longest of the watercourse in Central Australia. It used to flow into Lake Eyre some 65 million years ago but stopped about 30 or 40 million years ago. After reading the information signs (which was the home of a local spider) I was impressed. We walked down to the river. Now you would be thinking there would be water a plenty. Nope. There was water but it depended where you stood to how much you saw.   Under the bridge dry as, turn the other way, you could almost believe there was a flowing river.   One of the caravaners told me that it would take a day all two for the water from the rain to flow through. Then went on to warn me never to camp in a dry creek bed as flash flooding happened more than people realize. I thanked him for the information. 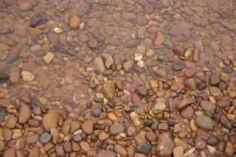 We stopped off at Stuarts Well Roadhouse to fuel up. Adrian was almost ready to have lunch when he saw the menu board.