On another night we went to the deckchair theater. We haven’t been to a movie since we have been on the road (not that we went often.) We thought we would treat ourselves. I packed a picnic dinner with some lovely cheese’s I pick up at a deli and some snacks. They had a bar, so we were good and didn’t smuggle in a bottle of wine. The deckchairs were very uncomfortable to sit in, (no back support) and the film was a weird one; about a man who’s girlfriend died in an avalanche and they had found her body after 40 years and how his wife didn’t like the emotions it brought up. Adrian and I left shaking our heads and decided the film was an “Art Film” as you don’t have to understand them. It was a lovely night out and I would do again (with a different film.) The theater itself was lovely and it was nice to watch the sunset and enjoy a dinner picnic. 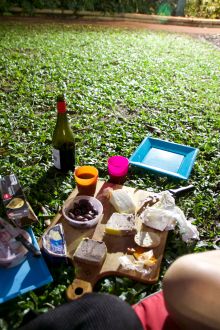