We stopped for lunch at the Tavern as it had 2 crocs in residence. A small one which was a fresh water croc, the second one was a salty and heaps bigger. We had to have a look. They just sat there and did nothing. We took the photos and watched for a while but noting. Boring. 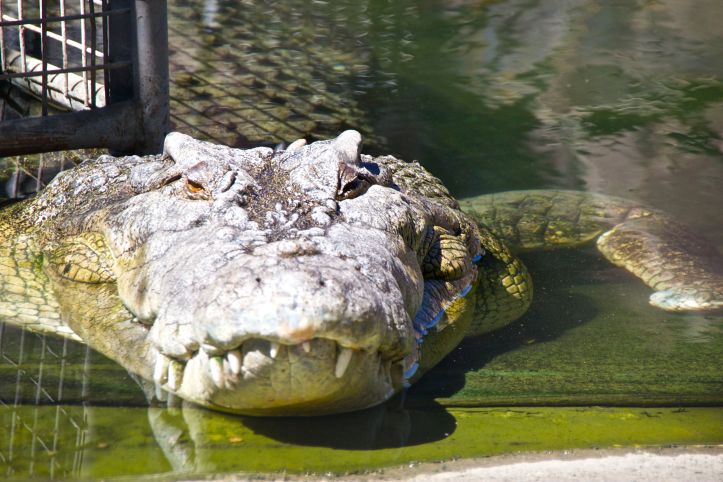 Ok lunch at the pub, $15 burger with the lot and chips, as well as a beer.

Just as we were thinking about getting back onto the road when a woman walked though the pub yelling that she was going to feed the crocs, when we heard that we couldn’t refuse. Maybe I would get some action shots after all. Along with a lot of other people we trundled out to watch. The smaller croc wasn’t interested at all and didn’t even move or blink with a frozen chicken was thrown over the fence. The second one, which we found out was named Brutus, was decently interested. He had hurled himself out of the water and was ready for lunch. The lady informed everyone that Brutus was about 60 years old. How did she know that, Brutus had to have a toe amputated about 10 years ago and crocs are like trees in they have growth rings. They counted Brutus’s rings on the toe bone and found out he was about 50. (He has been in residence at the pub for 10 years.) Crocs live to be about 80 to 90 (that is if they are not eaten by another croc when they are young.) An interesting thing with saltwater crocs is that they need fresh water every couple of months to flush the salt out of their system.

The lady asked everyone to stand back from the fence before throwing a chicken into the enclosure. It landed behind Brutus and in an instant he had swung around to try and find the bird. We were told that although crocs are fast they use a lot of energy and then have to sit and rest which is what Brutus did. After about 5 minute he found the frozen chicken and chomped him down. He was then given another one, which ended the same way. The pub changes the feeding time, what they give them and how much they feed the crocs trying to keep it more like how they would feed in the wild.

The woman gave a very interesting talk on the crocks most of which I have forgotten as I was more interested in Brutus. What I do remember is that salties are the supreme hunters of the wetlands. They are the biggest reptiles in the world. Salties reproduce in the wet season while freshies reproduce in the dry season. Female crocs can lay up to 70 eggs at a time. The temperature at which the eggs are kept at will determines the sex of the young. Now that I think of it I did pay more attention then I thought. Oh and crocs don’t have tongues.