We had been told about Corella Dam along the way. We pulled off the main road to be greeted with what looked like a locked gate. We don’t know why the gate is always kept closed but the universal rule is ‘if you go through a closed gate make sure you close it after you. If it open leave it open.’

The road was a little rough but not as bad as some we have been on. Umbrawarra Gorge came to mind. We pulled into a little cove with about 30 vans parked along the waters edge. As in most bush camps we had a look around before setting up camp. We had decided to stay where we were when we walked up over a small hill and on the other side to discovered a touch of paradise. There was another little cove with a grassed flat camping area. Our van was quickly retrieved and relocated. We backed the van up to be almost in the water. 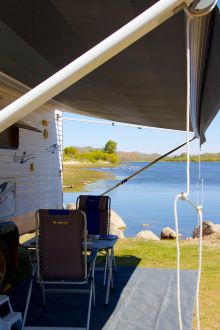 There were 5 vans along the water and several more further back. The vans on the waters edge became a little community. We had happy hour every night. Macca (he was in the van behind us) told Adrian the best place to put his nets in for red claw. They discussed the best bait to use as Macca had been there for 2 weeks and was pulling in over a hundred red claw a day. He sorted them into different sizes. Freezing some, pickling some and give the small ones he didn’t want to us. We didn’t say no. I pickled small amounts in different vinegars with the first amount he gave us. I had a bottle of Sherry vinegar and a bottle of Apple cider vinegar along with some plain. (I don’t know how I ended up with some many different types.) The one I liked best was pickled onions juice, (the liquid that is left after you eat all the onions.) The vinegars were a little strong in vinegar flavor and Macca suggested the picked onion juice. We cooked the red claw, peeled them then put them in the onion juice. The hard part was waiting until the next day to taste them. So nice.

It wasn’t long before Adrian was bringing in his own red claw. The second night we had enough big ones to cook them for a feed. We blanched them, peeled them fried them in a little butter and garlic. I had a little bit of sour cream left over so throw that in as well. Mmmm yummy.

That became our way of life for a week. Adrian going out in the canoe to check the nets for red claw in the morning. Adrian cleaning them, me blanching them peeling them and pickling them or freezing them. We only had 3 nets and having only the canoe our nets were set close so we were only bring in about 50 at a time. Not that we were complaining. It is a lot of work for the 50. 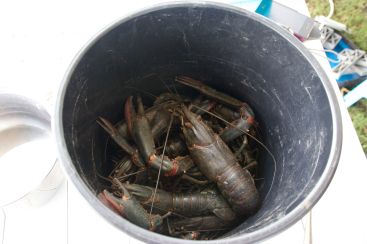 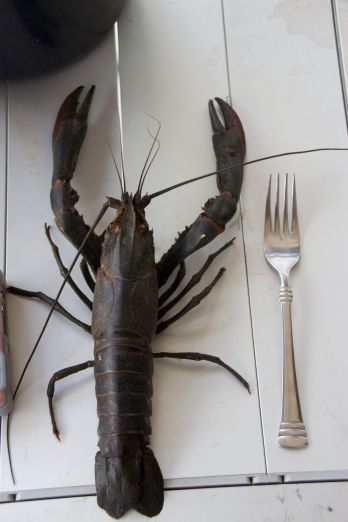 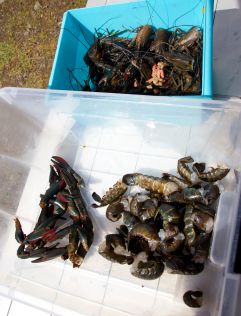 Macca had a fire set up every night and we would all gather around it. (I think he was a bit of a pyromaniac.) It is nice to sit back at the end of the day to talk and laugh, the topics varied greatly. One night Macca talked about the plight of the dairy farmer. He had been a dairy farmer but sold up. He couldn’t make any money as his farm was too small. He told us you either go big or became a boutique farm, specializing in something. He didn’t have the money for either so got out. He told us he was getting 26 cents per litre now it is down to 14 cents. Even the 26 cents doesn’t seem like a lot.

At the happy hour we also discovered cane toad bashing. What is cane toad bashing? It is where you grab a shovel or bat and you chase down cane toads. They are not native to Australia and are deadly to the local wild life. One less toad is a good thing. I didn’t join in but Adrian had a go. The best night was 5 toads, most nights it was nothing.

We took a drive to Marry Kathleen. The original town was settled in the 1860s but it wasn’t until 1954 that Uranium was discovered. The uranium was mined from 1958 to 1963 then again in 1974 to 1982 when the uranium finally ran out. In its life the mine produced over 31 million tonnes of ore. Now only the scars on the landscape remain. The buildings from the mine and town were sold and removed. Where the town used to be is now a bush camp and there were several vans and busses parked up. We walked around the road that was the town and looked at the concrete slabs that are left of the buildings and tried to picture Marry Kathleen in is heyday. The town was consisted to be very modern for its time with everything you would want in a town. (In 1957 they started to pump water from Corella Dam.) 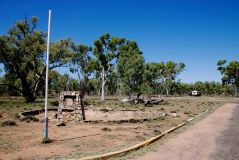 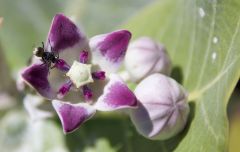 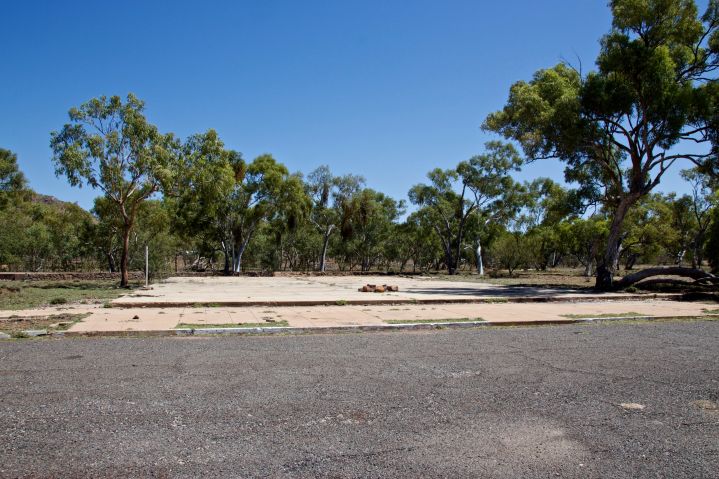 We had been told we could dump our black water at a place at a place at the top of the hill. The spot was another bush camp. Only one van had decided to make the journey up the steep hill yet they were not alone. A quick trip to the facilities showed a family of green frogs. While they looked cute it is not something ladies like to see just as they are about to sit down. It surprised me how big the frogs were and I am sure they were looking at me.

On one of the nights we were sitting having happy hour when I looked over to the water to see a bird taking a bath. We all watched nature at play; luckily I had my camera with me. 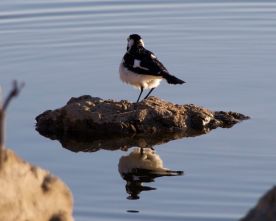 We would see the bird fly in to roost in the evening. It was an interesting sight. Sometime they would just fly to the trees and settle. Other time they would fly around and around before settling.

We took a walk to the top of the hill. It wasn’t an official lookout; we followed the path walked by many before us. The spot gave you a good look at the dam. It was a lot bigger than I first though. Amazing view.

One of the vanners pulled out his guitar and amp one night. He started to play and we all gathered around to listen. The music didn’t last long as his amp battery died.   While I enjoyed the evening I was pleased it came to an end early. He wasn’t that good. In saying that I will admit he was better than I could do.

Macca finally left the dam after 3 weeks. We had a new person arrive to take his place. Straight away he pulled out his fishing rod. First time he threw a cast he caught a turtle. He wife ran over to let the poor thing off the hook and let it go back in the water. The husband threw the line out again. Again within a minute he had caught another turtle. He wife again let the poor thing off. He through the line out a third time and the same thing happened again. His wife told him off and told him he was not fishing of the shore again. I had to agree with her. 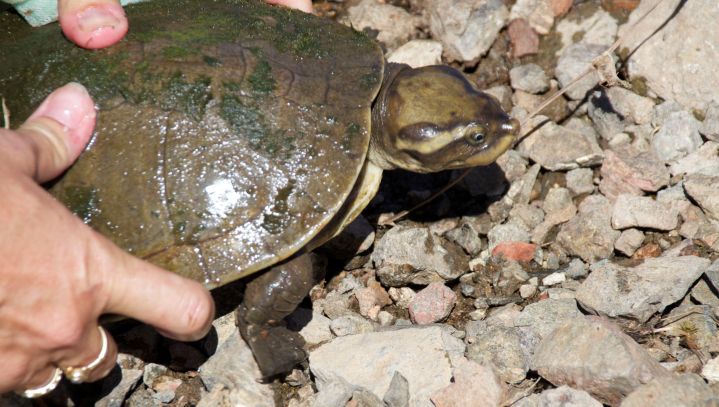 We all got together around the big campfire without Macca. Adrian and I were toying with the idea of staying longer. We had decided to move on but one of the other vanners who had arrived just for the weekend had given us their water before they left. This meant we could stay longer if we wanted to. Adrian sat next to the new couple (the turtle people) and the woman started to talk and talk and talk. Yes I did smile when I thought it could have been me. At seven I made a point of getting up and telling everyone I had to go cook dinner so would have to leave the group. Most of the other people took my queue and happy hour broke up. Adrian followed me into the van and the first thing out of his mouth was “we are going tomorrow.” I laughed and agreed. The next morning we said goodbye to our neighbours on the other side and laugh about how much this woman had talked. She didn’t seem to have an ‘off’ button. Her husband seemed very quiet, I don’t know if it was because he couldn’t get a word in or she was using all her words she had saved up on us. She did seem nice but only in small doses. 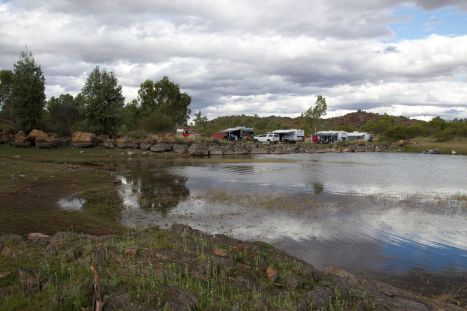 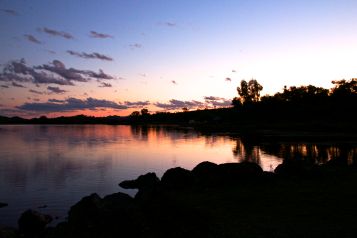