We took a drive to Kuranda. It is a town of markets. You could be in Bali with the small shops scattered about.  We wandered in and out for most of the morning. 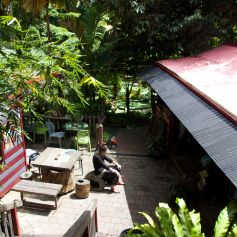 The town boasts of a C47 with the name “Geronimo.” The plane was built in the late 1942 in America, arriving in Australia a year later with the USA 5th Air Force. It served at Mareeba and Brisbane and was handed over to the Commonwealth Government by the US forces. Some time after 1945 the government handed it over to TAA (Trans Australian Airways) where it was used as a passenger plane until 1956. It was then handed over to East West Airlines and ended it’s service in 1976. Geronimo’s last flight was in 1981.

In 1983 a film crew repainted the plane and renamed it ‘Miss Fortune.’ Miss Fortune played a part in the film ‘Sky Pirates,’ her role had her crashing on the Barrier Reef. After filming she was going to end up on a scrapheap. The Heritage Homestead asked to buy a wing or nose as Geronimo was now in about 50 pieces. Mr Vic Tonkin (who owns the scrapyard) kindly donated Geronimo to the Heritage Markets where she now rests.  Something different.

Geronimo isn’t the only interesting item to spark your interest. A dinosaur greeted you at a gem shop and we saw our first Cassowary. Ok it was only a statue but now I know what to look for when we hit Mission Beach and how big they are. Total surprise. I though the emu was the only big bird we have. Still learning about my own country. 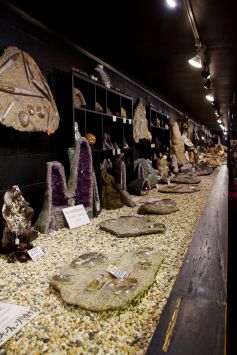 From Kuranda we caught the scenic train down to Cairns. The train line was started in 1887. For it’s time it was one of the most ambitious project ever undertaken. Now an old fashioned train with old fashioned carriages will take you on a lovely ride down the mountain. Kuranda station has been heritage listed although it is quite new, in 1915 gas lighting was installed so you see it is very modern. 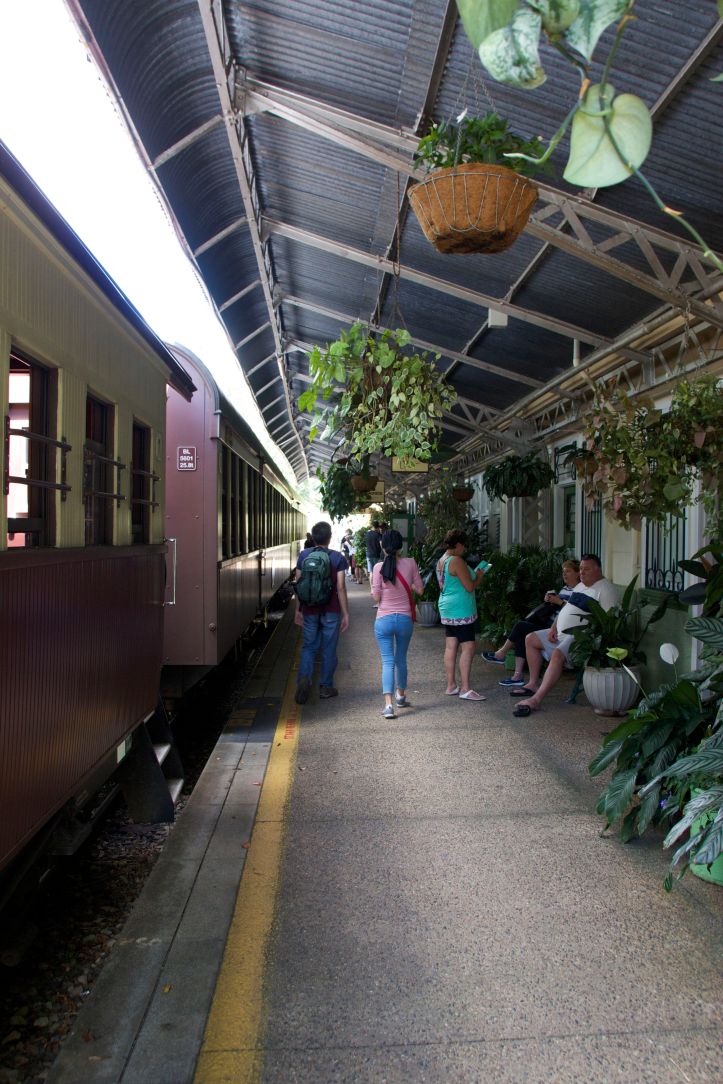 We stopped at Barron Falls to view the waterfall. The fall has a drop of 265 meters. A ‘Flying fox’ was used in early days to transfer supplies and livestock as well as people across the river. 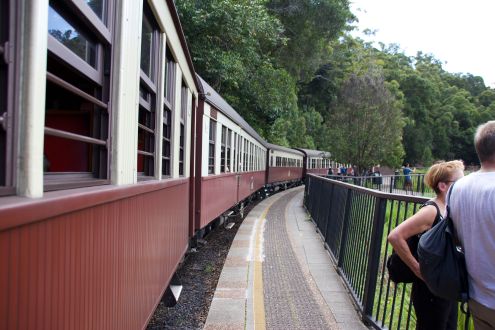 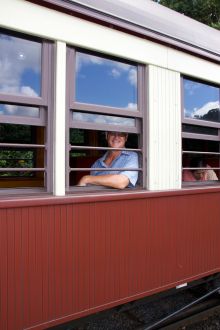 A bridge was erected in 1890 so the train could cross Stoney Creek Falls. It stands on three trestle piers with a tight 4 chain radius. (I am not really sure what that really means, I read it in the magazine, I guess in is a long winded way of saying it is a tight corner.) When the bridge was finished the Governor Sir Henry Normand and dignitaries had lunch on it. That is not the only bend; there is a horseshoe bend of 180 degree with a 5 chain radius further down the line.

Like all good train journeys you have to have at least one tunnel. The first plan was to have 15 but 4 were changed to cut outs. In 1973 some masked bandits held up a railmotor which was transferring wages to businesses on the tablelands at tunnel 6. They escaped on trail bikes and have never been seen again. Tunnel 15 boast of being the longest tunnel (490metres) of the Kuranda Range. It has three curves and eleven safety culverts built to prevent anyone being trapped by an oncoming train. Sadly when it was being built it collapsed killing 7 men. We had a commentary as we traveled. She kindly pointed that bit of information out to us as we entered the tunnel. Good timing. Not. 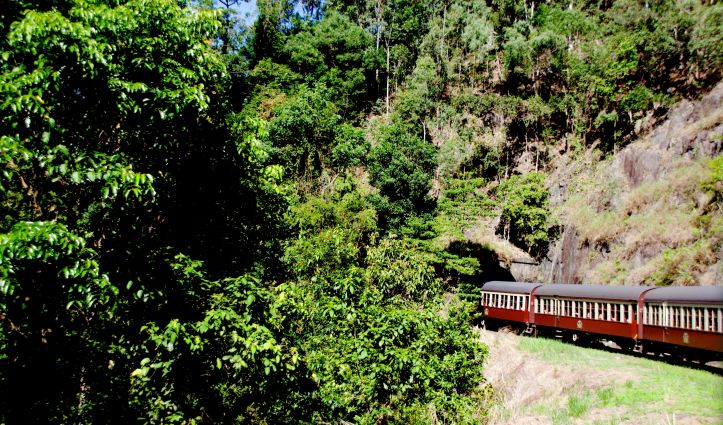 The scenery was spectacular.

From the train stop we took a small bus ride to the sky rail. This is where Adrian and I parted company. I handed him my camera and I let he right it alone. Anything to do with hights is not my thing. (The train trip down was enough for me.) I was impressed with the photos. It almost made me regret not going up with him, but only for a brief second. 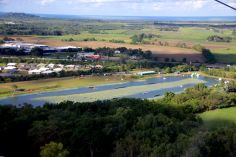