We arrived at Burren Junction Artesian Bore Spa Baths camp mid afternoon. Like the hot spring in Lightning Ridge, the Burren Spa Bath has the repetition of curing all things. It isn’t a large site and I could see it getting packed out at the height of the season. We have been lucky in our travels, as we seem to be traveling just at the start of the ‘off season’ no matter where we go the weather has been good without the crowds.

There were only 5 vans already on the site so it was easy to pull into a spot. Once we had set up, Adrian was keen to get back into the hot spring so off we strolled. I tried no to laugh at the sign on the front gate of the pool. Although the gates were open the pool itself was closed.   We walked in to have a look around and to feel the water. The pool had been closed for only 2 day and the water was already cold. So why were the gate still open? They stay open to let anyone staying in the bush camp, to have access to the showers. When the pool is open the shower would be hot so a real bonus for the bush camp. With the pool being closed the showers were cold as none of the hot spring water was being pumped though the system.

We had planned to stay for two nights; with the pool being closed we reevaluated whether to stay for both nights. The decision was up to Adrian as he was the one in pain.

We chose to stay for the two nights. We started to talk to the people in the van next to us. They were from Newcastle.   We swopped some books and through the course of the conversation Bob mentioned he had a bad back as well. He traveled to Maitland to see a chiropractor. He was happy to give us her name.   Great, that was one problem solved, ‘trying to find a good chiropractor.’ It is always good to go with a recommendation.

Bob was having problems with his GPS system. It wouldn’t talk to him. It is the same one as we have so Adrian had a quick look at it and got it talking. Later in the day the caretaker in the van on the other side of us noticed we had a dash cam (not that we really use it.) He had a different one and was having problems with it so asked Adrian if he could have a look at it for him. Adrian got the caretaker’s dash cam working as well. I teased Adrian about his new business, ‘IT expert’.   For some reason Adrian didn’t seem to think it was as funny as I did.

The bush camp had a lovely feel to the place. Very relaxing. I took a walk around the pool area. The caretaker had planted some bottlebrush plants. They were full of butterflies. They added something extra to the site. 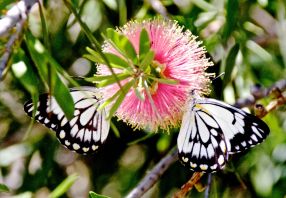 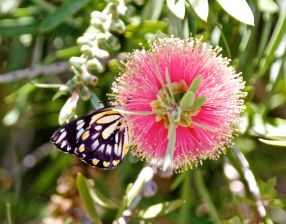