It was defiantly harvest time for the area. There were lots of trucks on the road, all fully loaded with the different grains. They aren’t the little everyday truck, no, these ones are the big road trains. It does make it intimidating to drive with them. Here I am only driving at 80 to 90 and they are overtaking me at the first chance they get. Which isn’t often because of the windy roads. More than once I had to slow down to give the truck more room to pull in front of me. I tried to pull over once and got abused for my troubles.   It seemed I didn’t give the truck driver enough warning. Flickers on, slow down, pull over. (We have a two way radio so hear the feedback. Their language was enough to make a sailor blush.) If I didn’t give him enough warning I am really happy I didn’t have to brake quickly or I would have been a hood ornament.

We pulled into the Narrabri Show grounds for a night. We were a little unsure where to go and what to do.  There is a caretaker’s house at the entrance of the grounds. A sign told us to place the money into an envelope and drop it into the box supplied but no real direction for what to do next so we had to play it by ear.

Like most showground Narrabri is a mish-mash of building and different areas. We spotted a van off in the distance and made a beeline to it. There were several vans already in residence and all spread out as is often the way.  The longer you have been on the road for, the more inclined you are to want space between you and another van. If you are new to vanning then you are more inclined to park close to someone else. We chose our spot not too close to the next van but not on our own either and set up camp. It we are only staying for one night we often don’t unhitch the van. Adrian and I talked about looking round the town. Having a look round won out and we unhitched and went for a drive. As Adrian still can’t walk too far with his back it was a bit of waste of time. Maybe next time. 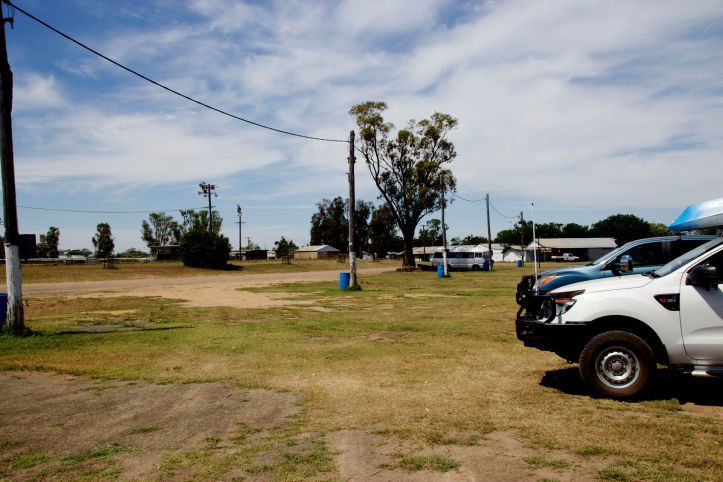 We drove though Gunnedah (the koala capital of Australia) and stopped long enough the see the mining statue, stretch our legs and move on. I was very disappointed with Gunnedah. I didn’t get to see one Koala walking down the main street.