The wedding was to be held at Wincham Hall Country Hotel. The hotel offers accommodation for wedding guests with 10 rooms.   Most of the family had been booked into the hotel overnight. We had thought we would have missed getting a room as we had confirmed so late but luck would have it there was one room left.The hall was about 40 minutes drive from where we were staying (we kept our room at the other hotel as well so only took what we needed.) As we had a car we gave a lift to Adrian’s second daughter and her partner and headed off just before lunch.

As we drove into the driveway of the hall we were greeted with a long drive. Green vines made their way up the trees. To me it was a romantic scene that put a smile on my face. Coming from the second driest country in the world rolling green fields and in this case driveways are always nice. 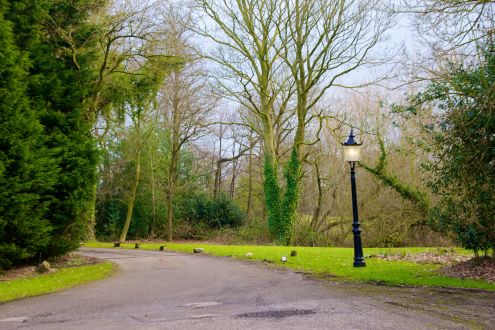 The hall as the name would suggest looked like an old manor house converted. What looked like it used to be a coach house had been turned into the chapel. It wasn’t a real chapel as the building is non denominational. I can’t remember what they actually called it but you get the idea.

We booked in and made our way to the room. The instructions were, “Go up the stairs. When you get to the dog’s leg, go right.” Ok, sounds interesting. At the top of the stairs was a wall. A passage was off to the left and on the right it looked like a dead end. Another look there was a little way on a turning to continue on. Ok that bit was easy. The room was small. I went to take a photo of the it but any which way I stood, it just didn’t fit behind the lens. So I stood on one side of the bed and took a photo of the window. 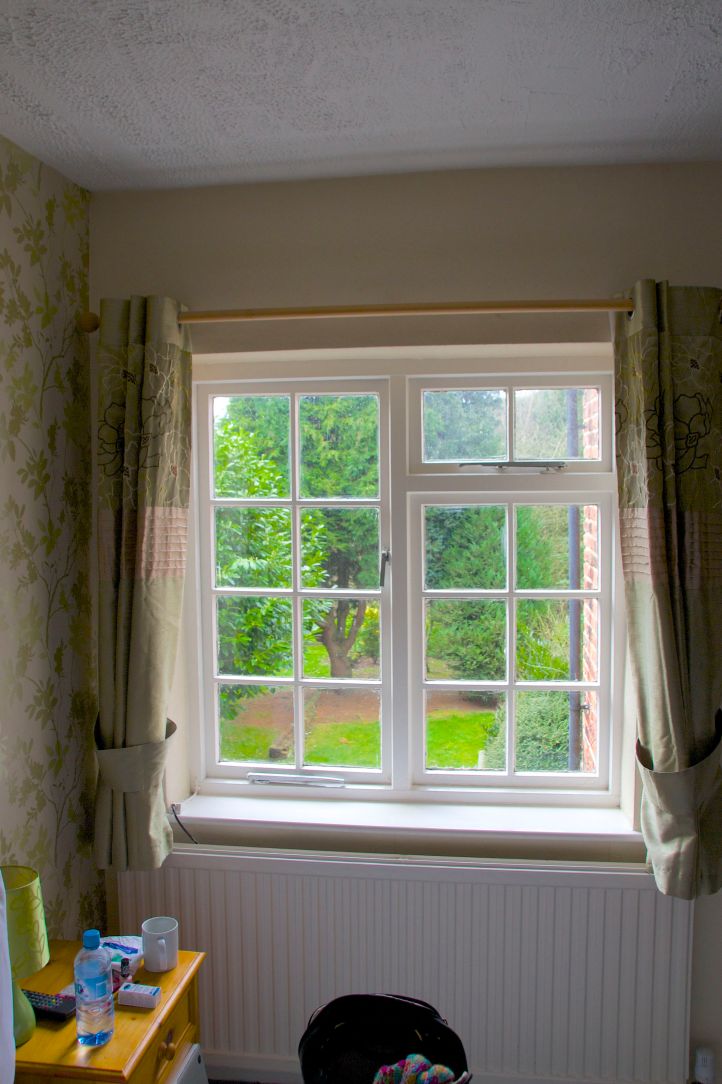 We had plenty of time to get ready, as the wedding didn’t start until 3. Adrian jumped into the shower first as I ironed his shirt. We were both dressed and just finishing up the extra like makeup and jewelry (ok that bit was for me) when we had a knock on the door. Adrian had been told not to buy a tie, as all the men in the immediate family would be wearing the same colour ties. Nice touch. The knock on the door was the delivery of one such tie. About ten minutes later there was another knock on the door. This time it was the delivery of two home made paper flowers to be worn by each immediate family member. Adrian and I debated which way to wear them. Stem up or down and is it different for men to women? I always thought it was, with men wearing the flower so it pointed up and women with the flower pointing down but Adrian didn’t think so. Adrian had his up and I put my down. I was going to have a look at the other mothers and make a change if I had to change but I forgot.

Adrian was called away to Emily’s room, as both parents would be walking the brides down the isle. I wondered down to the bar area as everyone else was having a drink before the wedding started. After about half an hour we were all led into the chapel. It wasn’t long before the music changed and the first bride with her parents one on each side started the long walk down the isle. Then came Emily and her parents. Both brides had smiles from ear to ear and so did all the parents. I though it a lovely idea to have both parents with each bride. Traditional but not traditional.

The wedding didn’t take long at all then it was outside for everyone for the group photos. That is always fun. People standing around waiting or being confused. “Where do you want me to stand again?” and of course hold this.” Adrian seemed to be the holder for everything. I guess because Emily handed over her bouquet and everyone else just followed. 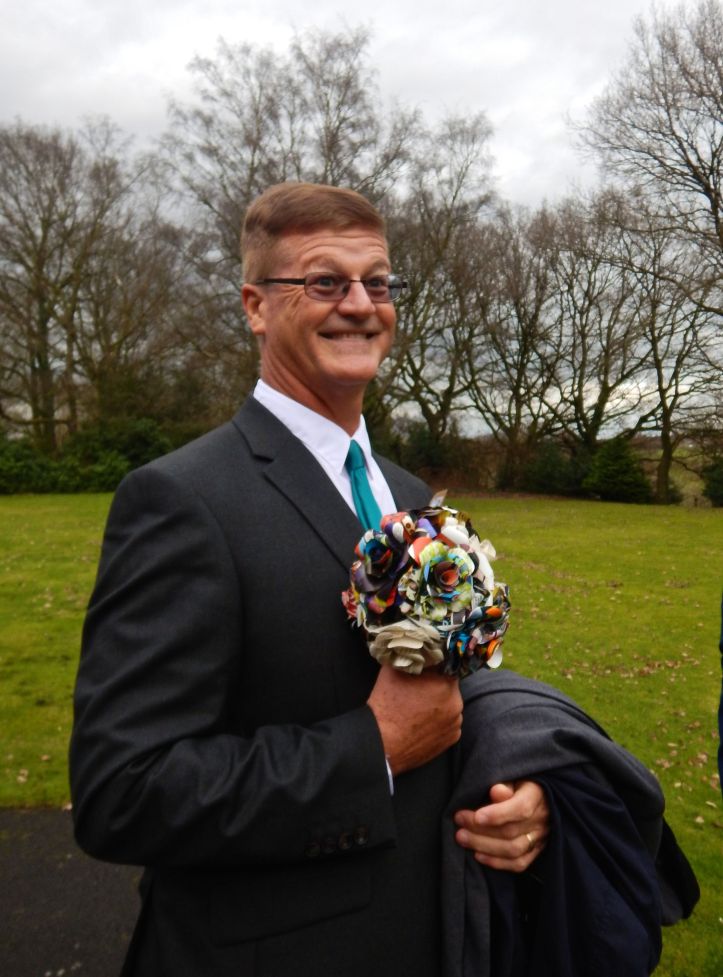 We went back in for more drinks and to chat while the romantic photos were taken of the happy couple. You know the ones with the couple looking lovingly into each other eyes.

There were only about 40 at the wedding so we got to mingle with most people. Then it was dinnertime. We hadn’t had lunch so I was starving. It was a very English dinner, soup to start with then roast beef and yorkshire pudding and a dessert to finish up with.

When everyone was full the speeches came with tears. When my step daughter started her speech she did warn everyone she would cry and she did. She only had about two words out of her mouth with the tears started as she thanking her father for coming and all his support over the years then she moved on to thanking her mother for being the best mum in the world. What is it about a wedding being one of the most happiest day of anyone’s life and yet we seem to shed so many tears. The speeches nearly brought a tear to my eye as well. Love weddings.

After the speeches the wedding cake was cut. Emily had made and decorated the cake. We had going over to her place the day she had baked it. Not that we helped. We were just there to give her support. We had seen it in its raw state so I was blown away with how it looked for the big day. Well done Emily.

After the cake cutting we were unshed back into the bar area while the staff reset the room with the tables to the walls leaving the middle for dancing. It was at this point where more people started to arrive. They were friends of the brides who were not invited to the wedding breakfast. It seems to be a common thing now in England for friends to join the happy couple to celebrate after the wedding breakfast.   What a great idea. Weddings are so expensive now days, you want all your friends to come for the big day but sometime the budget just doesn’t allow it. What a great way to cut cost and get what you want at the same time.

It was about 9 o’clock when supper came out. This was very different. There were cooked sausage butties and bacon butties (a butty is a bread roll to all Aussies.) The cake had been cut and was on offer as well. I had to try the cake. Very nice.

It wasn’t long after supper I decided to call it a night, as I wasn’t feeling the best. Adrian stayed until the end, which was midnight so I didn’t skip out too early. Adrian tried to sneak in but I was still awake. We talked for a little and when he slipped into bed I laughed. The bed was like sleeping on rocks. Hard and lumpy: maybe they were still the original beds from when the manor was built. We were in for a long nigh.

The next morning it was hard getting out of bed. I am sure my old bones were refusing to work in protest of such a hard nigh. We eventually make it down to breakfast to meet everyone. It was a full English breakfast on offer. The waitress tried offering black pudding to everyone but for some reason not one Aussie took up the offer. Funny that.

As we were leaving I noticed the hotel offers “Ghost Hunt Dinners.” The Hotel boasts of being one of the top places in England if you would like to see a ghost. It seems a Knight has been seen on the grounds and a small child has been seen running though walls. They don’t guarantee you will see a ghost hence the dinner and then you get to walk around the hotel looking for one. If I had only known I would have been out there with my torch, looking.