We had booked into a Bed and Breakfast for the night. We were given a warm welcome from the owner. He sat us down with a cupper and a slice of carrot cake he had just made. While we were eating it he gave us a run down on what was best to see in the town.   After about an hour we apologised for taking up so much of his time, he laughed and said we were only keeping him from ironing the sheets. This made me smile. Is it only in England people still iron sheets?

The room was lovely, a little on the small side but I think some of the rooms had been taken up with the addition of the ensuites. I walked into the bathroom to find a William Shakespeare rubber duck sitting on the windowsill. What a quaker of a nice touch.

Adrian decided to go get fish and chips for dinner as I was coming down with a cold. The idea was for me to go to bed and we would sit back in bed eating dinner and watching some TV in the warmth of the room.   I was in bed when Adrian popped his head around the door and told me the own (Peter) had seen him come back and had set the table for us to have dinner in the breakfast room. So I got out of my warm bed and got dressed back in my clothes and made it down stairs. Peter had a smile on his face telling us if we needed anything, just call. How could I be cross with him? He was going out of his way to fuss over us. So Sweet. After I did think it was a better idea as I am sure eating fish and chips in the room would have left the room smelling of fish for days.

After a lovely breakfast (yes Peter did offer us black pudding and no we didn’t take him up on the offer) we were on our way. Not out of town but into town to see the house where William grew up in.

Being on holiday and not thinking about it being a Sunday we made out way into the centre of Stratford early only to discover the museum was closed until 10am. (The front of the house has been sealed off to protect it.) 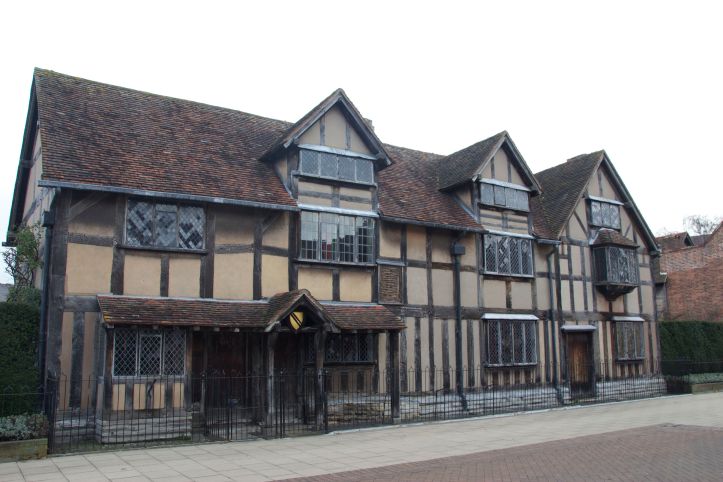 It was only 9am and to make matters worse none of the shops were open either.   We had an hour to walk the streets. To start with I thought ‘damm’ but then it was nice to have a pleasant walk window shopping at all the old shops.

We made it back to the museum by 5 past the hour and were surprised with how many people we lining up to go inside. It didn’t take long to pass thought into the start of the museum.

One of the first items I saw as I entered was a list of quotes we may use that has all been credited to William. It is a long list as he wrote 37 plays, 154 sonnets and 5 titled poems. He gave us nearly a million word of text. Amazing, I don’t know all of them but I did know most of the quotes. Yes it surprised me how often we use William Shakespeare’s words. The idea I am quoting William Shakespeare did make me feel very smart. 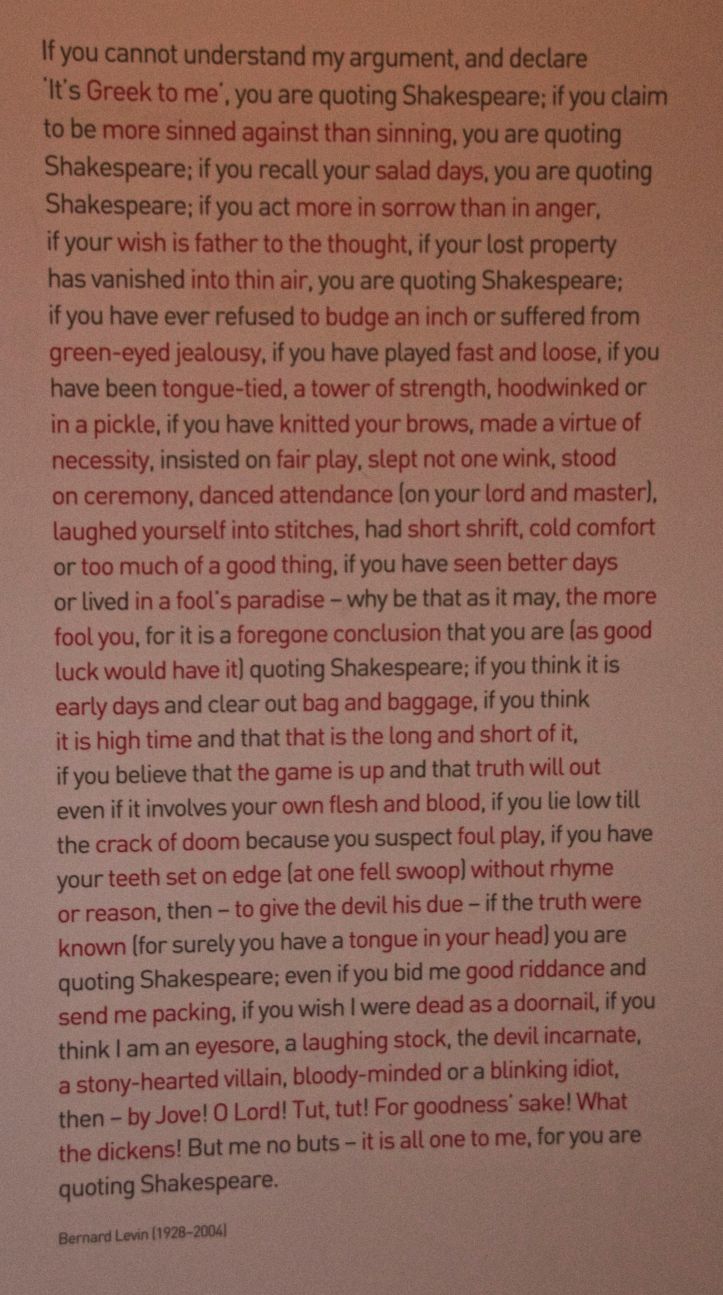 There was sooooo much to read on William’s life. The interesting thing is that some of it contradicts the information we had read at Ann’s house. At William’s birth house it says Ann’s father left her land but at Ann’s house she was left only money.  What I learnt was there is no birth records for William. His baptism was recorded at the Holy Trinity Church in Stratford-upon-Avon for April 26, 1564. It is thought he was born between 3 to 6 days before, as it was custom to have babies baptized as soon as possible. At the time of his birth ‘the plague’ had hit the town. William was the third born of 6 children, the first one to survive and the oldest male.

There seem to be very little known about William’s schooling which has lead to some people questioning if William really wrote everything he has been given credit for. For me, it doesn’t matter. Let’s just all enjoy the work that is known as ‘the works of William Shakespeare’

William married Anne on 28th November 1582. They had 3 children, Susanna and two years latter twins Hamnet and Judith. Sadly Hamnet later died of unknown causes when he was just 11 (it has been suggested from the plague.) It has been said William was fascinated by twins and it is one of the reasons he wrote several place involving twins.

By 1592 it is on record William was earning a living as an actor and playwright in London. An article in a Guild London paper is said to have taken a few jabs at William around this time by printing “There is an upstart Crow, beautified with our feathers, that with his Tiger’s heart wrapped in a player’s hide supposes he is as well able to bombast out a blank verse as the best of you.” He must of done something right as just seven years later he had earned enough money to going into a partnership to build the ‘Globe’ and in another 6 years he purchased a lease for real estate in Stratford for £440. The property quickly doubled in value and William earned about £60 a year in income. Some would say this income gave William the freedom to write his plays on a full time basis. By 1592 he had moved back to Stratford purchasing one of the largest houses in the centre of town. (The house cost about £120.)

As his birth was not recorded nor was his death. Church records show he was interred at Trinity Church on 25th April 1616.

In his will he left the bulk of his estate to his eldest daughter Susanna. It seem the second daughter, (Judith’s) husband was a naughty boy and got another woman pregnant. William left Judith £300 in her own name leaving the husband out of the will. Anne was entitled to a third of the estate but was left very little except for the ‘second best bed’ there is some debate about the reasoning for this but in their time beds were for the rich and the best bed was always kept for guests and the second best bed would have been the marital bed so if you take a step back to look at what William did, it is kind of romantic.

We left the main building and took a short walk though a small garden area then into the house where William’s life began. Where he and his brothers and sisters played as children. The same place he brought his bride to and where his children were born. (He later inherited the house from his father.)

Again the house was set up, as it would have looked like when William was alive. William’s Father’s business was glove making, wool dealing and moneylending. He also acted in a civic role rising to become a Bailiff, which is very similar to a Mayor. A staff member of the museum, dressed in period costume was in the workshop and spoke about making gloves and William’s father. It seems he was a bit shady in some of his business dealings. Along with being a glove maker he was also a ‘whittawer,’ which meant he made his own leather basically from any animal he could get his hands on. The skins were tanned in a pit in the back garden. We were told the smell would have been horrendous. Three boxes were set up off to the side and if you took a sniff you got an idea on how bad the smell was. I didn’t give it a go but Adrian was braver. I wished I had filmed Adrian, as the face he pulled was priceless. 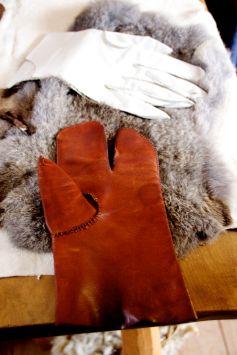 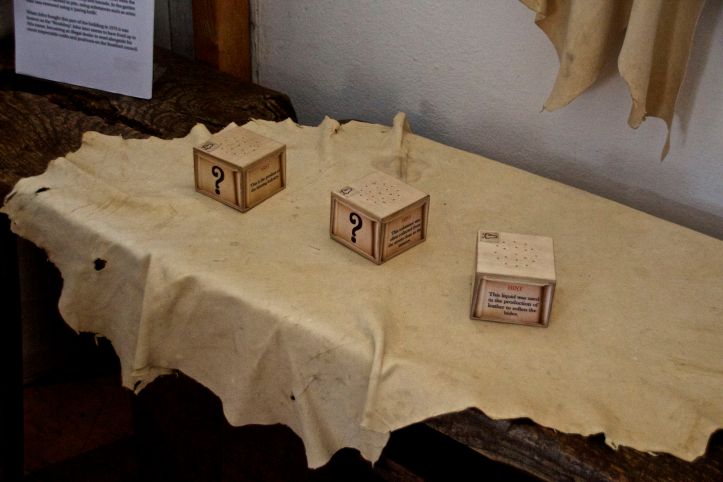 We left that room and walked into a large passageway. It seem they would bring the horse and laden wagon right into the house and out the back. Nice.

We continued on going up stairs to the bedrooms before going down into a kitchen area.

From the kitchen we made our way into the ‘Drinking Parlour.’ The ‘Drinking Parlor,’ seemed to be an inn. In Tudor times drinking ale was safer than drinking water. Shakespeare’s father previously acted as an ‘ale taster’ for the town hence the parlor. An interesting side note: If you were arrested for drunken behavior your punishment would most likely have been to wear a ‘drunkard’s’ cloak (which was a hollowed out beer barrel) around town. I like this bit. Maybe we should being this idea back.