I enjoyed the day at Stratford. I had been there once before on a bus tour for a day when I was in my late 20s but didn’t see anything connected with William Shakespear. I do remember the local pub though and sitting outside in the sunshine. I also remember there was a young man with radiant blue eyes. Don’t know why I didn’t go see anything about William.

Our next stop was at Warwick. We had informed the owner of the B&B we would be there about 6 but we made good time and arrived an hour early. No one was in the house so we rang the owner. He told us he was playing golf and wouldn’t be back until latter but if we look behind the big flowerpot we would find our key. We had the pick of two rooms. The first one was a double room close to the road. The second was a family room further back in the house. Which one should we choose? To help make a decision, we laid down on the beds. The softest bed won, which was the double room. The bed at Stratford had been a hard bed, not as hard as the lumpy bed at the one at the wedding but still hard.   (I guess we are just getting a little soft in our old age.)

When the owner came and checked on us to make sure everything was ok. Adrian asked where the best place to go for dinner was. He suggested a nice pub not far up the road only about a 10 minutes walk. I was happy to take the car but as it was just down the road a bit we set off walking. We had walked for about 15 minute (yes I was keeping an eye on the clock,) and still no sign of a pub. I was not in the best of moods. My nose was running and my body ached. I was already to tell Adrian to continue on and get some something for me when we saw a Chinese takeaway. Saved. This time we sat in our room to eat. The room was set up with a little kitchenette so we had plates. Bonus.

As I was feeling really bad Adrian and I talked about staying for another night. When we inquired at breakfast the next morning we were told the B&B was fully booked for the next week. Damm. The owner must of felt sorry for me because he gave me some cold and flu tablets to take. Nice. (Yes he did offer Black pudding and yes we said no.)

We were at Warwick to see the castle so off we went. We had been told not to park out the front of the castle, as it would cost about £30 for the day. It was better to go round the back, as it was easier to get a park and the parking was free. It was a bit of a walk but free parking and I’m happy.

As we enter the tradesman entrance I pulled out my camera and ………. No No NOOOOOOOO. My battery we flat. I could not believe it. So unfair. (Even if it was my fault.)

Only one thing to do. Out came the phone. 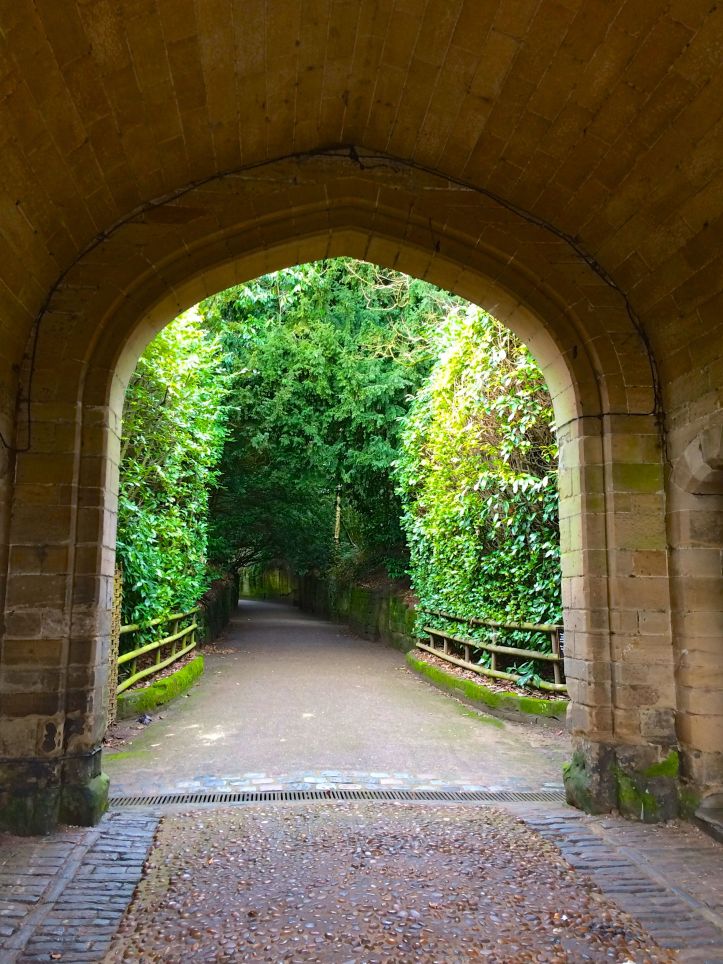 While we were waiting to buy our tickets some actors in period dress started to talk to the people in line. The man was dressed as a Knight; he started talking about sword fights and sieges. The children loved it.

As we walked to the castle another actor was giving a demonstration of archery out the front. He explained what an archer in the Kings army would go through.   We would have stayed to listen to more because it did see interesting but unfortunately he didn’t have a mic and his voice didn’t really carry to everyone. 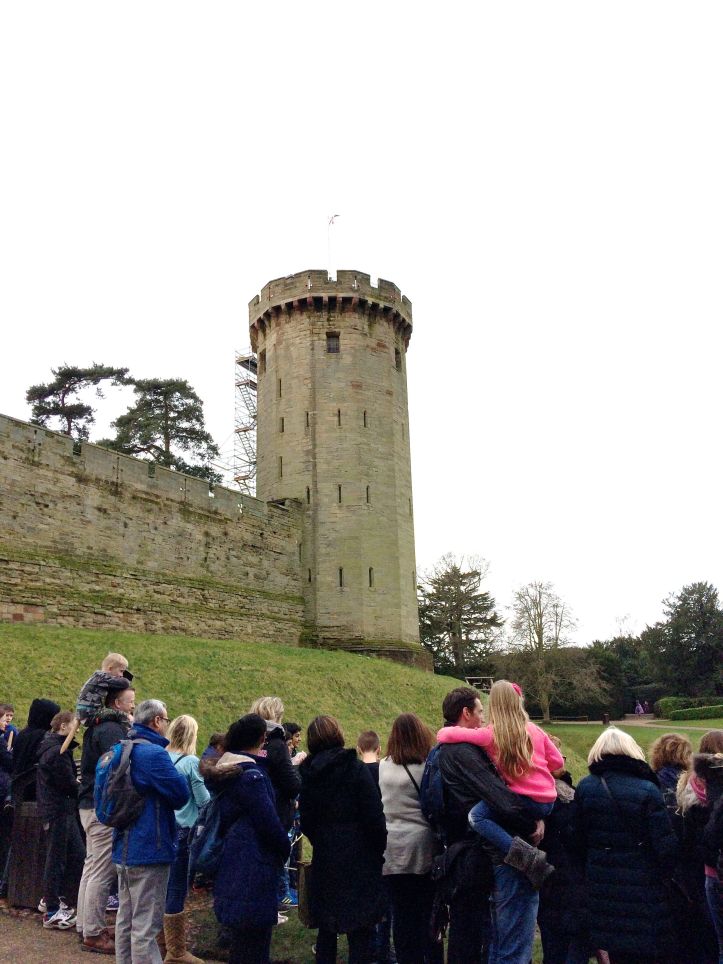 We left him and walked through the drawbridge. The castle looked big from outside but I was amazed with how large the inside area was. 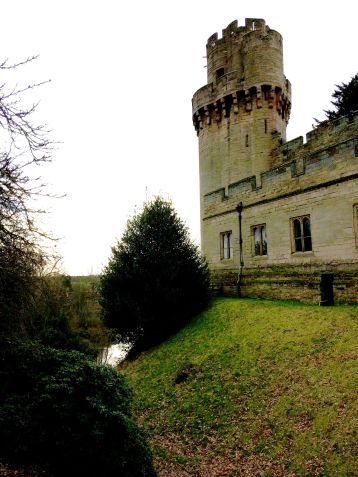 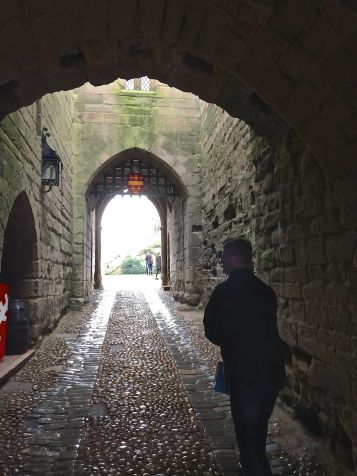 The life of the castle started about the 914 by Ethefleda, the daughter of Alfred the Great and around 1068 William the Conqueror rebuilt it. (That name I recognized from school.) It was settled by the ‘Templar Knights’ in the 1100s. By 1192 Warwick was given its first jousting licence. Good to know. The castle has passed though so many different hands in its life. Sometimes it was lost though a siege and other times it was received though inheriting it or by marriage. The walls even hold the stories of more than one murder. It was first opened to the paying public in 1815 as the then owner George, 2nd Earl of Warwick was declared bankrupt.   The castle was sold to The Tussauds Group in 1979 for £1.5 million. It has been estimated the Tussauds Group has spent over £26 million to restore it to its present day glory.

I was blown away when we walked in to the main room. I didn’t see a sign giving the room a name so I guess it might have once been the throne room. It was large and filled with armor. The 4th Earl of Warwick George Greville (1818 -1894) started the collection. Some of the rare pieces date as far back as 1520 and a cavalry commander in the cuirassiers wore certain pieces of the armor. Most have been worn largely for festivals and tournaments rather than battles. It wasn’t only the men who dress for the festivals, on display is a set of armor for a six year old boy dating back to 1620. (Can you say cute for a set of armor?) 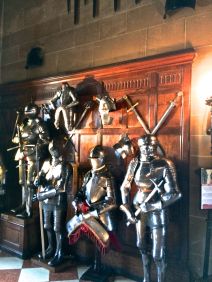 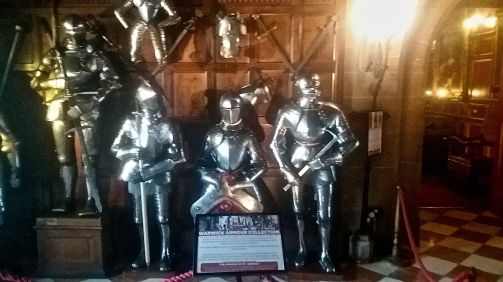 The weapons the army used were displayed on the wall across from the armor. There was even a gun. The information board tells everyone it is a “ridiculously large gun.” Yep I would agree with that. It would have stood taller than me. The gun was used by the French navy in the late 1700s. The British Navy captured it in 1781 during the American War of Independence. I don’t know about you but I was impressed with that. 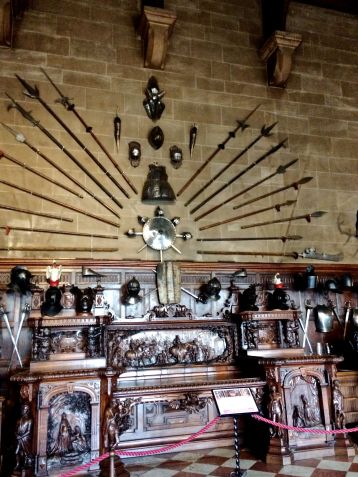 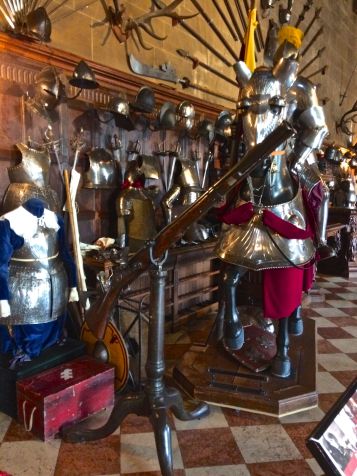 I loved the buffet. It was carved out of a single oak tree and took 9 years to complete. I love old wood furniture. No wonder it took 9 year to complete, it is a truly amazing piece of furniture. There is just so much work to it. Another piece of English furniture I would have loved to put in my suitcase to take home. 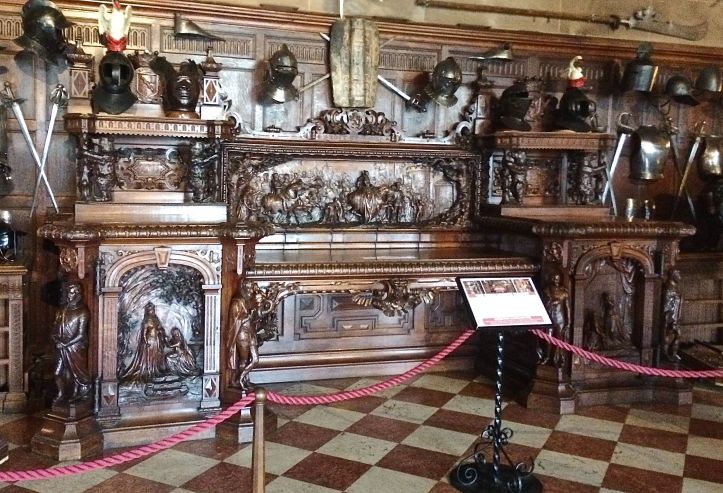 From the throne room we made our way thought one decadent room after another. 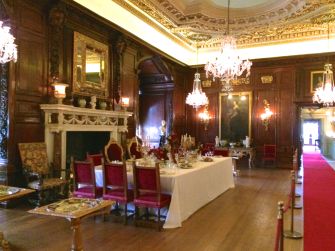 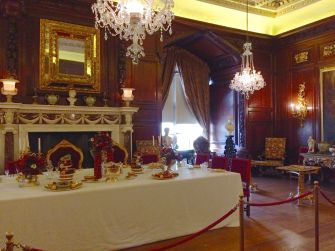 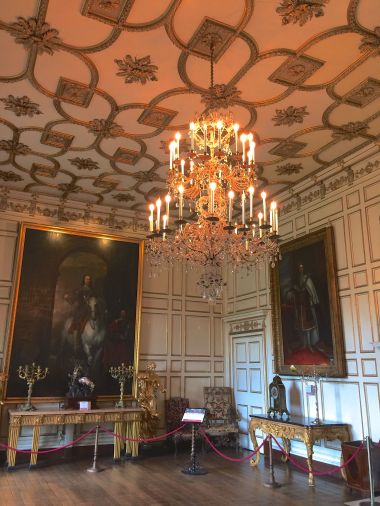 One of the rooms had been set as a tribute to Henry VIII and his six wives. Warwick Castle was once owned by the Tudor family (1485 – 1604.) It is said King Henry VIII never visited the castle and left it in a complete ruin.

If you are interested, starting from left to right the wifes of Henry VIII are Catherine of Aragon, Anne Boleyn, Jane Seymour, Anne of Cleves, Catherine Howard and Catherine Parr. There is a mnemonic “Divorce, Beheaded, Died, Divorce, Beheaded, survived” for anyone who would like to remember the fate of the wives. Nothing for remembering their names though. 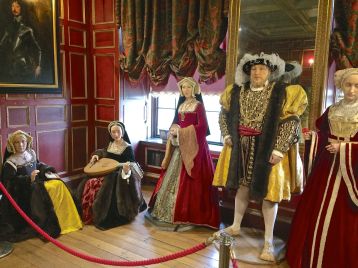 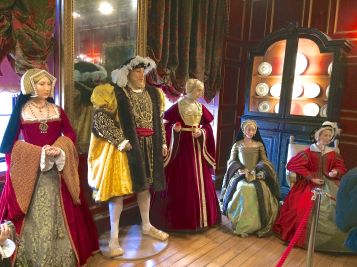