We had planned to stop at the bush camp right in the main area off Cowra but when we saw the stop we changed out mind. It was a car park next to a bridge and while that wasn’t a problem it was Saturday and the car park was full. We had several options. Van park, wait round until everyone went home or continue driving. We decided to go to the information centre first the find out what to see and do before making up our mind. 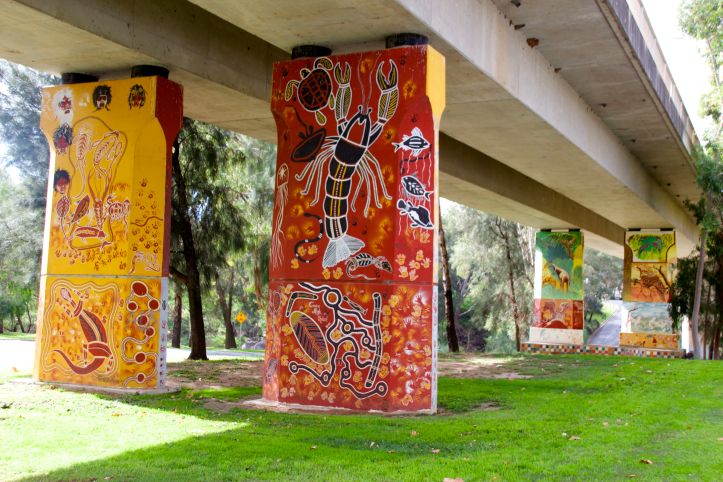 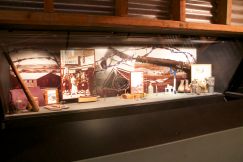 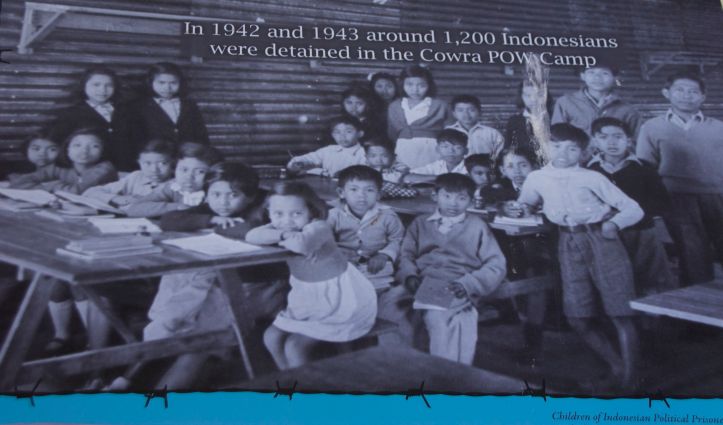 The camp was known as Number 12, (there were 28 such camps in Australia during WWII.) Camp 12 was originally planned to have tents for accommodation and be divided into two compounds. When it was completed the camp consisted of 4, 17acre compounds. Each section was designed to hold 1000 prisoners with a main thoroughfare running though the middle of the camp. The thoroughfare was nicknamed ‘Broadway’ as it was always lit up at night. Each compound was surrounded with a separate perimeter fence, made up of 3 barbed wire fences, 9m (30ft) apart. Inside this area was a mass of concertinaed barbed wire. Outside the perimeter fence was a raised earthen walkway. The guards used the walkway as they patrolled the fences. This was nicknamed the ‘catwalk.’ Then there were several large towers along the perimeter fence line. Men from the 22th Australian Garrison Battalion were responsible for guarding the prisoners. Most of the men in the 22th had seen battle in the Great War and some had served in North Africa. Other were men medically unfit to fight overseas but they could still do their bit and guard. 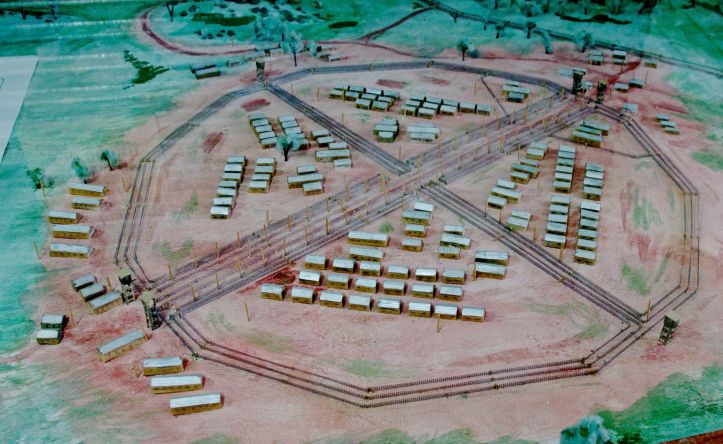 The prisoners were treated well. There was a free weekly issue of 35 smokes per person and an option to buy more if needed. They had plenty of blanket as Cowra nights are cold in winter. The food was plentiful with rice being brought in specially to go along with the fresh fruit and fish, which was added to the Aussie, diet of meat and veg. It was said the prisoners were better off than the garrison troops. All POW officers were also issued with pillowslips and sheets; this concession was not granted to Australian soldiers of any rank.

Why were the prisoner treaded so well? Australia hoped such kindness would be given in return to the Australian POWs, specially the prisoner in the hands of the Japanese.

As I was reading everything the information centre had on the Cowra camp Adrian was talking to a staff member. He was told about a bush camp, Farleigh’s Reserve only 9 ks out of Cowra.   The camp was beside a river and only the last bit of the road was gravel, it sounded good to us the decision was made.

After setting up camp we drove back into town to look at the Peace Bell. I hadn’t heard of the Peace Bell before. In 1954 the first peace bell was installed in the forecourt of the United Nation headquarters in New York. An appeal had gone out to 65 member countries to donate coins. The coins were melted down and the bell was cast.

A total of 106 countries have contributed coins to the cause over the time, and so far 23 bells have already been built. Normally the bell would go to a capital city so why did Cowra receive one? Cowra has greatly contributed to world peace and was awarded the honour for it’s stand on world peace. On every World Peace Day (the third Tuesday in September) the peace bells around the world ring out.

As we walked up to the bell the kid in me bell wanted to ring it. As we stepped into the rotunda a recording came on. It gave us a short history of the bell and at the end it asked us to ring the bell as a sign of our commitment to peace. What do you do? You ring the bell and you hope the world will hear it call. 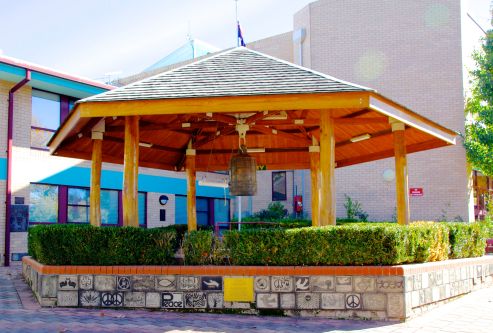 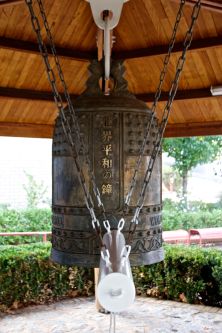 You may say I’m a dreamer

But I’m not the only one

I hope someday you’ll join us

And the world will live as one.

Our next stop was the cemetery. Part of the cemetery has been set aside for the Japanese prisoners who died the night of the breakout as well as those who died during attacks on northern Australia. The land has been ceded to Japan and is the only Japanese War Cemetery outside of that country. 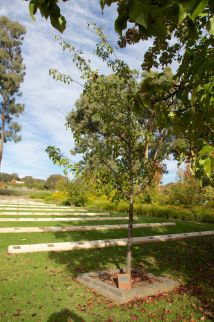 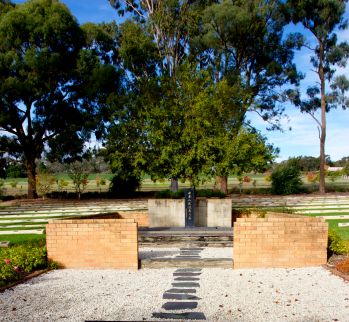 To the right of the Japan section of the cemetery sits the Australian War Cemetery. It holds the grave of Private Jones and Private Hardy along with servicemen who died at the Cowra Military Training Camp. 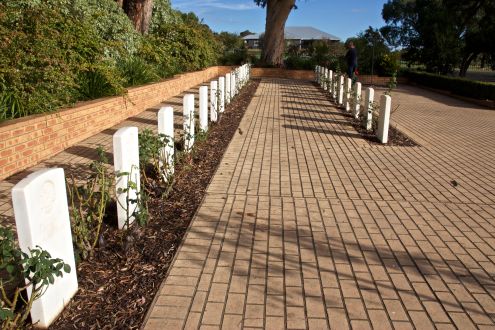 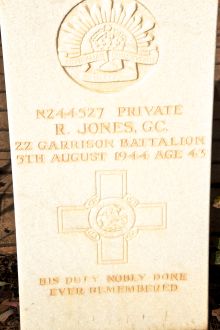 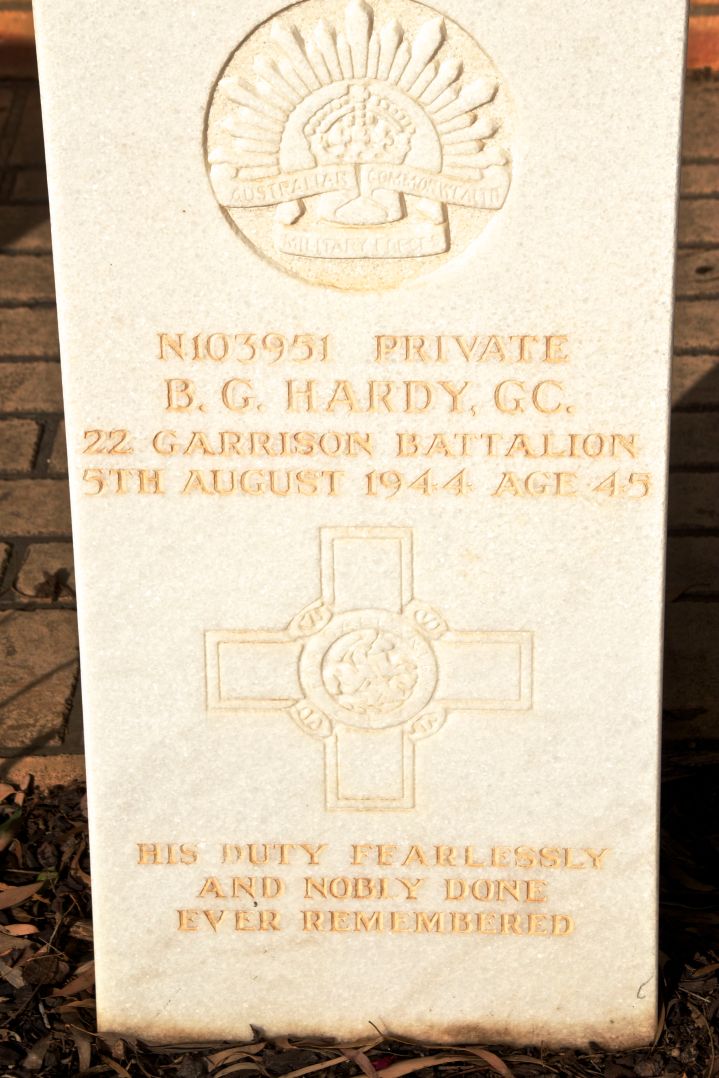 Although there was a strong anti-Japanese sentiment at the time the local RSL (Returned and Services League) showed the Japanese grave a lovely honour, by assumed responsibility for their care and maintenance. The care impressed the Japanese Government and when in 1971 a request for a Japanese garden to be built in Cowra to acknowledge this they agreed. Japan donated 1.6 million to the total cost of 2 million dollars. (The care of the graves has since be past to the Australian commonwealth War Grave commission.)