Bourke offers a Mud map tour of the town and areas of interest. I like that it wasn’t just a list of things to see and do. Where did the phrase ‘mud map’ come from? Australia has been given the credit for the bush saying. The story goes a group of people were sitting around a campfire near a billabong, passing on the latest news and swapping the best spots to find water along the road. One person reaches out for a stick and started to draw a map in the mud of the billabong to make sure his companion got the instruction right. Or it could have been that the companion walked away thinking to himself, ‘well that was as clear as mud.’

We stopped at a bush camp called May’s Bend which is past ‘The back O’Bourke’. The back O’Bourke is a small town just out of Bourke.  (The saying ‘Back of Bourke’ generally refers to the middle of nowhere.)

It was an interesting road in to the camp as it has been ripped up in the wet weather by vehicles. It was hard going in some spots. When we arrived I noticed the top part of my squeeze bottle of mayonnaise, which just would not drop to the bottom no matter how hard I have tried to shake it down, had dropped.

Like a lot of bush camps we go to, this one was set beside the river. (Of course we dropped out nets in.) Unfortunately there was no grass, just bindies and bushes. They had started to dry and drop the bindies. After a walk you would have to pull the seeds from the bottom of your pants and shoelaces. One of our neighbours had a lovely longhaired dog. Every night they would have to cut the bindies out off the dog’s fur. Poor thing she looked like a half shorn sheep when they left. 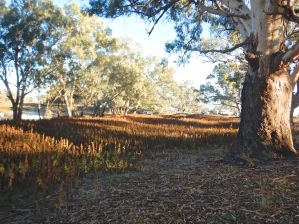 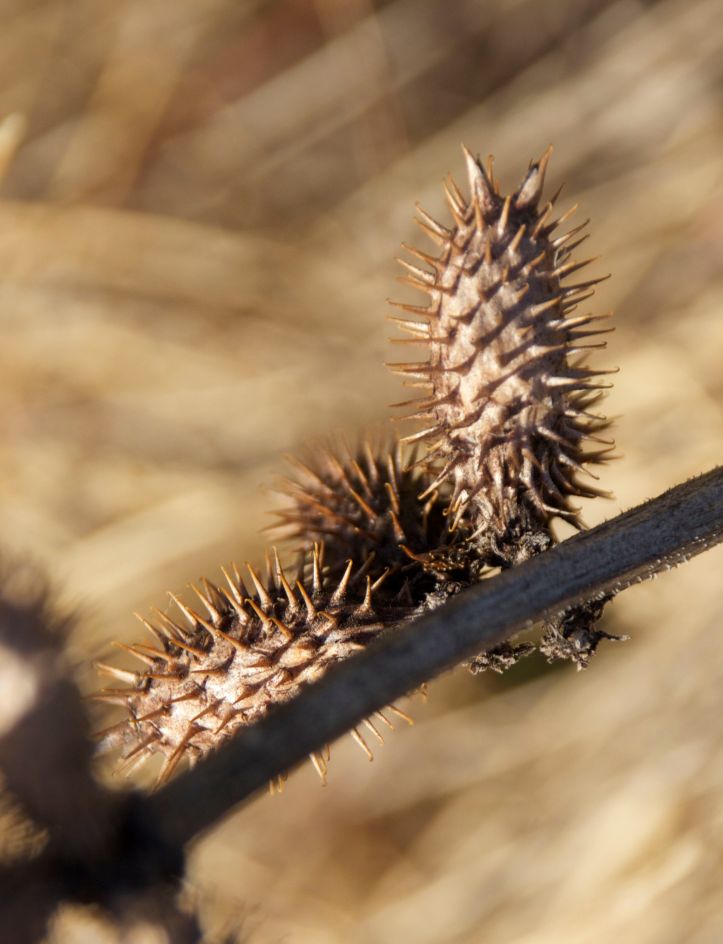 If you could get over the bindies the bush camp was a lovely place.

‘Take a leisurely cruise, the only sound you will hear is the splash of the paddles and the voices of the river.’

It did sound good so we decided to take the paddlewheel boat trip down the Darling River on board the PV Jandra. We joined about 20 other people for the trip. The interesting thing about the boat trip is, the local council runs it making the tickets quite cheap at $18 per person.

I picked up my camera to take that lovely shot of the boat and my battery was flat. NO. Not again. I had been having problems with my battery going flat before it should. I had though it was just the battery being old and I had purchased a new battery in Dubbo. With the new battery being flat without really being used it mean there was a problem with the camera. I smiled at Adrian and said, “well it looks like I am in for a new camera.” He gave me a look and told me we will get the old one fixed. “And where will I be able to do that? After all we are at the back of Bourke.” He just smiled.   I wasn’t without a camera I had to use my happy snaps camera instead. I always keep it in my handbag so I don’t go anywhere without a camera. 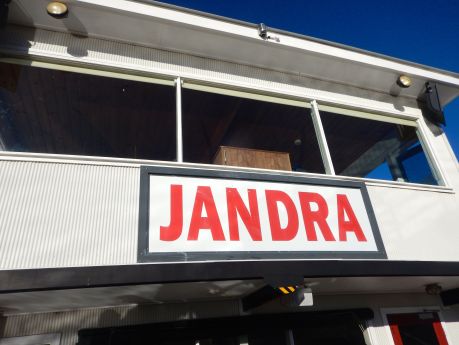 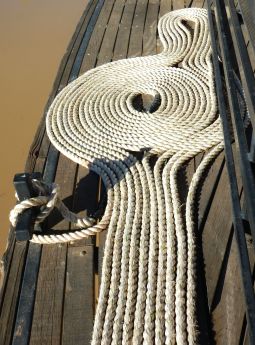 There was some birdlife along the banks, but before we could get close to them they took flight.

The paddleboat made it’s way up to the North Bourke Bridge. The bridge was opened for use in 1883. It was designed to allow a middle section to rise up allowing the large paddled boats to pass under. The bridge it the oldest moveable span bridge in Australia and the sole survivor of it’s type in NSW.  It is very remarkable considering when it was built.

The bridge was closed in 1997 when a bypass road was opened. It still looks good after 119 years of work and 20 years in retirement.

On Sunday’s the boat will make it’s way into the harbour of the town but for us the boat turned around just after the bridge. The trip back was much the same as the trip to the bridge with the birds flying off before we came too close. In peak season the boat runs twice a day and just in the morning for off peak. You would think the birds would be used to the boat and stick around for their photo to be taken wouldn’t you.

After our boat ride we drove into Burke to have a look round. It is a small town. We made our way down to the waters edge to have a coffee at the only coffee shop we could see open. Right next to the coffee shop was the historical Crossley engine. It is a fully restored 1923 vintage Crossley oil fuelled stationary engine. We were told it was a fine example of an early four-stroke diesel type engine, which followed on from the steam engine era. That really didn’t mean anything to me so I just smiled. This particular engine was used from 1923 to 1928 in the Sydney Power House. Then it was used in the Allowrie Butter Factory at Coffs Harbour until 1949 when it went to a Narromine Property. The engine pumped water for crop irrigation until 1964. The Bourke Shire council purchased the engine in 2001 and restored it. Now everyday at noon the council starts the engine up for the tourists.

We were a little early so we took a walk along the top of the bank next to the river. Several boys were at the bottom of the jetty fishing for yabbies. They had a large hunk of liver, which they cut off chunks to bait a hand held fishing line. For their efforts they had caught half a bucket full. I was very impressed with their efforts.

We continued our walk. I had noticed several galahs sitting happily in the trees. Sweet. 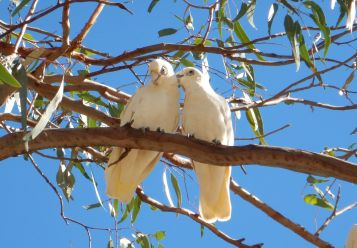 When we were on our way back the galahs took flight screaming as they do. By this time there were a lot more. We have had the galahs more than once in our bush camps but nothing like this. The noise was almost deafening.

We arrived back in time for the engine to be started by the council worker who had been our paddleboat crew. All the men were asking questions and the women were sitting back with smiles on their faces. Good to know I wasn’t the only one. I am being too mean. It was interesting to see the engine running. 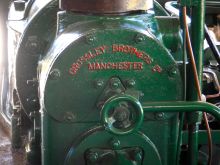 We drove out to the cemetery to see Fred Hollow’s gravestone. It is very inspiring. Fred believed that 80% of blindness is unnecessary. He spent most of his adult life trying to save the sight of as many people as he could. The Fred Hollows Foundation which, was started in 1992, has restored sight to millions of people in the developing world. Although Fred died in 1993 his legacy lives on in the work his foundation continues to do.

A former patient said of Fred.

‘A diamond has many facets, the more it has, the greater the glitter. This is Fred a diamond, priceless.’

Fred visited Bourke in 1972 and fell in love with the town. Although he was Chair of the division of Ophthalmology at the University of NSW at the time he was always drawn back to the town and now he will always be a part of Bourke. 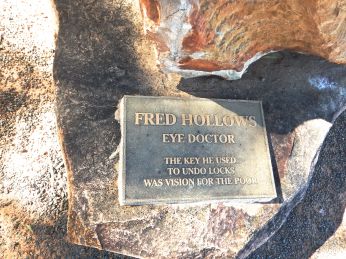