We detoured from the loop a little bit by going up the middle to Yowlah.

Yowlah is another opal town like Eulo. I had though opals were only mined at Coober Pedy but they seemed to be in so many different places in Australia.  Opals are found in many places that follow the shoreline pattern of the ancient Eromanga Sea. All the places seem to be hot and remote and Yowlah and Eulo fit that description. In Yowlah they find what the local call nuts. The nuts are a special type of opal, found only in the dry country that surrounds the small town. The Yowlah nuts look like irregular shaped lumps of iron. They are a little mystery that is waiting to be found. Not all nuts contain an opal and they must be opened to find the treasure within if you are lucky.

We had two choices of camps for the small town. There was a bush camp in the middle of the town or the van park. We were going to stay at the bush camp but once we had a look at it we changed our minds. Not that it was bad, as we have stayed in worse. It just wasn’t good, so we chose to stay in the van park. The van park was only $8 a night for unpowered and it offered free washing machines as well as free Artesian baths. Sounded good to us.

After setting up camp we went for a look round the park. Outside of the camp kitchen is a large fire pit. The van park owners have damper cooking on each Wednesday night and served it with some lovely Eulo honey. We would be back for that. 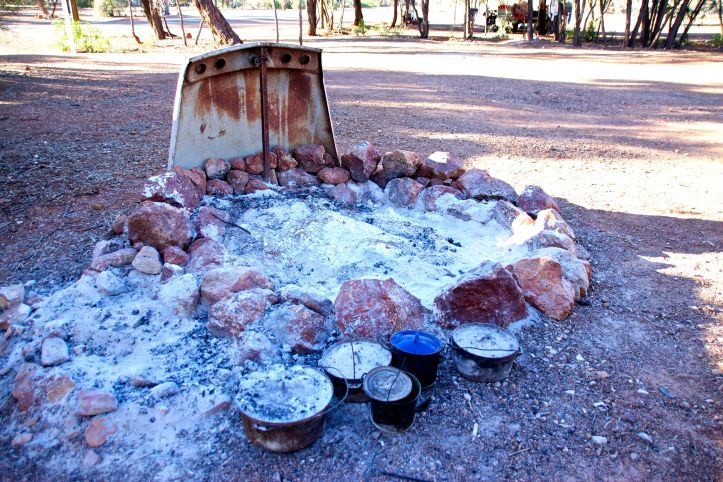 The camp kitchen was very basic. One corner has been set-aside for children with games and books as well as some colouring pencils for the children to help decorate the kitchen. What a sweet idea.

We found the artesian baths. If we had thought the kitchen was basic the baths was simular. There were 3 rooms in all with two baths in each room and no ceiling. I have been told it is romantic like that. You can lie back in the hot water with a glass of wine and look at the stars above. I am not that romantic. I just thought ‘it will be cold.’

The Artesian Bore is out the front of the admin building come café for the park. The bore was sunk in 1911 and since then it had pumped roughly 1,145,666 litres (252,00 gallons) of water per day at a temperature of 57o (129 Fahrenheit.) The bore wasn’t much to look at considering the amount of water that is pumped though it in a day. 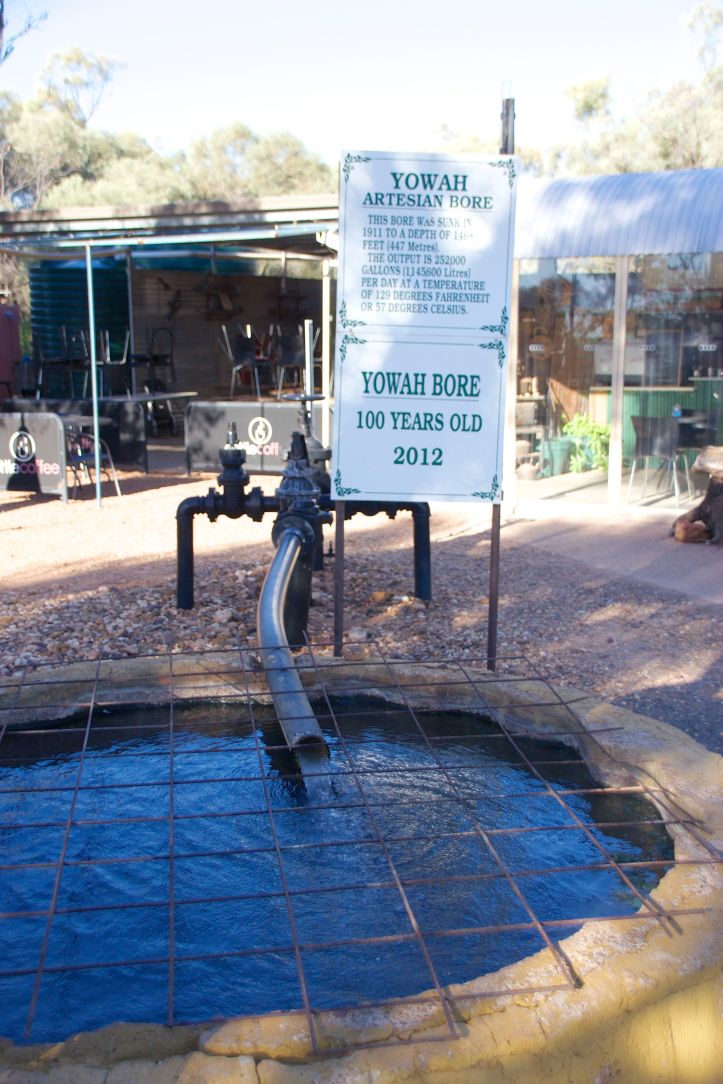 We decided to go and have a bath. It was only 4 in the afternoon so there would be no moonlight or stars but as I didn’t have a glass of wine and it is wintertime 4 o’clock was a good time to take a bath. We took some music and laid back, enjoyed and soaked until the water went almost cold.

Come 6pm we made our way to the camp kitchen to have a try of the damper. One of the owners of the park was there to greet everyone who came. To start with we were the only ones but soon others arrived. The damper was still warm from the fire. The butter melted as it was spread across the bushman’s bread and we drizzled the Eulo honey all over it. Mmmmm. I went back for second helpings. The honey had a lovely unique flavour to it. We chatted away to the owner of the van park.  It was a nice way to start the evening. I even took some back to the van with me. By the time we reached the van the honey had dribbled over the side and all over my fingers. That’s what I get for being a pig.

The next morning we took a walk around the town. We started at the local pool. The change rooms had been made out of a water tank and there was a warning sign on the pool wall asking people to monitor their time in the pool. They suggested 20 minutes at a time in the hot pool was enough. 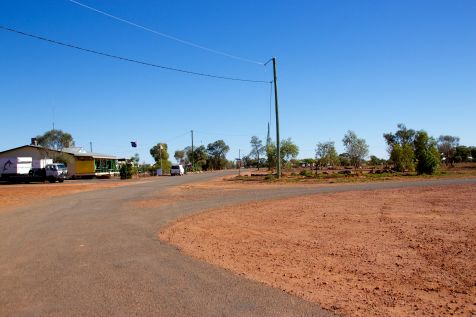 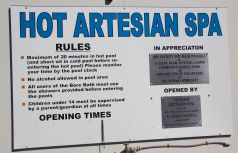 We moved on to the local museum. It was just a room to the side of a shop. You had to go into the shop to get to the museum. It was filled with many things old and dusty. The museum did tell the story of a miner who after years of working his mine and occasionally finding nuts worth $400 and $500 giving them just enough reason to keep going hoping to find the big one. To reach the bottom of his open cut quarry he had carved out a set of steps. Finally the only part of his claim left to dig were the steps so he started to dig them up too. On the second last step he dug what was the largest Yowlah nut ever found.   It was bigger that a football and weighed in at about 45 kg. At the time it was valued at more than $500,000. Everyday he had walked over the fortune not knowing that riches were just below his steps. What is he doing now? He is still mining. It is in his blood he tells everyone.

There were several opal shops in the town. It seemed most houses have a room set aside where they sell to the public from their own mines. All the good stuff is sold overseas. It is a shame but the local people just won’t pay the price the overseas buyers will pay. In one shop I purchased a token gift for my granddaughter and a small opal for myself. Each opal has it’s own colours. In Cooper Petty they had a dominant white colour to them and in Lighting ridge the dominant colour was black. In Yowlah it was a sparkling brown.

You know you are isolated when there is a number for the flying doctor and police from another town everywhere so the tourists will be able to find it easily. I though about the conversation I had with the van park owner the night before. They had bought the van park 2 years ago and were slowly doing the place up. They had tried growing grass for the van park but the cows would come in and eat it whenever it started to grow. (The town is part of a cattle station.) I did wonder why they would want to buy the van park? As we had walked through the town we had seen one house after another was up for sale. It appeared there were more homes with a ‘for sale’ sign that without.   We had spoken to one person who has said the average age of people in the town was 65. The school had closed although the buildings were still there. The locals know once the school buildings are removed they would never get a school back into the town.   The lack of a school would make any family with children rethink about moving into the town. Without children a town has no hope of surviving. It would be a brave move to buy a business in a dying town.

After the walk around town we decided to go out to the lookout.

Kangaroos jumped out of our way as we reached the top of the hill and goats went running. You could see for miles and miles. Flat red earth cut only by the colour of the trees. It is an amazing country and it takes an amazing person to live here. It is blistering hot in summer and freezing cold in winter. I know I couldn’t live in a place like this. 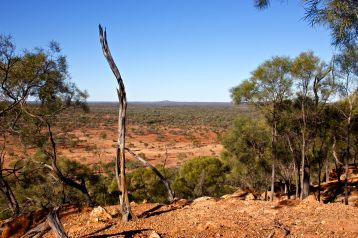 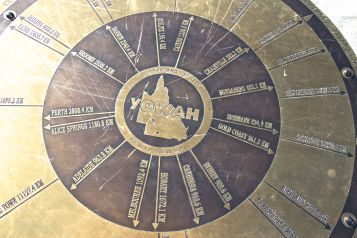 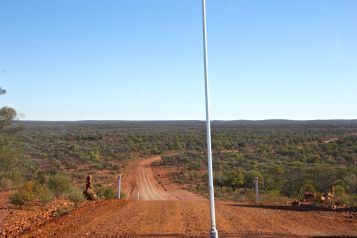 In the afternoon we decided to have a go at fossicking in the fossicking fields on the edge of town. We picked up several rocks but none showed any opal. I would have been really surprised if we did find anything of value, as I am sure the ground would have been picked over millions of times before us. Mind you if there was something there we probably wouldn’t have known what to look for. 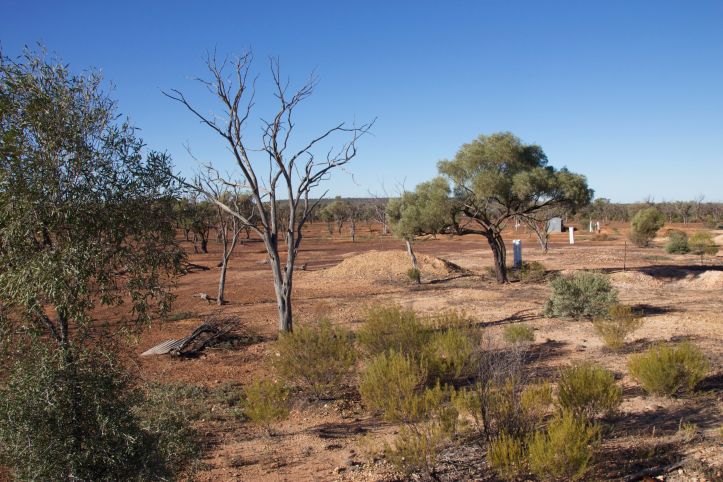 On our second night, the van park was having duck racing and a cooked dinner. It was $20 a head for a 3-course meal. You had to take your own plates and knife and forks.  It sounded like fun and I am always happy when I don’t have to cook so off we went. A dollar would buy you a duck for the night and all the money raised goes to the Royal Flying Doctors.

There were a hundred ducks to buy and they sold a hundred and sixty ducks. Why stop when you have run out of ducks?

The ducks were placed into the bore, which flowed into the Yowlah Creek, which really was just the overflow from the bore.   They would be caught a little way along the creek.

Being night we could see the steam rising from the water. It was a good thing the ducks were plastic. I don’t think live ducks would have been too happy to paddle around in the hot water.

There was a feeling of excitement as the ducks were lined up for the race.

Then they were off. There was a marshal to make sure none of the ducks became stuck on the side of the bank and each one had a chance to be the winner.

The race was over in a moment and the winning ducks collected. 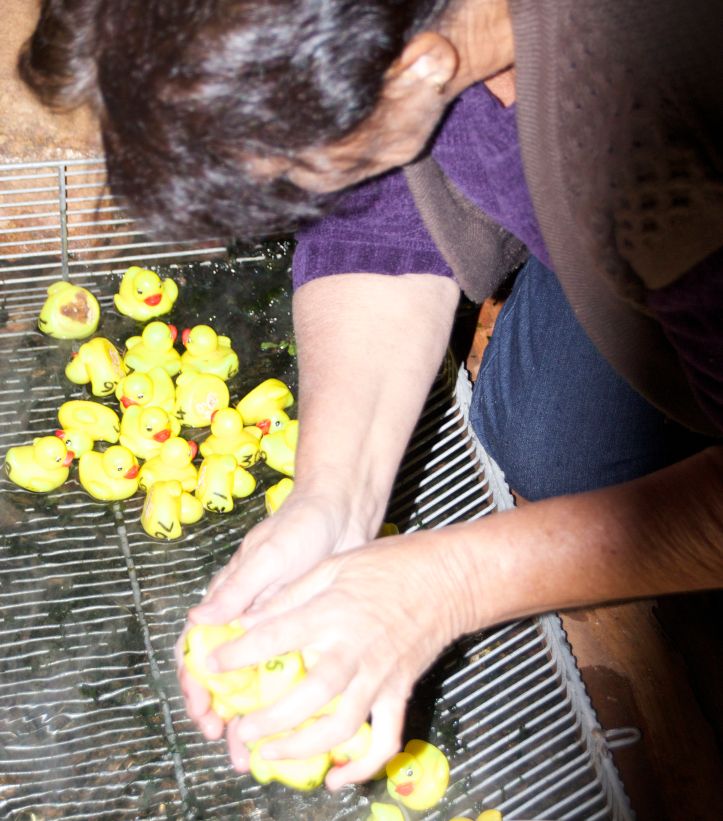 We wouldn’t know the outcome of the race until after dinner. The dinner was nice. We had a choice of soup then there was a roast with all the vegies I don’t like. The poor man who was handing out the vegies was surprised when I refused the carrots and beans. As I only had a small potato on my plate with the roast pork he gave me lots of broccoli. Thanks for that I was just about to say ‘only a little of that’ when he dumped it on my plate. The broccoli didn’t go to waste as Adrian ate it. After dinner there was dessert of cake with a little custard.

Then came the big announcement. We were thrilled to find out our duck had come in third. Our prize was an opal. Fantastic. Not really. It was just a sliver of opal on a rock. I was still happy.