Qantas museum. The Queensland and Northern Territory Aerial Service or Qantas as we now all know it, started in 1922 in an iron shed with two small planes. That shed was included on the National Heritage List in 2009.

As you walk into the museum you are greeted with model planes flying around the ceiling. Nice touch.

I was impressed with how the museum was set up. Of course there were glass cases holding important items and there was lots of reading ,but chairs were set up for people to relax as they read. There were small TV’s set up in some of the glass cases with video recordings of people telling their personal stories. 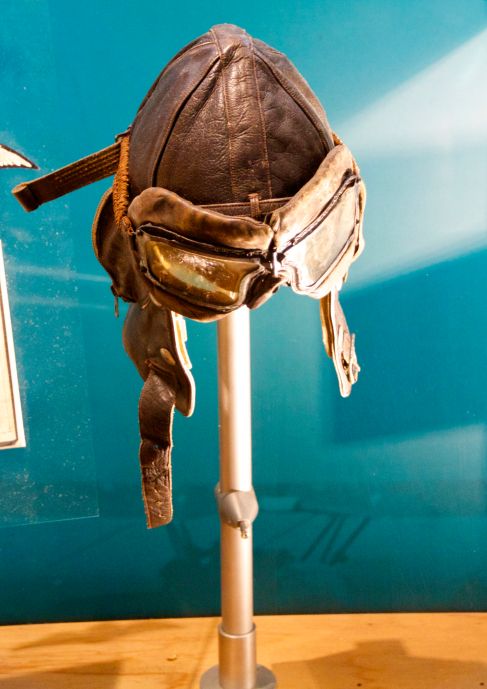 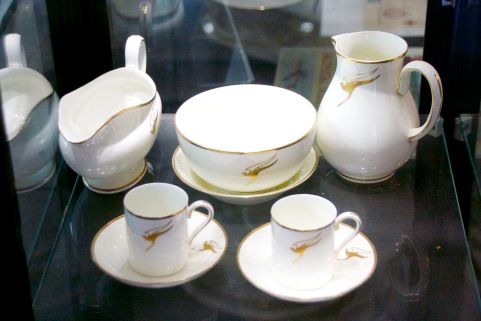 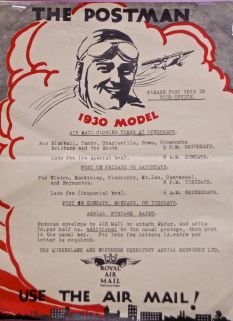 A great friendship started between Hudson Fysh and Paul McGinness while they flew together in the Australian Flying Corps. The idea for creating an air service in Queensland was formed in the last 6 months of WWI. It was a reality just 2 years later. At the time the horse and buggy were still a common form of transport and cars weren’t seen as a solution to traveling the vast countryside of Queensland. To start with Qantas would be competing with the Cobb and Co coaches traveling the very same routes. It wasn’t an easy thing to start an airline as few people could grasp the potential of it. The local joke was that the Qantas hangar would make a good woolshed.

(The traveling time for the coaches was based on 10 miles per hour and included overnight stopovers. The time could change greatly depending on the weather, as the roads could turn to mud very quickly making it impossible to continue on. At the time an average weekly wage was around £2 a week.)

A great airline doesn’t happen overnight. Fysh and McGinness needed to stir up interest and do it as quickly and cheaply as possible. They turned to joy flights. To make sure they didn’t frighten any passengers the flying was always moderated, (however for £5 McGinness would do a loop.) In just two months they flew over 22,000 kilometres, were in the air 209 hours and carried 581 passengers. Not bad considering the passengers had few comforts. The planes were noisy and passengers were often temporarily deaf after landing. The engine often sprayed oil, hitting everyone and the passengers were jammed into a cramped space. If you were taking one of the longer flights there were no onboard toilets and definitely no food. 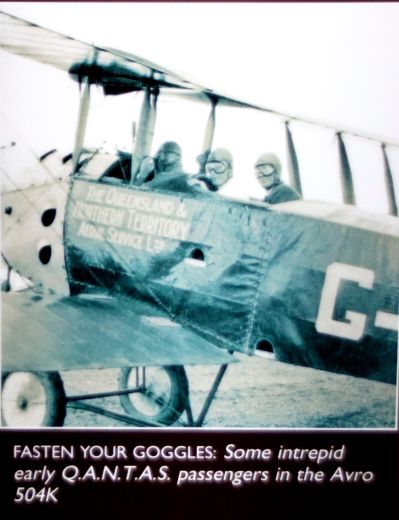 Unfortunately the joy flights and passengers were not bringing in enough to keep the planes in the air. Qantas decided to promote the idea of a regular airmail and passenger service. It was subsidised by the government and it gave Qantas a reliable income.

Paul didn’t stay with the company for long. He resigned and travelled to Western Australia where he tried to start a new airline but failed. He tried farming as well. He died in 1952. Hudson stated Paul was “the bravest of the brave” and “Qantas would not have happened without him.” 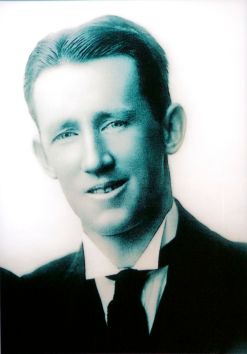 In 1924 Qantas obtained a purpose-built plane the DH-50. Up until then converted WWI planes were used. The passengers got to sit in comfort being that the roof was closed in and everyone, except the pilot, was protected from the sun wind and rain as well as some of the noise. The plane was so successful Qantas built 7 between 1926 and 1929. A copy of what the cabin looked like was set up and you can climb into the cabin and try the seats out. I can only imagine what it must have been like to travel for several hours in the seats. I will never complain about the seats on a plane again.

A flight simulator has been set up in one corner of the museum giving everyone a good laugh at how not to fly a plane. Yes both Adrian and I had a shot. It is not as easy as it looks. I kept an eye on the simulator and smiled whenever any new person tried her or his luck. No one got it right. 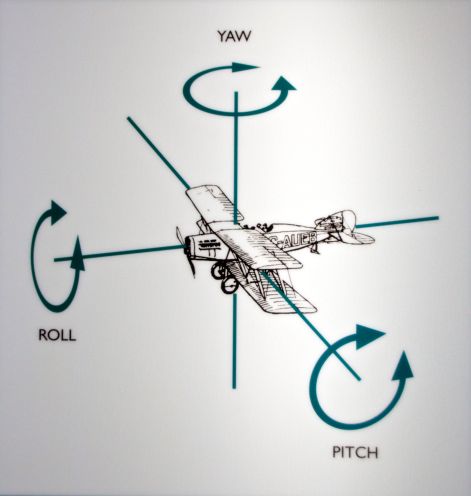 There were no instruments on the first flights. You had to navigate by sight. If you knew the area you were ok but if you didn’t you had to follow roads or telegraph poles if they were available. Being lost was always in the back of the pilots’ minds. If you went down in the middle of the outback you many not be found alive.

In 1934 Qantas started to fly overseas to Singapore starting from Brisbane. The pilots had to learn new techniques for the long distance flying and navigating over the sea. For the first time the Qantas pilots would be flying at night as part of the journey. Not an easy task. It was decided the distance between Longreach and Cloncury – a distance of 500k would be the safest part of the journey to fly at night. How did the pilots navigate over the flat terrain? Six revolving high-powered lights were set up along the flight path. Five of them were mounted on beacon light towers set approximately 100 k apart. The lights would rotate at a different speed enabling pilots to confirm where they were.

Although about a third of women in Australia went out to work at the turn of the century, they worked mainly in factories or as domestic staff, (it wasn’t until 1915 Sydney saw it’s first policewomen.) After the war a new revolution started to happen in the workforce. It just wasn’t the men that took to the skies. More and more women became pilots. It wasn’t easy for them. One female pilot tells the story about how one day she was walking through the door at work just as someone rang the office wanting a plane to pick up something. She was put on the phone to get directions to where to land. She said there was silence on the other end thinking the connection had been lost she repeated hello again and she heard a stunned voice “my god it’s a woman.”

Outside the main building of the museum sits a Catalina flying Boat. It was the last flying boat operated by Qantas. On the information board beside the plane I read the Catalina was used to cross the Indian Ocean between 1943 and 1945. Qantas created and still holds a world air service duration record that has never been broken. Impressive.

During WWII Qantas operated a secret air service between Ceylon, now known as Sir Lanka and Perth Western Australia. The unarmed Catalina flew in total radio silence and with virtually no navigation aids. The plane carried so much fuel that if anything happened in the first nine to eleven hours of the flight they would either crash or be forced down onto the ocean. The distance of 8,780 miles was flown over Japanese dominated Indian Ocean, and re-established an air link to the United Kingdom. The flights were non-stop and the average flight time was twenty-eight hours and was known as the ‘Double Sunrise”. The planes would carry a limited amount of mail and military despatches. There were never more that four VIP passengers. At the end of the war the aircraft were retired and sunk.

The plane was open for our inspection. If I though the seats and the condition in the DH-50 was bad, when I saw the condition of the Catalina, the DH-50 started to look better. I still won’t complain about an airline seat again.

Once in the Catalina you could press a button to hear a little more about the history of the plane. One bit that got me was, as the flights were secret missions the men were not aloud to speak about their work or even wear their uniform at any time. Being strapping young men people wondered why they were not in uniform and many of the men were harassed and were called cowards.

It must have been a really hard for the crew. Not only did they have the pressure of the war but also to be called cowards. As part of the museum the original hanger is open to the public. You are greeted at the door with a warning sign tacked onto a 44-gallon drum. It tells you about taking care on the floor, after all they are almost 100 years old. 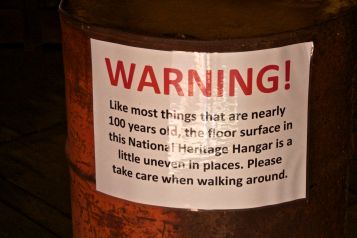 Qantas paid £1636 to have the shed built in 1922. It had no floor, no doors and no electricity. It was made from tubular steel and corrugated iron so white ants couldn’t eat it. The doors were added in 1923 and the floor a year later, after that electricity was connected in 1925. Qantas started to build planes and between 1926 and 1929 they built eight in the shed. Qantas was one of the few airlines in the world to build its own aircraft. 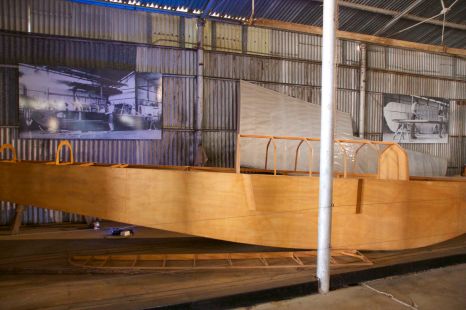 As we walked around there was old 20’s music playing. I though it was a nice touch to add to the feel of the place. The Engineer Arthur Baird started the practice by introducing music to the workplace. He had a wind-up gramophone and collection of 78-rpm records. It was said the collection was one of the popular tools in the hangar.

The hangar was the start of the Qantas Museum in 1996 and is the oldest civil aviation structure in Australia. 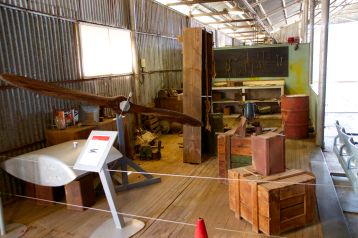 The symbol we all know that marks any plane as Qantas started out as a joke. Qantas started using converted Liberator bombers on the Indian Ocean service in 1944. Marketing called the flights ‘Kangaroo Routes’ so the engineers converting the aircraft copied a kangaroo, which was on the penny coin, to sit under the flight deck windows. From there the flying Kangaroo was born.

We spent most of the day at the museum and I am sure I still missed some things inside the museum. Well worth the time. You can also get a tour of a plane and do a wing walk. That cost extra so we gave it a miss.