The next day we went to have a look at the ‘Musical Fence.’ Sounds intriguing doesn’t it? It was commissioned in 2003 for the Winton Musical festival and was created by artist Graeme Leak. The fence is a musical instrument, which can be played with almost anything. People can find different notes by pressing and sliding a hand up and down the wires while striking the wire with a stick or anything. There was more than just a fence; other items that made sounds were scattered around the area. We had a lot of fun going from one item to another. I stopped singing (to Adrian’s relief) when I started getting some odd looks from the other people there. They just don’t know real talent when they hear it. I couldn’t see the problem myself. I was making music and singing along with it. I will have you know I am really good at sounding like a cat in pain. It is a gift I know and I have it.

Willie Mar’s Chinese Market Garden and shop was up next on our list of things to see in Winton. Chinese gardens started to pop up around Winton in the 1895s. Despite drought conditions they seemed to have no trouble growing fruit and vegetables. Willie Mar started his garden in 1927 and when he retired his son also called Willie took over. The garden only ceased in 2000 when his son retired.

The gardens had been preserved almost as it has been left, by the ‘Friends of Willie Mar’ which is a local volunteer group who aim to look after the site as part of our cultural heritage. The gardens are thought to be the last operating traditional Chinese Market Gardens in Queensland.  A Chinese Market Garden differs from the average veggie garden as the Chinese gardening practices guaranteed the continual crop yield by using irrigation ponds and channels with the use of liquid manure as fertiliser.

Willie worked as a cook and gardener on a number of stations before becoming a shopkeeper and market gardener in Winton. Willie had the reputation of cooking the best ‘Porcupine Stew,’ in the area, it seemed the porcupine (echidna) was seen as a delicacy and only Willie could cook it ‘just right.’ For some reason I find that last bit of information a little unsettling. Eating an echidna just doesn’t seem right to me but I guess way back then you grab fresh meat when and where you could.

Willie’s wife, who was a lot younger, lived in China and he rarely returned home to visit her. On one such extended trip in 1929 a son was born. Willie returned to Winton and didn’t see his son again until 20 years later when Yen Shoo or Young Willie arrived in Winton. Young Willie didn’t remember his father before he arrived and didn’t speak a word of English. Willie started to teach his son the family business and when he died at the age of 86, just five years after Young Willie arrive in Australia; Young Willie took over the business. Being ‘an Alien’ Young Willie had to prove to the government his business ability or he would be deported. Young Willie set about being the best Australian he could be.

The local people remember going to the store for their veggies. The store was small and dark having no windows. They recounted that when your eyes adjusted to the lack of light you would see boxes and boxes of fresh vegetables kept cool under damp potato sacks.   Often there would be the odd cat or two curled up on top of the damp bags. Young Willie would greet his customers with a jolly smile and say “Good Day …. You like?”

The veggies would be placed in handmade bags (made out of newspaper held together by flour and water paste.) You would be told to put your hand under the bag and to watch the bottom.

A large mango tree was planted in the middle of the garden and the fruit was given away when in season. Willie also grew peanuts along with a long list of fruit and veggies. The peanuts would be boiled onsite and provided a juicy, wet and salty treat for children who came shopping with their mothers. Willie would deliver the veggies three times a week. To start with the delivers were made with a horse and spring cart and later an old Bedford truck.

Each year the Willies would let a portion of the veggies go to seed. The seeds would be collected, dried naturally and stored in old jars and paper bags so planting could continue the following year. In later years with seeds becoming more available, the Willies took advantage and the commercial varieties were used alongside the traditional seeds they had collected.

Willie retied in 2000 after flood wiped out his garden after 70 years of operation. 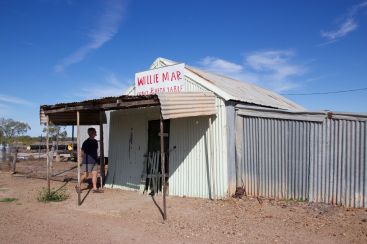 I was surprised with how dry and desert like the ground was. I couldn’t imagine anything growing let alone a thriving fruit and veggie garden. Apart from the shop and house there is nothing left of the business. I couldn’t imagine how he running the business from the buildings we saw either. They would have been like an oven in the summer and a freezer in winter. Amazing. 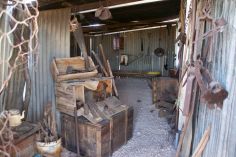 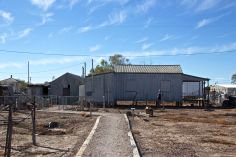 We would have gone to the Waltzing Matilda Centre but it had burn down in 2015. They are rebuilding it but it is not expected to be finished until 2018. We had heard good thing about the museum so it was sad we had to miss it.

We keep a day each for the Age of Dinosaurs tour and the Dinosaur Stampede.