We had been told the bush camp at Richmond was a dust bowl. Yep it was but a nice dust bowl. Young trees had been placed along the outer edge of the camp and in a row down the centre area. When it is free why complain about some dust. Give it time and I am sure the camp will blossom. When we where there, there was no wind. Maybe I would have a different opinion if dust had been whipping around the camp, but for me, I enjoyed out stay.

The main reason we were in Richmond was to go to see the dinosaur museum.  Right out the front of the museum sits a Kronosaurus. This thing is massive. Before you even pass though the doors there is a sense of excitement after looking at the monster. 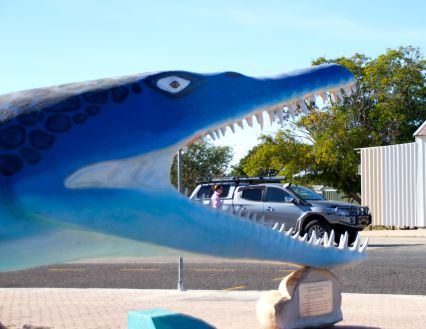 The excitement from outside continues in the museum. There are life size replicas hanging from the ceiling and painting on the walls. (I am getting into this dinosaurs thing.) We were given an audio stick when we arrived and away we went. Each exhibit had an information board and a number. The audio stick gave everyone extra information.

The first exhibit you see when you walk thought the doors, is the Kronosaurus. Mr Entriken found the near complete specimen in 1979. A comparison was displayed with a saltwater crocodile jaw to the jaw of a Kronosaurus. Wow! the difference in size was amazing. It is thought the Kronosaurus had a bite force of 30,000 newtons, which is nearly twice the power a crocodile has. Did I say wow, well I will say it again. Wow, and I don’t even know what 30,000 newtons really means, it just sounds like a lot. It seems fitting to name him after the Greek titan Kronos who wasn’t a very nice person.

As like the other places we have been to on the dinosaur trail Richmond was part of the inland sea. While mostly land based dinosaurs have been found near Winton and Eromanga, sea based once have been found around the Richmond area.

It wasn’t all about the Kronosaurus; the museum had fossils of an Elasmosaurid as well as others. The Elasmosaurid had a long neck, which would have stretched over half the length of the body. It had over 70 neck bones while we have 7, giving it more neck bones (cervical vertebrae) than any other animal with a backbone. Impressive. It is rare to find a complete neck on most fossils as they often detach and drift away during decomposition. The neck also makes an easy target for predators. The museum has a head, which they believe, has bite marks possibly made by a Kronosaurus on it. I couldn’t really see the bite marks myself.

The experts aren’t too sure why their necks were so long. Some of the theories are that is was used to attract potential mates or it could have been used to reach inside tight spaces helping it feed. I was surprised to read some fossils of the Eromangasaurus have been found in Western Australia. I will have to look into that when we get back there. 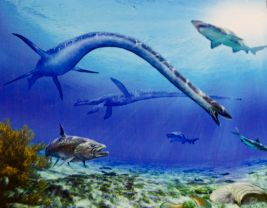 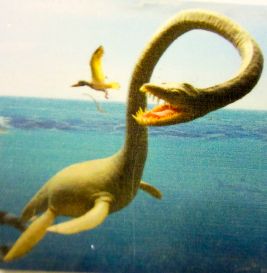 As well as the big dinosaurs on display there were some molluscs as well. They are the most common preserved fossils found around Richmond. The molluscs evolved into what we now recognize as clams and mussels as well as sea snail and cephalopods. It has taken only about 500 million years to do it. 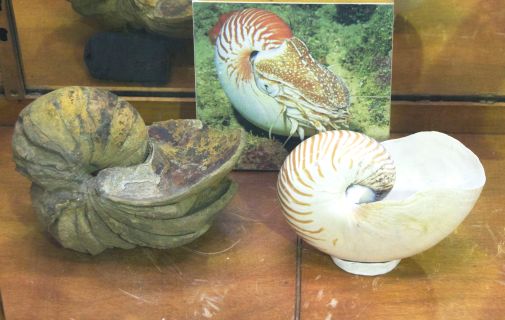 Some of the fossils have been found in moon rock. As we have travelled I had seen some moon rocks but didn’t know much about them. They are formed by the accumulation of calcium carbonate-rich sediment around objects and would have rested on the bottom of the sea around 100 million years ago. They are mostly round in shape due to natural chemical processes while they have formed. Around Richmond they have found lots of the rock with fossils hidden inside. Probably their best find was of an ichthyosaur skull, ribs and fin. That moon rock weighed over a tonne and a backhoe had to be used dig it out. On being transported, the rock broke apart revealing the left sclerotic ring (the bone surrounding the eye) and part of the jaw with interlocking teeth.

Even though the museum is in a medium size building the fossils just seemed to go on and on. There was just so much stuff to look at. The Kunbarrasaurus was there as well as some fish bones and turtles along with other things. 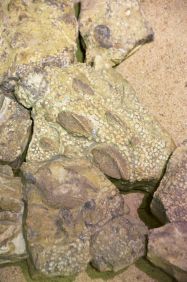 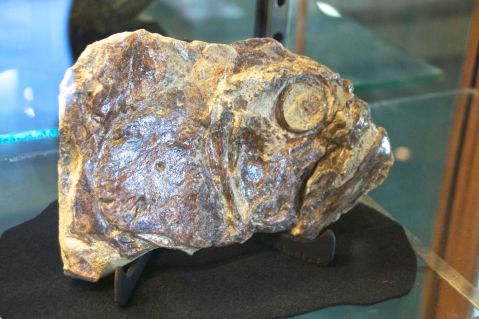 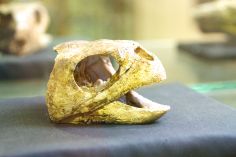 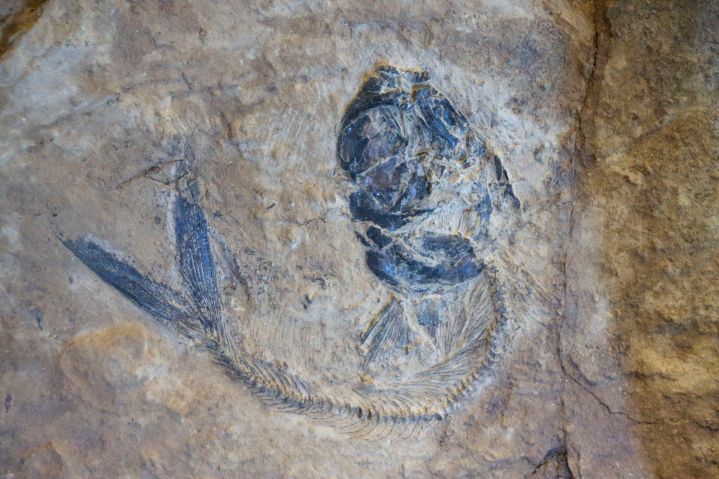 There was a children’s corner set aside. I was impressed with how it was set up. Instead of a sand pit, there was a bead pit. The children can uncover dinosaurs’ bones as they play, they are imbedded in the bottom of the pit. There was also a dinosaur ride and a big dinosaur waiting everyone. There were jokes on the wall as well as the dinosaur colouring picture. Nice 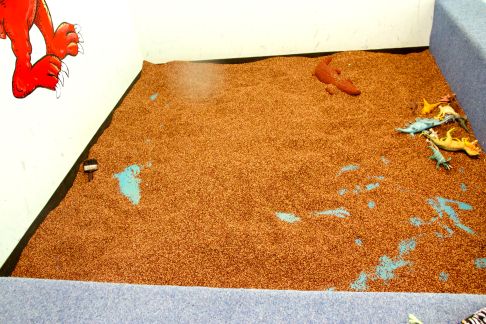 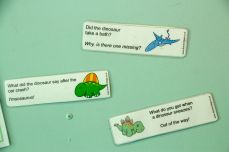 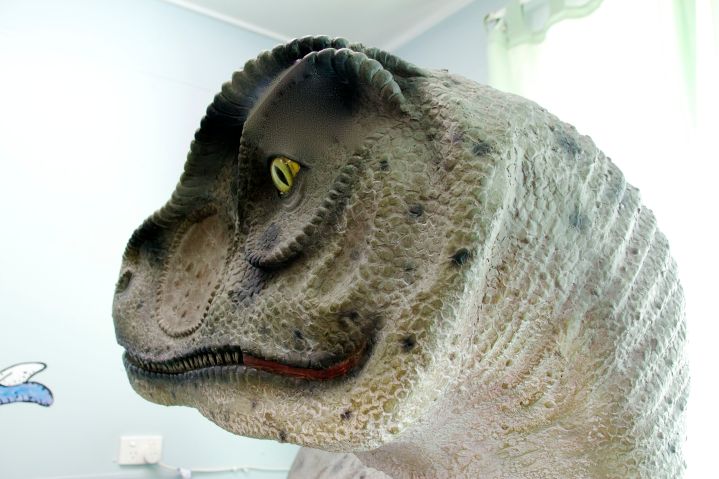 Outside of the corner a table had been set up for the adults. It was stacked with bones and magnified lamps.  It is nice to know the museum has a hands-on approach.

In the last room of the museum is an almost complete Richmond Polycotylid. It is the most complete plesiosaur skeleton discovered in Australia. It was so intact that the experts could tell the animal had survived several attacks and there were traces of abnormal bone growth (possibly arthritis) in the neck. All this would suggest the animal was mature when it died. After the bones were first discovered in 1989 they were set to the Queensland Museum before returning to Richmond in 2012. 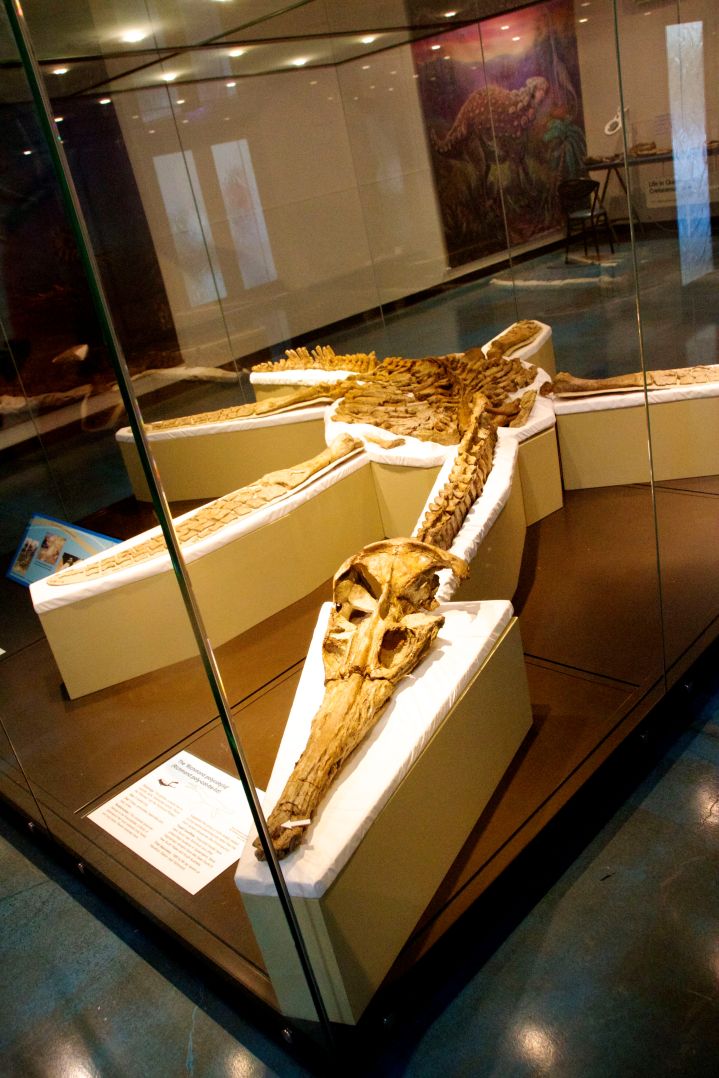 The museum was amazing but I don’t know if I leaned anything. It was a bit of over load with everything for me. I think I rushed with excitement from one item to another when I should have stopped and really had a good look. 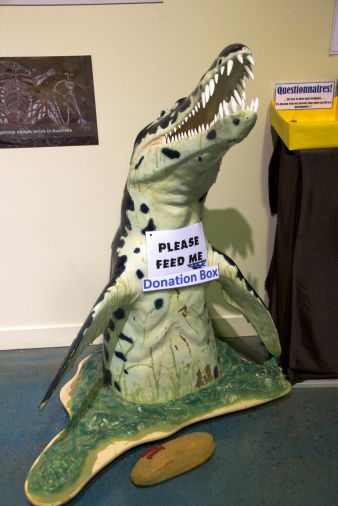