We stayed at the bush camp on the edge of town. It is an interesting set up. Stay on one side of a fence and it is free, but you have to be self-contained. On the other side of the fence it cost you, but you do get power and water with the use of the toilet block. We chose to go free.

I had thought the town was going to be a lot bigger that it was. Hughenden was our last stop on our Dinosaurs trail. The Flinders Discovery Centre was only $5 to get in. We didn’t have to pay, as it was part of our trail ticket

You are greeted with what looks like a completed Muttaburrasaurus as you walk into the museum. When it was first discovered it wasn’t a complete animal. The first part of the dinosaur was discovered in 1962 near Muttaburra. This is where it derives its name. The second part was discovered in 1987 near Hughenden. The missing bones have been reconstructed from related dinosaurs such as the Iguanodon from Europe. The skeleton isn’t real bone but a cast made from the bones. The real bones are too heavy to mount for display. That didn’t matter to me I was impressed with what I was looking at. Love the hands. 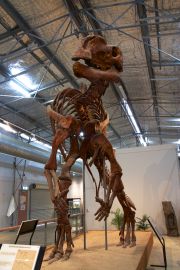 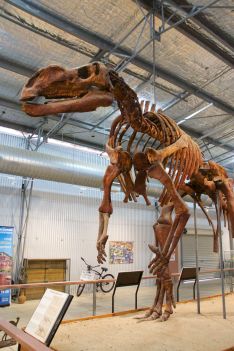 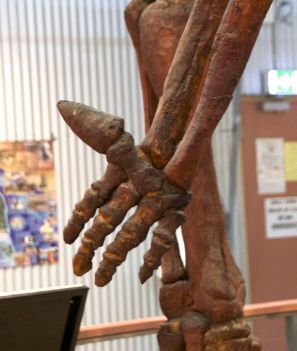 Many of the fossils found in the Hughenden fossils fields have be Belemnites and Ammonites. The Ammonites could grow up to three metres across and could weigh up to 300kg. The Ammonites would float in the water searching for prey with their tentacles. The town once sat on the shoreline of the inland sea. The fossils have been preserved in the muddy shallow of that ancient shoreline. The Belemnites and Ammonites disappeared around the same time as the dinosaurs. 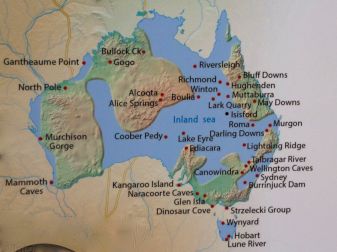 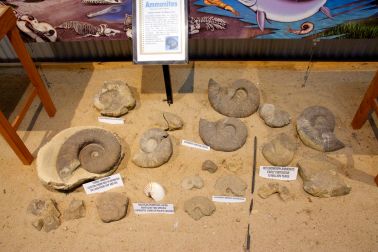 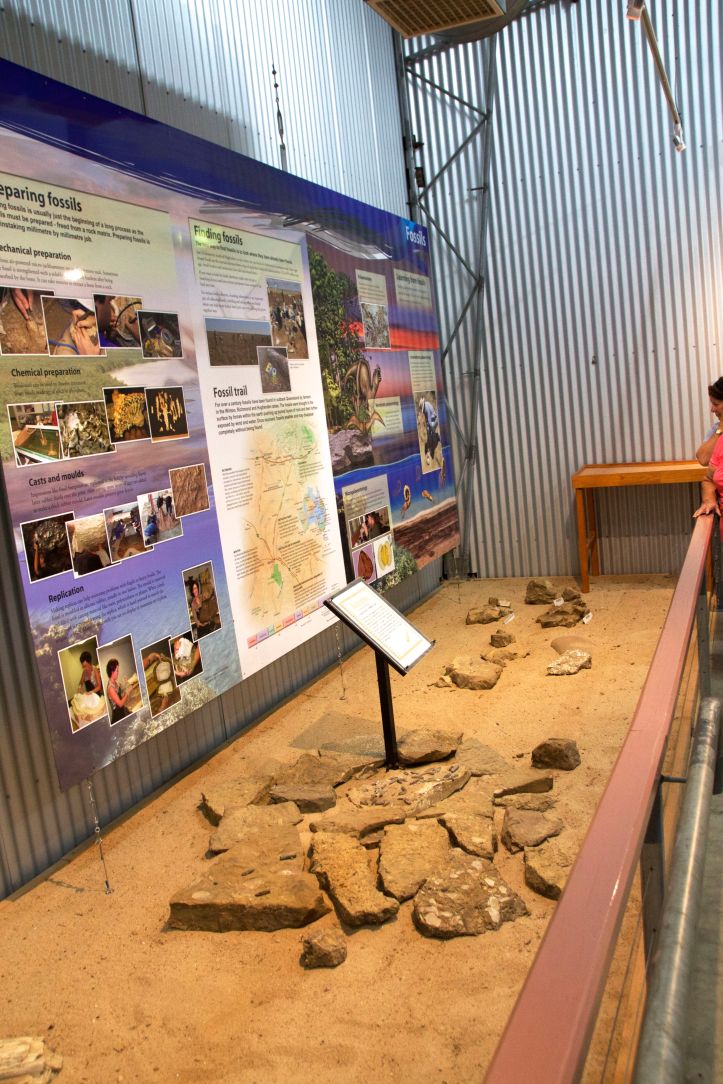 After the discovery centre we met Mutt. Mutt is a replica of the Muttaburrasaurus which stands watch over the town. The museum of Tropical Queensland donated him to the town as recognition of the numerous dinosaur fossils taken from the area. 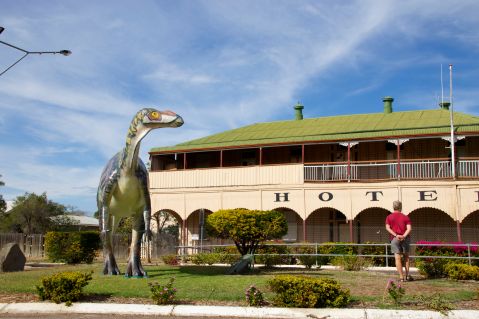 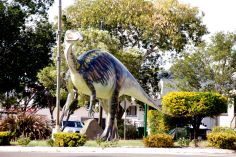 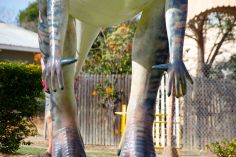 Love those hands. He could almost be dancing.

After meeting Mutt we walked around the town. Hughenden has a lovely collection of dinosaur sculptures. We just had to find them.

There were three on the top of the discover centre. Easily found. Then there is one called Darby, on the wall of the public library. (Most of Darby came from the local dump and she was put in place in 1998.) Then there was the Pterosaur. You had to look up to see that one. 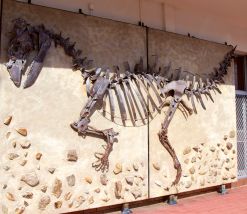 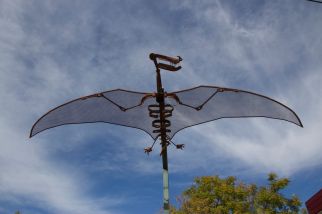 The main street holds the largest of the sculptures. I hadn’t realized it was part of the set until I read the information. The artist has used the blades from a windmill. It is shell like and designed to look like an ammonite. 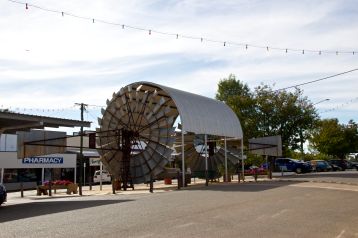 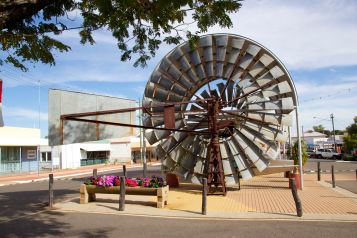 The windmill structure is also a tribute to the early pioneers and how important water was to the new settlers. (Windmills were first used in Persia before the 10th century.) In 1879 Sidney Williams designed the Comet windmill. The largest, stands on a tower of 21.33 m (70ft) with a diameter of 10.67 (35ft) for the blades. The Comet windmill proved to be very popular in Queensland. They only needed one rotation of the wheel to produce one pump stroke and would work in a slight breeze. (They have only three moving parts, the driveshaft, connecting rod and crosshead. There is very little maintenance required. The windmill works when the wind rotates the sails and turns the head, which in turn causes the shaft to rise and fall and pump the water to the surface.   The farmers and town people take advantage of the Great Artesian Basin. A Comet windmill stands in the local park. We took a walk down to the park to have a look. 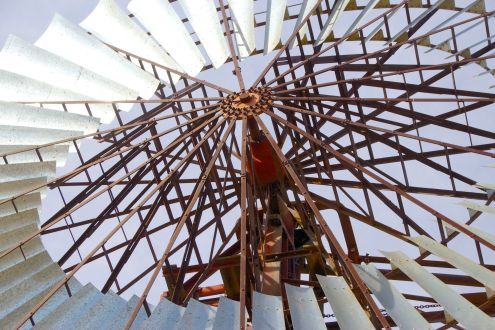 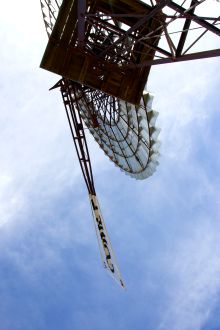 It is a big piece of machinery. With an average wind the mill could pump over a million litres (220,000 gallons) of water per day. It was working when we were there. We could hear the wind forcing the blades to turn. The driveshaft moved up and down, (well I think it was the drive shaft) making the frame shudder with every pump. You could almost feel the power of the machinery working. It was impressive. 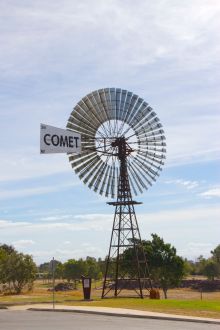 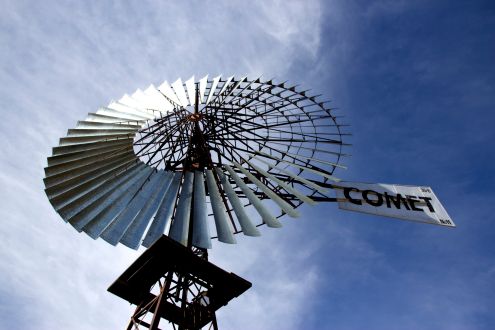 Just down from the van park, in a vacant block of land sits two plaques. One is dedicated to William Landsborough. He was out looking for Burke and Wills and named some of the creek and mountain in the area. The second plaque is dedicated to Frederick Walker. He was the leader of the search party William was a part off. He named some mountains as well. He made notes saying the grasslands in the area were the best in Australia. While he was in the area he blazed a tree (on 23 October 1861.) The tree had been fenced off and you really can’t see the carving very well. I took a look all the way round the tree but then read the plaque. The original blaze tree was approximately 2kms downstream. Don’t bother going looking for it as it was destroyed by fire in 1944. 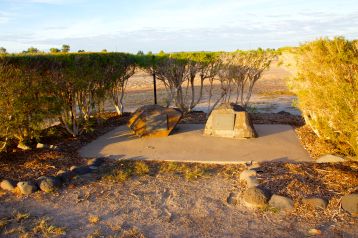 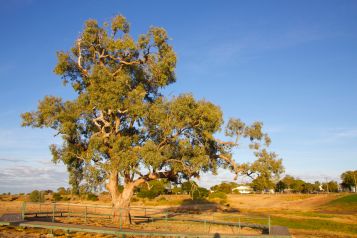