We pulled into the Railway RV campgrounds where we had stayed before. We had been told it was busy and it was. When we pulled in there were two vans already waiting before us. We all had to wait until people left so we could take their spots. It wasn’t long only about half an hour. The spot we were given was a little bit small for us but we weren’t going to complain. We could have had a bigger spot but that would have been in the non-powered section.   With this spot we had to park the car next to the van making it impossible to have our awning out. It had been drizzling for most of the morning and it would have been nice to open the awning up to get some air flow through it. We had chosen a powered site, as with all the dark clouds we didn’t think we would be able to charge up our batteries.

We started to connect everything up. While Adrian was connecting the power I was connecting the water. Alert, alert. The tap faucet came off in my hand. Water gushed out everywhere. Yes I tried to reconnect it. Adrian tried. No luck. We then had to try and find someone to turn off the water to our tap. Adrian quickly found the van park manager but he didn’t know where the mains were. The admin person didn’t know either. She started to make phone calls. It took about 10 minutes to learn where the mains were and we had to turn the water off for the whole park. Sorry guys. Then we waited for a plumber to arrive to fix the problem before the water could be turned back on. Thankfully he was there quickly. Job almost done. He would have to get some parts for the tap, as it was so old he didn’t have the right connection. Then there was an ‘Out of Service’ tag on the pole. 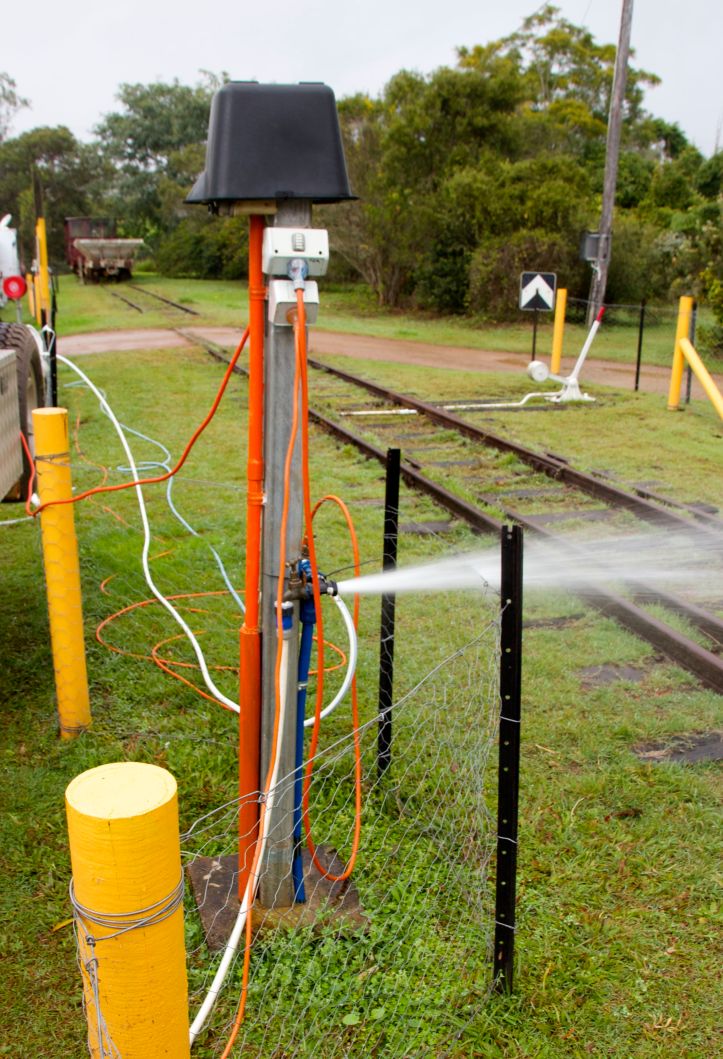 As we had been to Ravenshoe before, there was no great rush to go out and see everything. This time we took a walk though the camping area to the camp kitchen. It has a lot of curiosities. Most nights the fire pit is lit and the campers came together to swap tales. 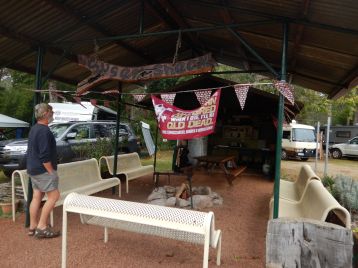 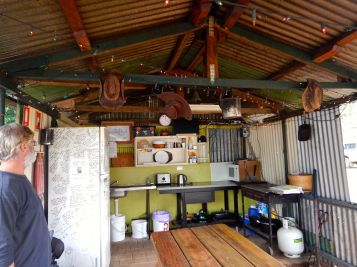 We then took a walk around the back of the van park. We hadn’t walked far before I saw some birds. Yes I just had to take a photo.

The walking track lead into a park beside the river we hadn’t seen the first time we stayed at the van park. There was a lovely picnic area with a water wheel. The undershot waterwheel (the current of the water turned the wheel,) was once used to supply water to the local timber mill. The water was pumped to a holding tank for the boiler to be used in the steam-driven machinery. 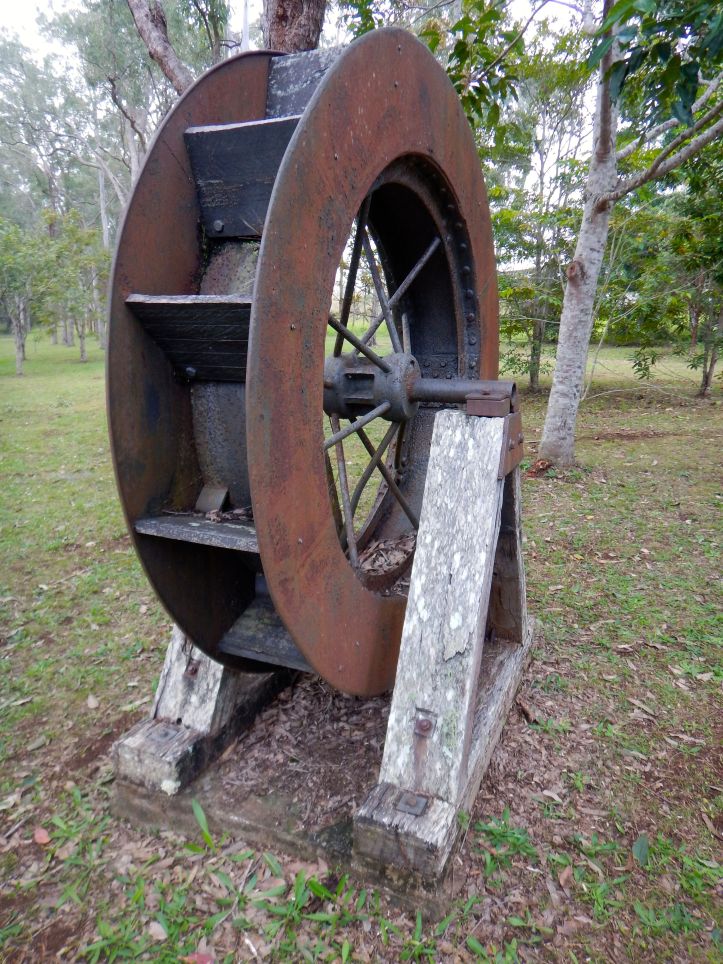 There was also a sign telling everyone where to stand to see platypuses. We became exited with the idea. The platypuses, along with the two species of the echidna, are the only mammals on earth that will lay eggs. We have both in Australia. Although they are solitary animals the platypus generally live in close proximity to each other. An interesting thing about this amazing animal is when they are foraging for food they will swim with their eyes, ears and nostrils closed. They use their electro-sensitive bill to locate and probe for food. That food is generally a range of worms, insects, crustaceans, molluscs and small vertebrates such as tadpoles or shrimps. Most of the time the platypus will forage in water but they have been known to come out of the water and look for food along the riverbanks.

When we were at the Platypus farm last year we were told to be noisy so the animals knew it was safe to come out. (An animal will be quiet if they are hunting.) The sign, on the other hand told us to be quiet and wait. Unfortunately for us it didn’t work. Even when Adrian called out pussy, pussy, pussy where are you. Still nothing. 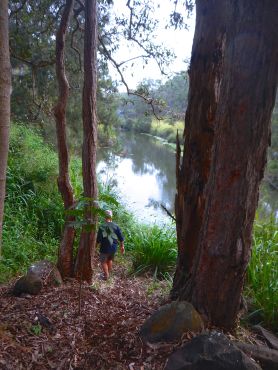 We did see an ugly duck though; well I think it was a duck.

We did take a return visit to Millstream falls. There seemed to be more water this time. I tried to take the photo with the water being an endless flow. I don’t think I have practice that since I was here last time. Need more practice. 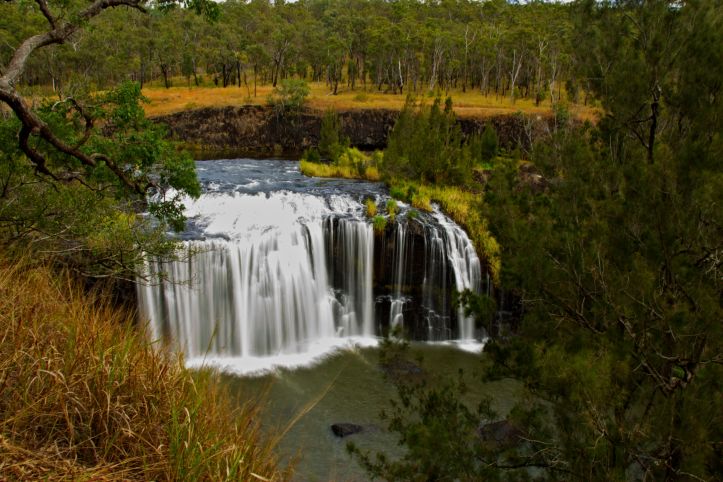 The car park was filled with geckos and kookaburras. It was just as nice to see them, as it was to see the falls. 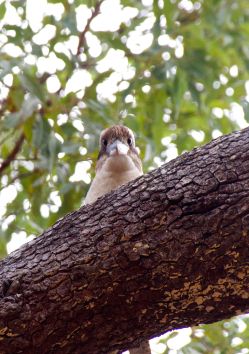 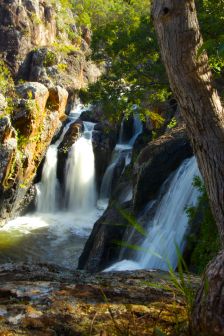 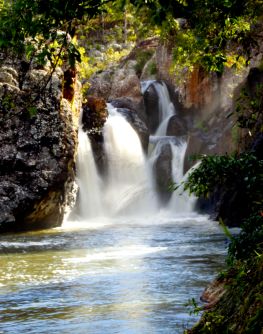