The next day was lovely, good thing too as we were to cross the river on a ferry. We were told there was no set times for departure. You just show up and when the ferry is full then it will cross, same with the return journey. 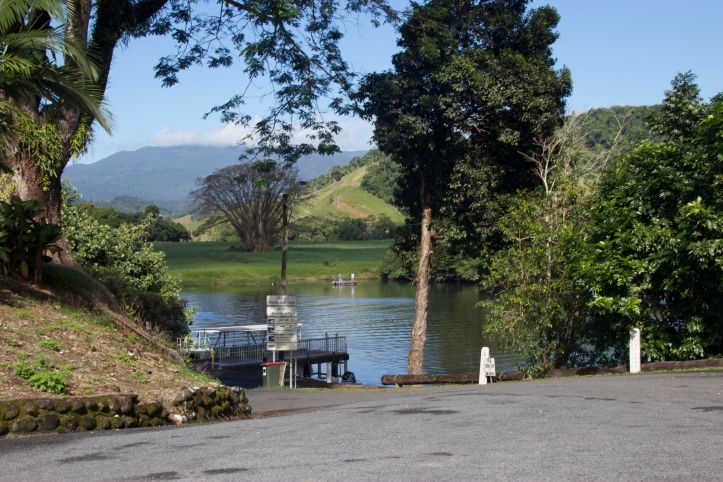 This was the first time we had taken the van on a ferry and the novelty of it made the short journey fun. It took longer to load and unload than it took to make the trip. 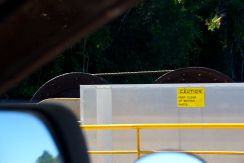 The road to the campground was windy and narrow. I stuck my camera out of my window to take some shots. I didn’t follow it with my head to make sure it was a good shot, as I didn’t want to loose it, my head that is, the road was so close to the cliff face. The sign at the ferry stop was not kidding.

The campground we were going to stay at wasn’t very well sign posted so of course we missed our turn off. We had slowed down when our GPS system said we were there but didn’t see any sign so we continued on. Big, big mistake. There was nowhere to turn the van around on the narrow road so we travelled on and on. The bitumen turned in to wet slippery gravel. I was beginning to panic when Adrian pulled over in what could be a single parking spot on the side of the road. Maybe we would have enough room to turn? I jumped out of the car to be a spotter when a car came along. I stopped them and asked if they were local. They were, great, so I asked if there anywhere we could turn round ahead. Yes, about 10 minutes up the road at the river crossing. I was so relieved. After the events of the jack-knifing the day before I think I was still a little shaken and the trip on the slippery gravel didn’t help.

We made it to the river and yes there was enough room to turn around. We had to ask for someone to move their car first but we finally managed it. I stood back and let the men direct Adrian, poor dear there was two of them both giving direction at the same time. One of the wife’s asked me “Your not taking the van across the river are you?” “No, that was not our idea.” On the other side of the river it is 4WD only. It will take you all the way up to Cooktown and it is not a wise move to take a van on it. Not even a small one. We would have had no hope with ours. I had visions of us leaving it along the way in a heap. 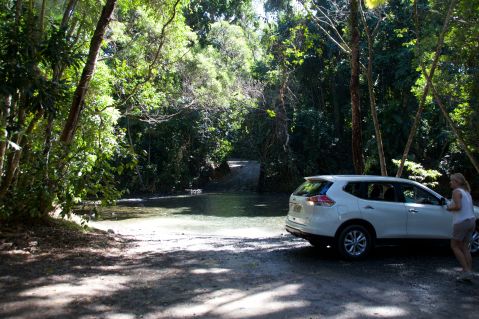 Driving back to try to find the campground I made it clear to Adrian I was not happy. The road was rough, wet and slippery in places. Going up and down hills and weaving round the side of the hill was not my idea of fun. The whole thing had put me on edge. Adrian thinks I am a big sook; he just laughed at me and wanted to know where my sense of adventure was. Clearly I don’t have one.

We found the campground right where the GPS system told us it was. There was a big sign for a van park along the same road and the sign for the green park we were staying at was about the size of a small bread and butter plate off to the side. No wonder we missed it. We later found out the owners of the green park also own the van park and while the green park only charges $10 a night for a fully contained van the park charges $34 for unpowered and $44 for powered, for a site. I can understand why they don’t want to advertise the green park.

The green park only offered an area to park the van and that was it. There weren’t even any rubbish bins, we would have to take everything with us when we leave, but for us an area to park up is all we need.   Why pay for something we wouldn’t use? One of the great things about the Green Camp was a that a cassowary walks though the camp every now and again. We didn’t know this until we had arrived, bonus. We were told he was there in the morning and we had missed him by two hours. There was a list on the shed wall letting everyone know when he had last passed through the park and a gong on the caretaker’s bus for when he was in the park. He may be back before you leave we were told. Great. I had seen a cassowary when we had stayed at Mission Beach but Adrian had yet to see one. 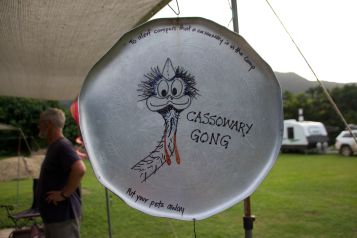 The camp wasn’t that far from the sea and after we set up we went for a walk. We came out of the forest to the edge of a cove. Wow, all the hassles of the day seem to melt away. 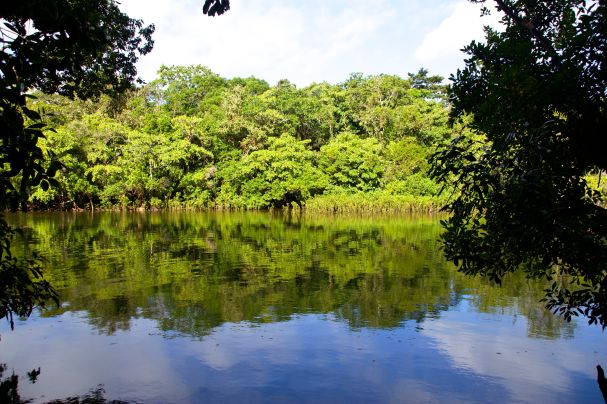 We continued on to find ourselves on the beach. The sand crabs were out in force leaving behind their signature sand balls. Scurrying across the sand with each step we took as we made our way up the beach. What a great way to end the day. 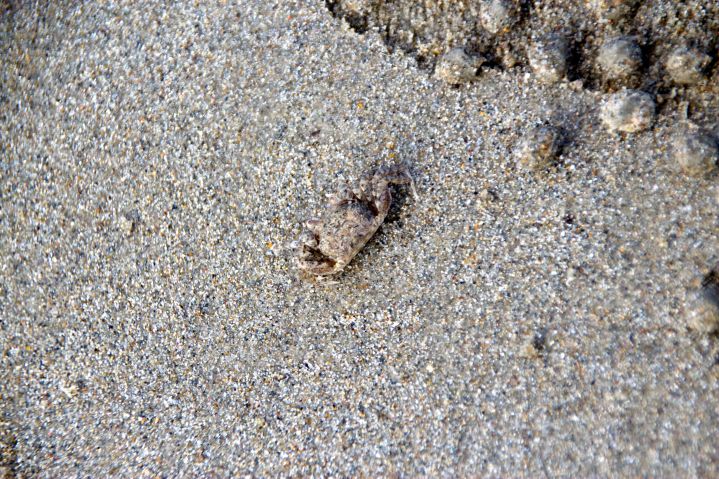