The next day after a good night seel I decided the Daintree is a lovely place to be. The forest offers some long walkways weaving though the trees. Each section was slightly different. Some areas are rainforest others are freshwater swamps and of cause there are the mangroves. Most of the walks are close to the beach so after walking thought the dark tropical forest you could come out into the sunshine and the sand. Amazing. 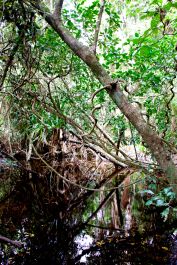 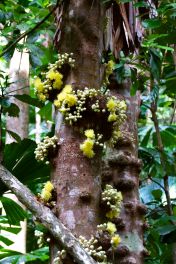 On one day we had lunch at a cafe selling a “taste of Australia”. The café has a sense of hummer offering a “Roadkill Burger”. The burger brings the flavour of wild boar with a touch of goanna and a hint of cassowary with maybe an overtone of snake or so the sign said. It did cross our minds to try one but we settled for the “3 burger” lunch instead.   It consists of a roo, croc and an emu burger. Adrian and I shared it; I love to taste these types of things so sharing is great way for me to taste more. I was a little disappointed in the chips though; they were made from breadfruit and didn’t really taste of much. 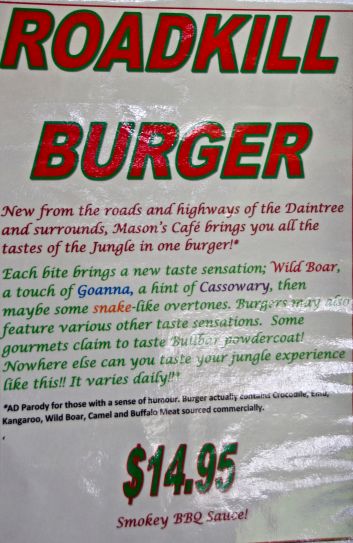 After lunch we took a walk down to the river next to the café, as the café offers a river swimming spot. Nice. Several people were swimming in the clear water. I guess they had read the sign back at the café.  The area does have croc and it is a good idea to pay head to the warning signs. Even in what look like clear water the crocs can be an unseen killer. 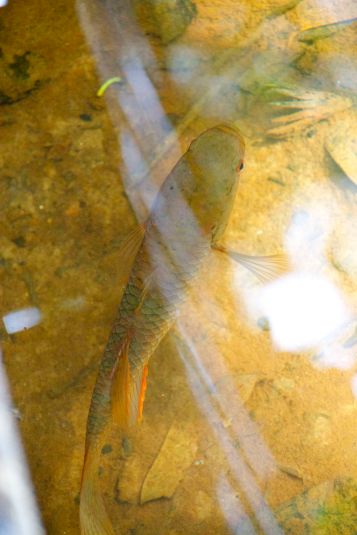 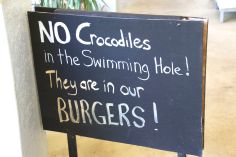 We didn’t do all the walks but we loved the ones we did. The Daintree National Park is part of a Wet Tropics World Heritage Area. It is considered to be a living record of the evolution of Australia’s plants and animals and represent one of the world’s oldest living rainforests. The cape is where the tropical rainforest meets the Great Barrier Reef.

One of the walks took us along the beach at Cow Bay. We found a sick looking cane toad. Adrian and I talked about killing it.   They are a big problem in Australia. They were introduced to our shores to eat the cane beetles that, at the time were devastating the sugarcane crops but the toads didn’t take an interest in the beetles, instead they started to kill our native wild life. We did wonder what to use as we were on a beach. We could have picked up a piece of driftwood to give the toad a wack but I don’t know if the tourists would have realised we were killing a pest and not a poor living creature and we didn’t know if we could kill it in one quick wack. We left it there. Boy, are they ugly. 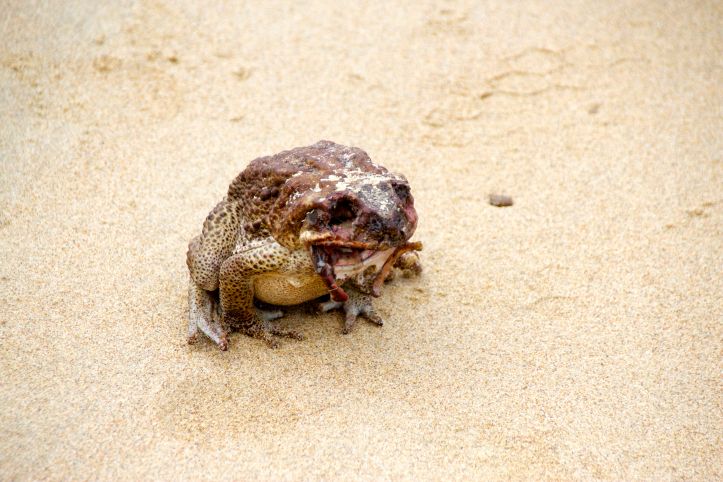 I really was blown away with the Daintree. It is a special place. Everywhere you looked there was something different to see. 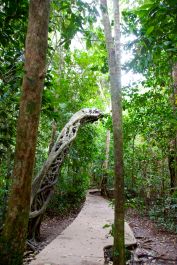 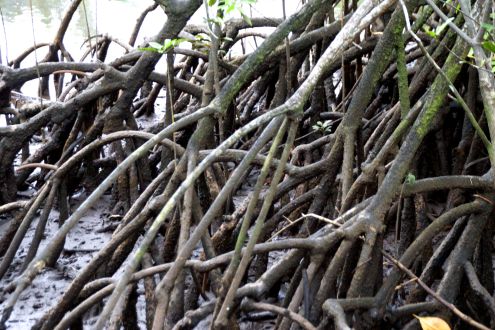 The only thing I didn’t like about the area was there was generally no phone reception.  We had been told you could get coverage next to a fruit store but we weren’t told where the fruit store was. Odd stores were scatted along the roads. No we didn’t stop at each one to check for a signal. We had heard a lot about the fruit stalls but when we went looking for them there didn’t seem to be anything on the shelfs except old coconuts. Some had been there so long they were sprouting. I guess like usual for us it isn’t the right time of year.

We decided to stay an extra day. Good decision. The Cassowary hadn’t shown his face and we had given up waiting for him to stroll though the camp. You guessed it on that extra day we stayed in he wanders. The funny thing was Adrian had decided to go for one last walk down to the beach.   He had only been gone for about 10 minutes when I heard the gong being rung. I grabbed my camera and ran outside. 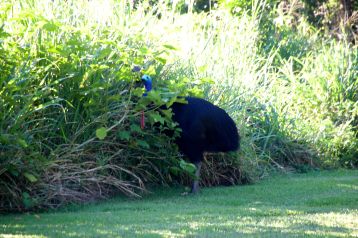 The Cassowary is the third tallest and the second heaviest bird in the world. They are tipped only by the ostrich and emu. The male can reach up to 1.8m (5.9ft) tall. They have three toes with the middle toe sporting a dagger like claw. They can be very dangerous to people so I didn’t want to get too close. The cassowary can reach up to a speed of 50ks (31mph) and can jump up to 1.5m (4.9ft.) That is not all these birds can do they can also swim. Astounding. 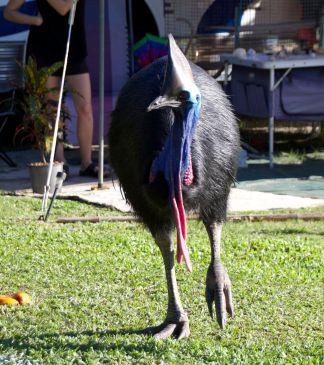 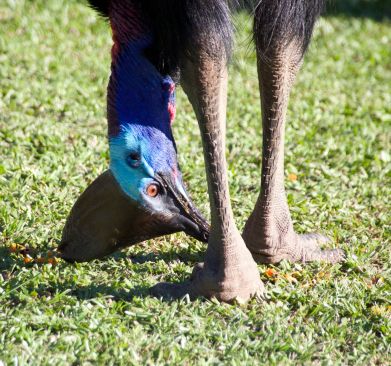 The casque on the birds head grow with age and the scientist aren’t too sure what its purpose is. It had been suggested that the casque amplifies the deep sounds the birds make.   Or, as the birds spend a lot of time under bushes looking for seeds the casque could protect the head from falling fruit by deflection. 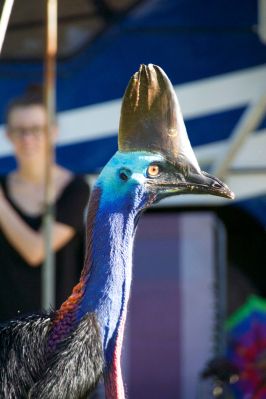 The loss of their rainforest habitat has hit the cassowary numbers hard. In February of 2011 Cyclone Yasi destroyed a large area of the cassowary habitat. Around 10% of the Australian birds were killed. It is thought that now only about 20 to 25% of their habitat remains and as the cassowary does not cohabit very well and they do not often breed in zoos it will be a tricky situation to help bring the numbers back. The birds can live up to 50 years and their biggest killer is man. In any given year accidents accounts for about 55% of the deaths.

They are an amazing animal. Poor Adrian he was not happy to arrive back in camp to find out he had missed the cassowary. 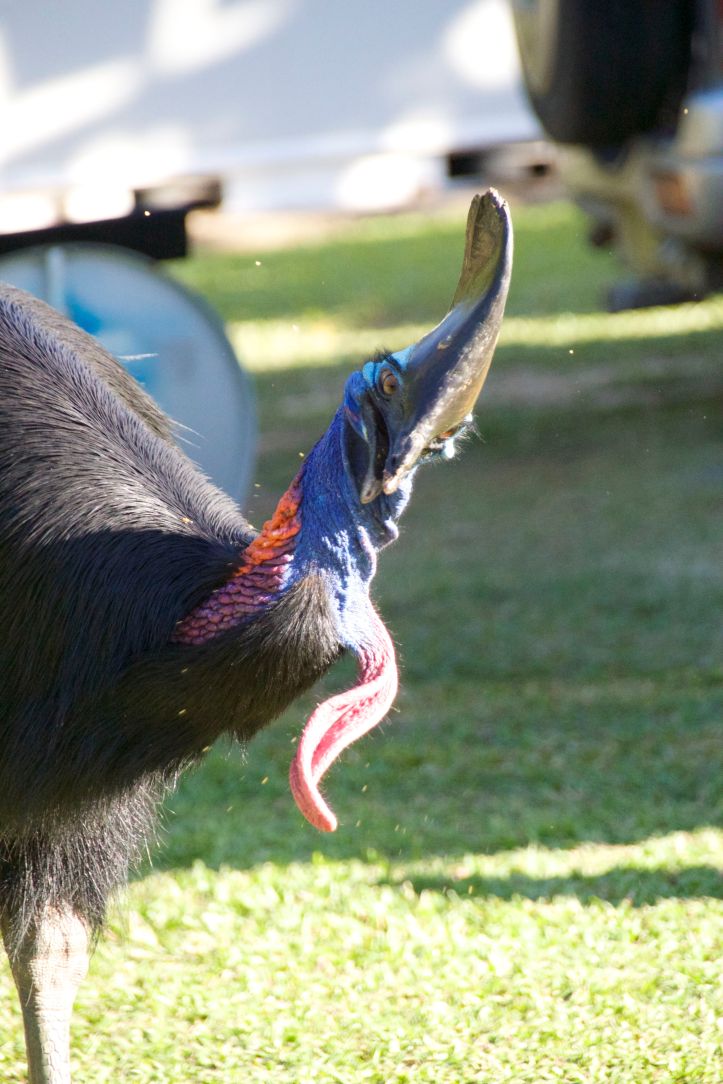 In the late afternoon the caretaker told us to get to the ferry early the next morning. He kindly had checked the tide times and as our van is long he advised us to arrive at the crossing early to take advantage of the full tide. (We may not be able to board the ferry on low tide.) It was a bit of a shock to the system to get up early and be on our way. We didn’t have any problem with the crossing but it wasn’t as much fun as it was the first time.

Good news for Adrian is that as we were driving to the ferry we saw a cassowary on our way. Adrian was happy.