After absorbing so much information about Ned it was only right we moved on to the Courthouse. Most of the rooms of the courthouse are open and offer a different aspect of the history of the building. Beechworth became the capital of North East Victoria after gold was discovered and the resulting boom period that followed. A Circuit Court was established first and was held every three months. The courthouse was built in 1858. On the first two days of opening 21 cases were heard. By 1862 five different courts were being held in the building.

The first area offered a history of judges. I read the history of each judge trying to find if any of them had Ned in their court but didn’t find a connection but I guess the information gave the judge’s individual story and not what happened in the courtroom. 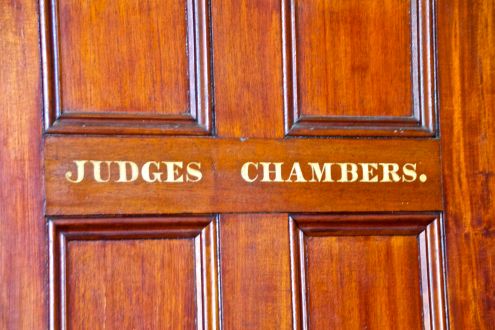 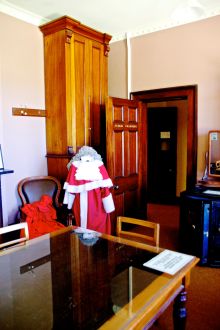 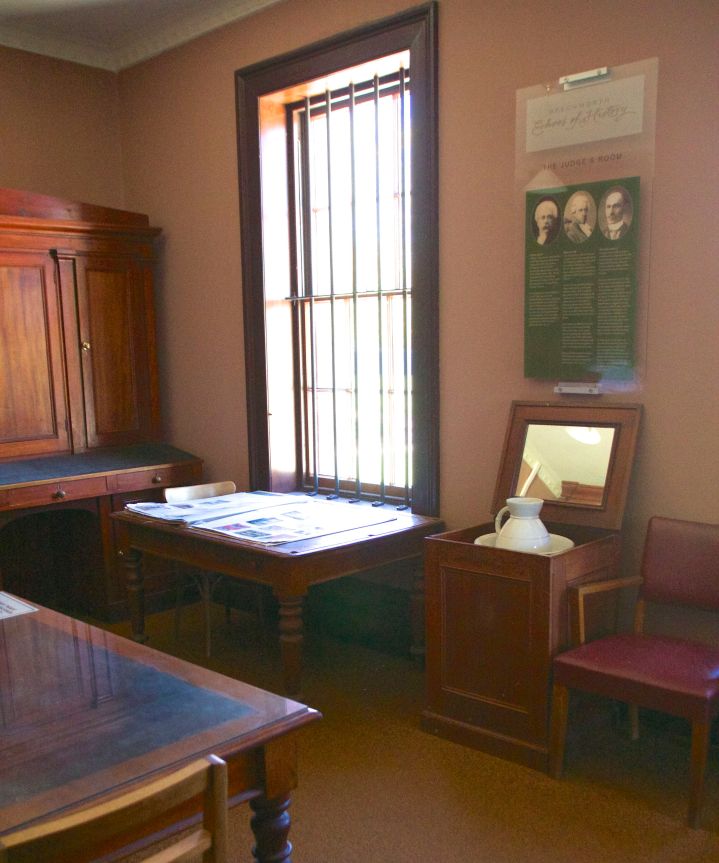 Ned did appeared in the courtroom. It is also where his mother Ellen, Harry Power and Elizabeth Scott saw the heavy hand of the law. (Elizabeth Scott was the first woman to be hanged in Victoria in 1863 for the murder of her husband although she claimed her innocence until the end. She was just 23)

In a corner of one of the rooms, was an old wheelchair belonging to Ellen Kelly. Ellen saw seven of her children go to their graves and even outlived many of her grand children. She was in jail when Ned was hanged. The story goes she was allowed to see her son the night before he was to be hanged where she told him to “die like a Kelly son.” Ellen was serving a three year hard labour sentence for the Constable Fitzpatrick incident. She was charged with attempted murder after hitting Fitzpatrick with a fire shovel after he made unwanted advances to her daughter Kate. The photo of Ellen was taken in 1922; she died the following year aged 91. 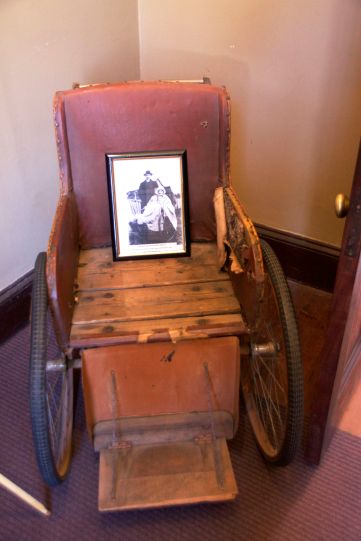 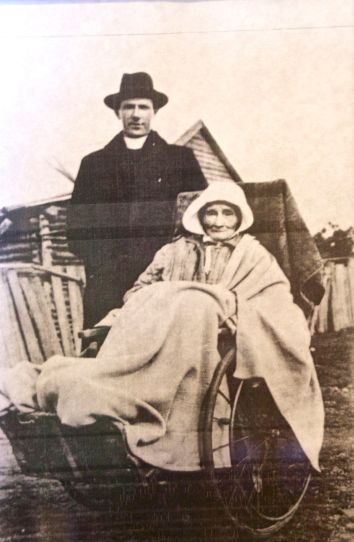 The courthouse has several display cased with items used by the police around the Kelly time.

In another room sits a copy of Ned’s armour. It was made in 1960 at the request of the curator of the Burke Museum. I find it interesting that all the copies of the armour we have seen have been made with the bullet holes and the dents. We haven’t seen a copy of what the armour would have looked like brand new.

We moved into the courtroom. 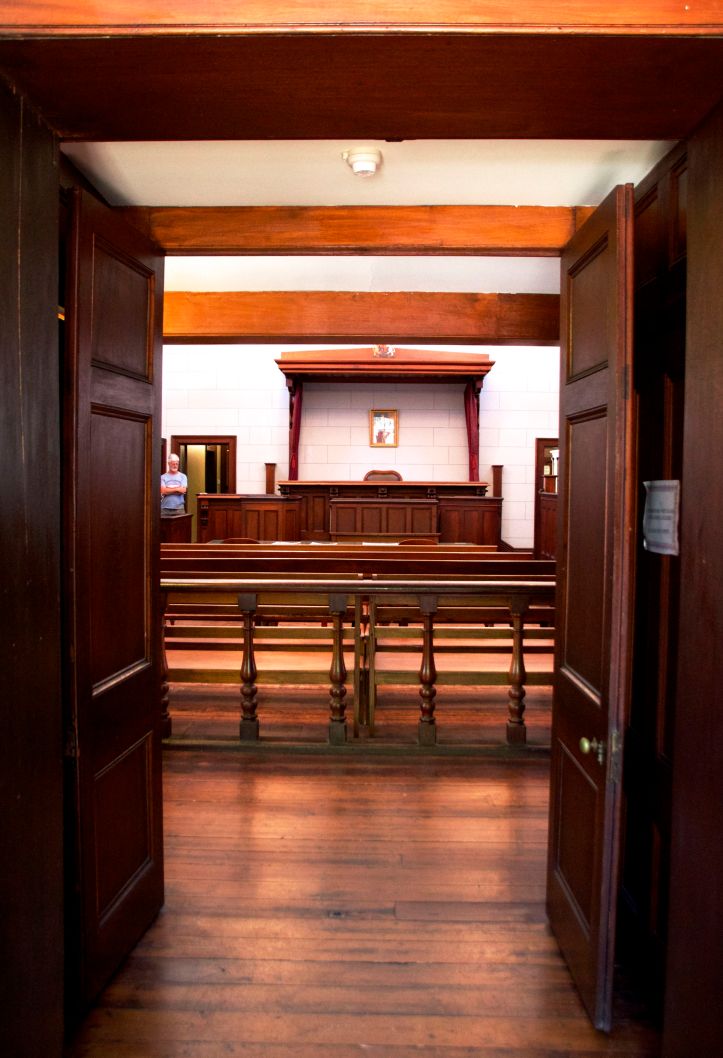 Of course I had to get a photo of Adrian in the docks where Ned Kelly once stood. At the time of his trial Ned was still suffering from the wounds he suffered at his capture. Ned was wounded 28 times and he suffered several cuts and bruises as the result of bullets and shotgun blasts which hit his armour. He was taken to Melbourne but returned to Beechworth to stand trial for the killing of three policemen at Stringybark Creek on August 3rd just 36 days after the siege at Glenrowan. The trial started on the 6th and as you can imagine the courtroom was packed the moment the doors were opened. Ned was committed over to the Supreme Court on the 11th August. He was sent back to Melbourne where Sir Redmond Barry sentenced him to hang and on November 11 1880 the sentence was carried out. 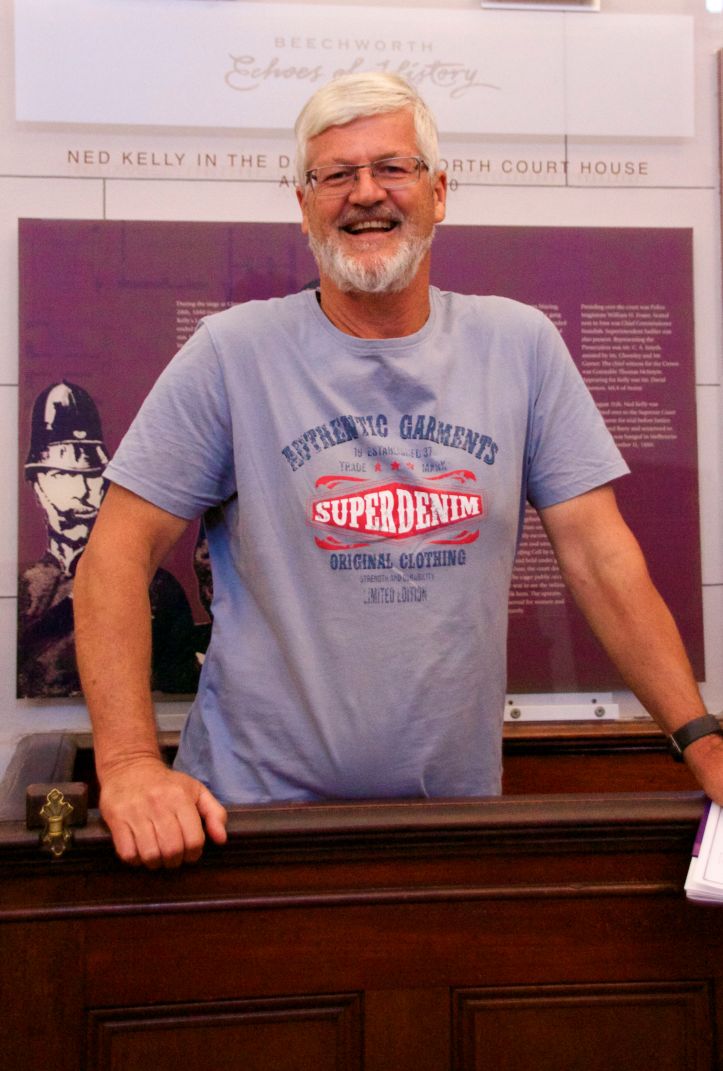 We made our way into the holding cells one for the men and one for the women. Information boards covered walls of the small rooms. I thought Ned’s trial was done very quickly as it was a mere 137 days from his last stand to him being hung. The information boards informed me this was a long time between capture, trial and hanging. For the time, a typical trial even if it was for murder, could be over in an hour. (The accused was not allowed to speak in their own defence until 1880) The juries could hand down their verdict in minutes and if you were sentence to death it could be all over in as little as a fortnight. (I guess you need time to get the hangman.) There was no real appeal system. A petition with references from family, friends and anyone else you could get to say nice things about you were presented to the governor of the Colony. Premier and Cabinet would then make the final decision.

Twelve men and one woman (Elizabeth Scott) were sentenced to hang at the Beechworth court House.

After the Committal Hearing of Ned Kelly the crime rate dropped in the area and the courthouse became less important. It was closed in 1989 and in June of 1991 became a tourist attraction.

We took a quick look at the stone lock-up building out the back of the courtroom. The building was built in 1867 for £695 for the two cells. One for women and you guessed it the other for the men. Interesting they were both the same size. Both Ned and his mother were guests, Ned in 1871 and his mother in 1878. 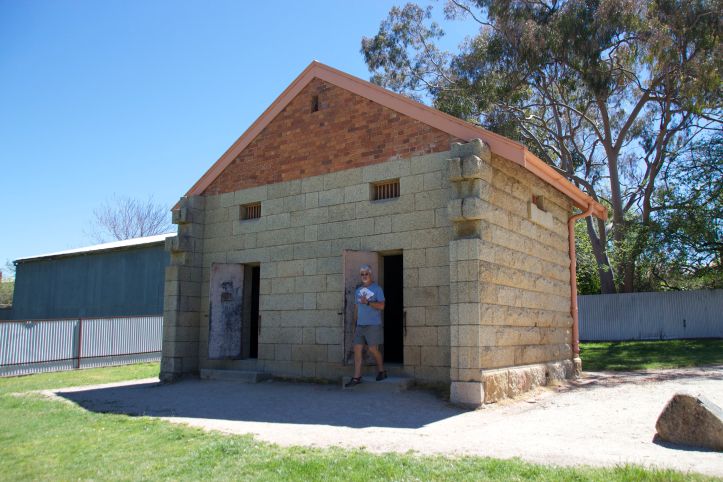 After walking around the cell we called it a day and headed back to our van. It was still early so we sat outside and enjoyed the afternoon sun.