We side-tracked to go to Jerilderie. After spending so much time at Beechworth it was a given we would end up at Jerilderie as it has a connection with Ned Kelly. We found the bush camp after a scenic tour of the town. That is a nice way of saying we went the wrong way first. The camp was in walking distance to everything so after setting up and having breakfast along with our cup of tea we trotted off to look at everything. It was still early and most of the shops were still closed. We then remembered it was Saturday and most of the shops would be staying closed until Monday.

The town is set out with all things Ned and we started at the post office. Why the post office? It was the first building we saw as we walked into the town. I was surprised with how small it was. When Ned was planning to rob the bank he didn’t want the news of his whereabouts getting out to the police so he closed down the Telegraph system. He even went as far as getting some of the townsmen to chop down the telegraph poles leaving away from the town making it harder to repair communication to the outside world. After the Gang had left the town the Postmaster was not fazed. He simply used a fence to run the telegraph wire along and connected everything up so by nightfall he was sending out information again.

Why were the Kelly gang planning to rob the bank in Jerilderie, which is 169 ks from Beechworth? After robbing the bank at Euroa the security for the local banks was increased, forcing the men to look further afield. At the time Jerilderie was a prosperous wool growing area so it would naturally be a good target. 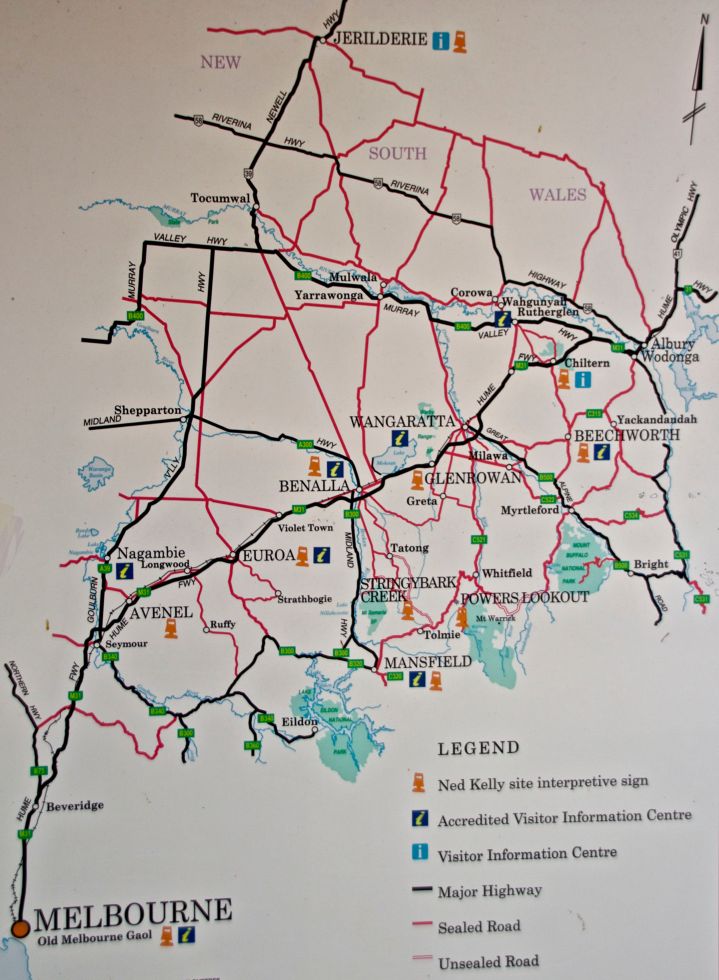 The men arrived at midnight on a Saturday and went straight to the police barracks. They locked up the two policemen that were there and used the barracks as a base while they waited for the bank to open on the Monday.

They didn’t stay hidden away in the barrack all weekend. The men went for walks masquerading as reinforcements sent to the town to strengthen police forces along the border protecting the town from the Kelly Gang.

On the Monday, dressed as police they entered the bank to rob it of £2141. There was only £691 in the teller draw as most of the money was in the safe, which required two keys to open it. The bank manager who was across the road having a bath at the time was escorted to the bank so he could open the safe. Ned had all the loans and mortgage documents for the town’s people burned that were held in the safe. Unfortunately for the people the bank kept copy of everything in the Sydney head office.

Throughout the day the Kelly gang collected 60 odd people who had entered the bank or into the yard of the hotel next door. They were all escorted to the Royal Hotel where it is said Ned put money across the bar and shouted them all drinks. (Ned made a point of not hurting civilian hostage and if any were hurt it was by the police.) It seemed the robbery was a very relaxed affair. Joe and Dan, dressed as policemen and even had time to go to the town Blacksmith in the morning to get new shoes for their horses. They told the blacksmith to send the bill to the New South Wales Police. (I don’t know if it was ever paid.) 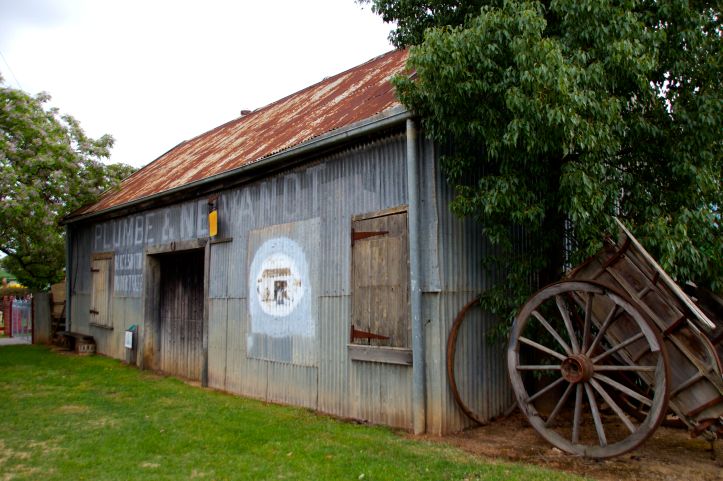 The town is where the “Jerilderie Letter” first made an appearance. Ned dictated the letter to Joe Byrne in the Royal Hotel although it is thought Ned had made notes about what he wanted to say and Joe rewrote it to make it neater. The letter was not the first time Ned had written to the authorities. He was well known for his letters, calling for a better system in Australia without being dictated to by the British two class system. The idea was to have the local newspaper publish it but the editor of the town’s paper could not be found. Instead while the Kelly Gang was robbing the bank, the letter was handed to the bank accountant with the warning “Mind you get it printed, or you’ll have me to reckon with next time we meet.” 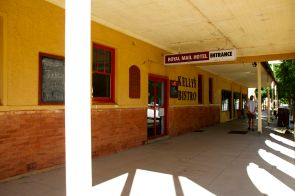 The letter is just over 8,000 words and is thought to be one of two original letters that have survived written by Ned. The letter was not published in full until 1930 but a summary of its contents was published while Kelly was still alive. It had been Ned’s wish to have the letter printed as a pamphlet so it could be available to the general public. This never happened as the police advised against it fearing it may increase sympathy for the Kelly Gang. It was also thought some of the language was unsuitable to be public. The letter was used in Kelly’s trial as it was seen as a confession. (After the trial the letter was handed back to the bank accountant.)

The letter has been published and can be found on Amazon Kindle for free.

What is written in the letter? Ned calls himself “a widow’s outlawed son” and tries to tell his side of the story to explain why he took the actions he took, claiming he was forced into becoming a criminal due to the police persecution of himself and his family. He claims many of the charges against him were false. It has been said the letter “fervently articulates his pleas of innocence and desire for justice for both his family and the poor Irish selectors of Victoria and North-east.” He tries to justify the killing of the three policemen at Stringybark Creek as being self-defence. “This cannot be wilful murder for I was compelled to shoot them, or lie down and let them shoot me.” There is a great dislike for the police in the letter and he calls on corrupt police to resign.

There was a lot of sympathy for the outlaws. It was suggested in one of the local papers of the time that eight hundred men were ready to take up arms and to support the Kelly gang.   The story goes that the first tracker the police used to find the Kelly gang was sympathetic to the cause and lead the police around in circles. Another story goes that the tracker just didn’t want to be caught in a shootout. I like the first story better but it was more than likely as the police was being paid double time with increased hours they didn’t really have a great desire to capture the gang. Anyway things had to move on and the police hired a tracker from Queensland to help find Ned.

When the gang were finally captured and taken to Melbourne it was reported close to eight thousand people had a mass meeting to demand a pardon for the Kelly gang. Tensions between the supporters and the authorities remained high for many years after the death of Ned.

We walked on to the Traveller’s Rest Hotel. At one time The Traveller’s Rest not only served as a hotel but as a general store and a coach strop for travellers going from Deniliquin and Wagga Wagga. The Traveller’s Rest Hotel is where Ned and Steve had farewell drinks with some of the town people. The Gang left shortly after heading to the Murray River. A thunderstorm had been biding it’s time and when it was right, washed away their tracks. (Ned was later captured at Glenrowan on 28 June 1880 and hung on 11 November the same year.) 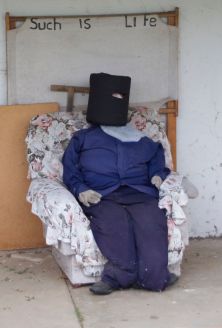 We called it a day and headed back to our camp. We walked back through the Bush Tucker Trail. Native eatable plants had been planted along the pathway along with some being used for medicinal purposes. It was a lovely walk back to the van as the trail ran beside the river.

The next day we had a lazy morning before we took the same walk back to the town. We had lunch at a small café with a Ned statue made out of baking tins.

After lunch as we were walking back to the van we spotted a home garden that was open so of cause we wandered in. We started to talk to the owner and he told us that the house was once the bank manager’s house. He explained how one of Ned’s men came for the manager while he was taking a bath so the gang could continue robbing the bank. I would have loved to have seen inside the house but that wasn’t open to the general public. We were told the house is still pretty much the same as it was when it was built for the bank manager. We were told that it even still has a large safe in one of the rooms. 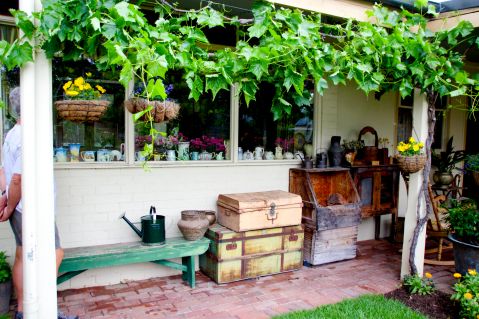 The owner loved opening his garden to tourists and did it most weekends. I could understand why as it was lovely. The fragrance coming from the roses and other flowers was amazing. Most gardens don’t seem to have an aroma anymore. 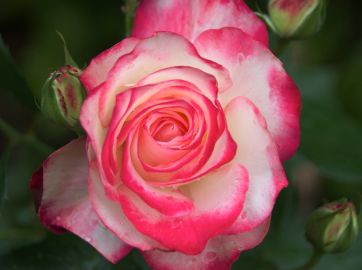 As we left the owner gave me two of his roses to take with me. The van was filled with the sweet smell of roses for the next two days. I loved it.