We parked up at a bush camp in Koondrook.  The photo of the camp showed the area to be lovely and green but for us the grass was dry and brown.  We decided to say only for two nights.  After unhooking the van we drove into town and then through it across the state border to Barham to find the tourist centre.

Koondrook and Barham are located either side of the Murray River and if you didn’t know you would think they were one town.

We couldn’t find what we were looking for, so after a quick talk to a lady in a shop we learnt neither town had a dedicated tourist centre.  However, Barham did have a local newsagent with some pamphlets for the area so off we went. While we were looking at pamphlets for the area, the shop assistant at the newsagents asked us where we were staying. After hearing we had parked up at the RV camp in Koondrook she told us how to get out to Gunbower Island bush camp. She finished her instructions with “It is so much nicer there.”

After having a quick look around the towns we followed her directions to the campsite.  The road led along the river, and had little pockets of cleared area where a van could park up.  The young lady was right it was “so much nicer.”  We picked out a spot and went to get the van.  You guessed it by the time we arrived back out lovely spot had already been taken.  As there was enough room for more than one van, we could have been mean and moved in to share but decided against that.  While caravaners are friendly we don’t always want someone on our doorstep.

We eventually found a new spot further up the river and set up camp. 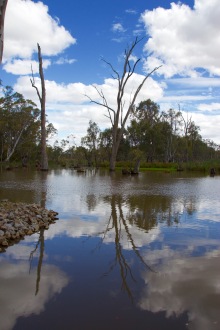 We pulled the canoe from the top of the car with a great plan for it to taste water again.  The wind picked up and it looked miserable for a while.  Adrian eventually braved the weather but I stayed dry.  Gunbower Island is a great place to have a paddle, as there is a bird sanctuary on the island.  The island is 26,000 hectares with all bar 1,200 being forest.  The 1,200 hectares are made up of waterways and marshes. 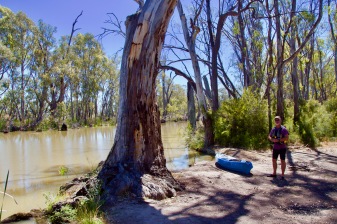 The forest and waterways offer a home to 260 different species of birds and animals.  While Adrian was out paddling some of them came to visit.  Although not all of them were pretty. 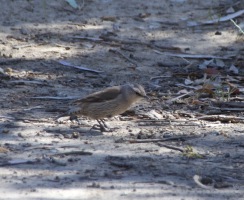 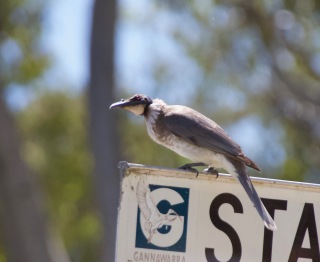 The next day saw us exploring both towns.

There is a lovely old horse trough in Barham.  A man name George Bills who had moved to Australia in his youth set up (along with his brother) the BBB Innerspring Mattress Company in Sydney.  When George died in 1927, his will specified the income from his estate would go to providing troughs for horses and to help stop cruelty to animals.  More that 700 troughs are throughout Australia and 50 in other countries. Mostly in Victoria and NSW. (The RSPCA now look after the Bills Trust.)

As Koondrook and Barham sit on both sides of the Murray River, both towns boast a bridge of historical significance.  The Bridge was first opened in 1904 and is now one of the oldest remaining bridges to cross the Murray River with a lift span, which is still in use.  Although not at the moment as it is undergoing some restoration work.   We did get to walk across it.  School children had painted the safety barriers to add some interest. 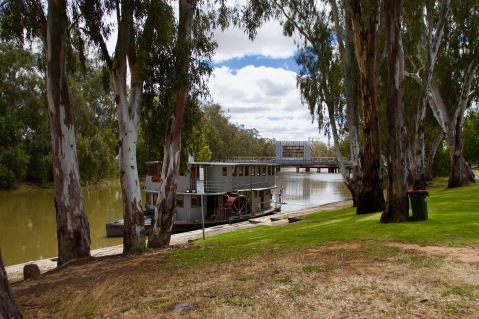 The bridge was operated by two men turning wheels to raise or lower the lift span right up until 1997 when it then was automated. 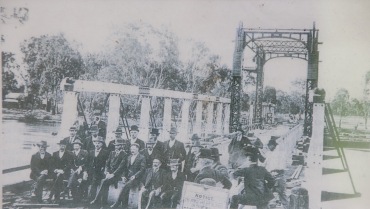 Woodcarvings line the river with their own little shade shelters.  Most are on the Koondrook side.  Each carving reflects on the history of the area and depicts wildlife and local people. What I found impressive was most of the sculptures made from local Redgum, have been made using a chainsaw.  Yep I took lots of photos of each one we saw.  Amazing work. 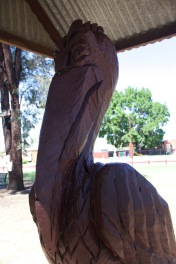 We took several walks along the river and just relaxed.  Our two days stay turned into 4 and if we had time with us we would have stayed longer.