Instead of staying the night at Hyden we drove up from Kulin for the day. I used to live in Hyden about 30 years ago so I was interested in see how it has changed. The biggest change wasn’t the town itself but WaveRock. Now you have to pay to walk the rock. There is a tourist shop, coffee shop with a lace museum and a toy museum. Of course you have to pay to go see both, not a lot but that are two entrance fees. We had coffee in the cafe. I wasn’t very impressed. They had dried wild flowers hanging from the roof. It may have been nice when it was first done but now every thing was colourless. I sat there looking up and started to count the spider webs and hoped nothing dropped down on me. (Am I being over critical?) 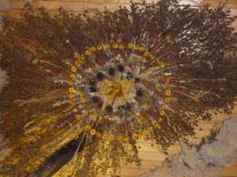 Wave Rock is amazing. It is 15 metres high and 110 metres long. For a rock that is big!! yet it surprises people by being shorter than they expect. I don’t think anyone is truly disappointed when they see it. It is ever changing colour with the sun reflections.

You can walk up and over it and the view from the top is amazing. You can see for miles or should I say Kilometers (somehow it just doesn’t sound the same to me.) 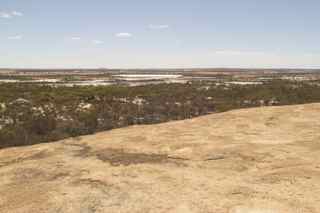 We walked over the rock and down the other side, continued on to Hippo’s Yawn. I have seen Hippos Yawn so many times before but it was the first time I saw the “Thinking Man” sitting next to the Hippo. I wondered if anybody else saw what I saw. I know my husband only saw him when I pointed him out. 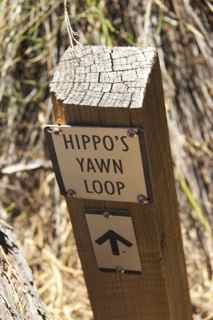 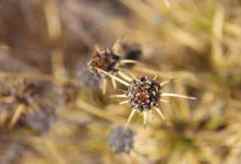 After Way Rock  we drove out to Mulkas’s Cave, it is well known for it’s rock art. It is said to have 452 paintings in 3 different chambers. Mulka has a story as well. The story goes his mother fell in love with a man who she was forbidden to marry. The tribe believed it was because of this, Mulka was born with crossed eyes. Not a good thing when you have to throw a spear to survive. Instead of hunting kangaroos he turned to catching and eating human children (pickaninnies). He lived in the cave and some of the handprints are said to be his. There is more to the story. Mulka killed his mother after she told him off for eating the children. He then fled the cave and headed south. He was tracked down near Dumbleyung and killed. His body was left for the ants as a warning to all those that break the law. 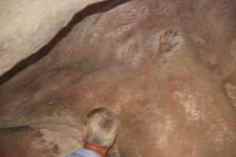 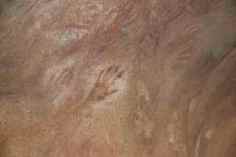 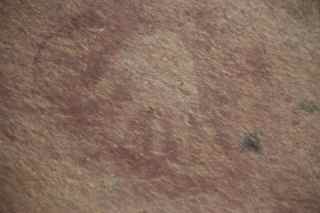