We took a rest stop at Aileron. There is a large statue on the hill behind the town. Very impressive. The “Anmatjere Man” was erected in December 2005. He stands 17 m to the tip of his spear and weights 8 tonnes. There is an art studio, which has photos of the build. There is a woman and child with a lizard Statue next to the art studio. I am sure there is a story to the two statues but I didn’t see an information board. Aileron was different. Apart form the statues there wasn’t anything about the town to write home about. A service station and a few houses that was it, oh and the statues. 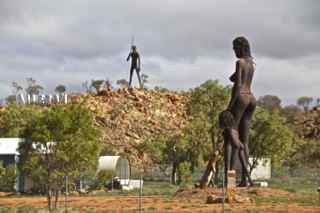 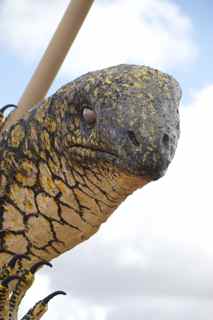 What was interesting about the stop was we saw our first Telstra hotspot. I had never seen one of them before. There is no signal except in that one little spot. There is a little platform for your phone so you could make your call. Telstra tell everyone they cover Australia but they don’t. I was impressed with the concept of the hotspot. I tried to make a call but it didn’t work for me. So I didn’t get to “phone home”