We didn’t know how long we would stay back in Alice Spring as we had the banging noise at the back of the car to look at. We chose the same van park. The first thing Adrian did when we arrived back into phone service was to start to make calls. It seemed one of the suspension air bags we had put in at Port Augusta had ruptured. As we had purchased the bags in Port Augusta the people in Alice Springs wouldn’t replace it for free. It was suggested that we drive back to Port Augusta to have it fixed there. You are joking aren’t you? Port Augusta was over 1,000 km away. If we had jumped in the car and drove non stop it would take us over 13 hours to get there. Then there would have been the cost of fuel or if they set it to us we would have had to pay for accommodation while we waited. We didn’t wont to but we decided we would have to buy a new set (they don’t come individually.) Arh. Another $1000. The people at TMD took pity on us and started to ring around to some wreckers. They found a new single one for $325. If we pick it up they would fit it for us. It took all day but finally the job was done. We were only $450 out of pocket. Only.

We had heard a lot about the Desert Park. It offers over 200 different animals and over 400 different plants along with nature theatre and nocturnal tour. I got to see my first dingo. (I had thought I would see a lot at Ayes Rock but I was out of luck.) What is the different between a dingo and a dog? The dingo is said to have orientated from Eastern China and the domestic dogs from grey wolfs. Dingoes tend to howl and dogs will bark. Not many of the dingoes in the wild are true dingo now as they have been mixed with the domestic dogs. The dingo is still hunted as a pest hence the dingo proof fence.

We were very impressed with the park. There were a number of huts with information activities boards for children. Yes we played with them as well. 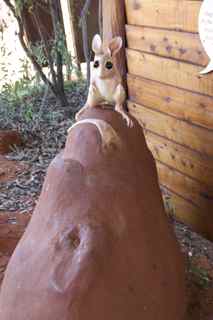 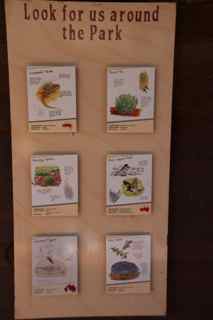 The park was full with bird life but they were real hard to capture a photo of. I will correct myself. I took a lot of photos of birds and not all of them were of blue sky. Some of the photos had a tail or a wing in them some even had a blurred mass. I did enjoy the aviaries; at less some of the time they sat still longer enough for me to take a shot. I never thought much about birds until I started to travel. Most of them are very different from what I am used to. 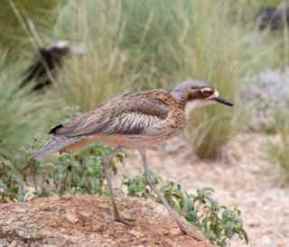 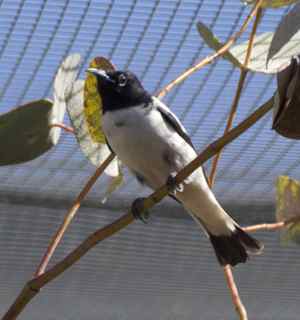 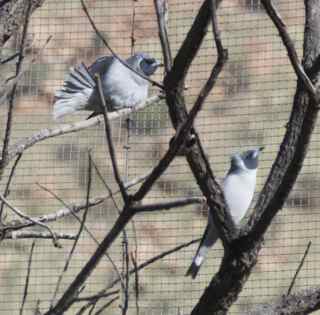 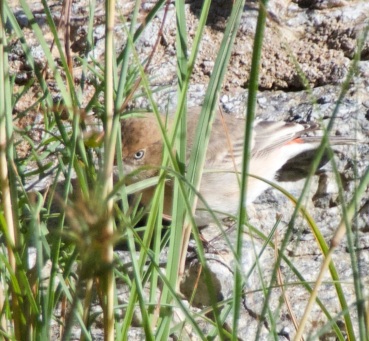 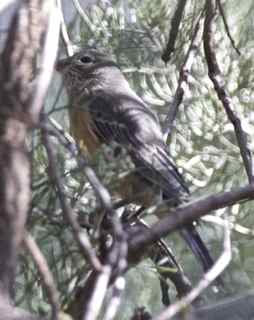 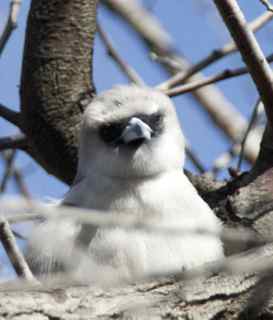 It wasn’t just the birds that were fascinating. Most of the plants had plaques with different names and what they were used for. The nuts of the Red Mallee did look like spinning tops and the bark of the Red Mulga looks like my hair on a bad day (if it was red). 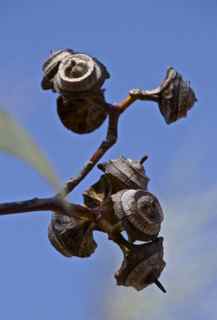 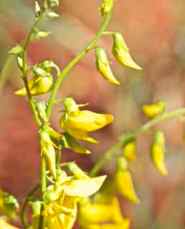 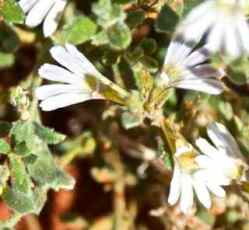 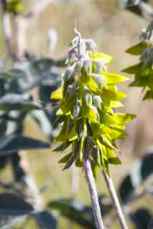 The nocturnal houses are always fun. We started with the Thorny Devil, which I found out from the information board, has fine grooves in the skin, which draws water from all over its body to the devil’s mouth so it can drink. Basically he can have a drink while standing in the rain. We moved onto to the snakes, spiders and lizards. There were some furry animals as well but they like to hide. 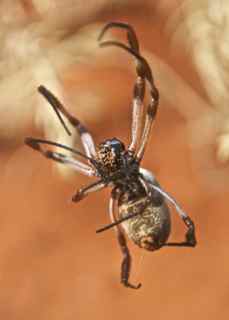 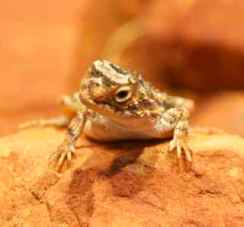 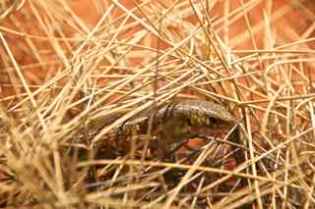 What really surprised me was the park had a Numbat. The Numbat are a rare marsupials termite eater and they are the only strictly diurnal (daytime actives) marsupials in Australia. They can eat up to 15,000 to 25,000 termites per day and can only be found in the wild in a small area in south west of Australia where I grew up. (We call a silly person a numbat.) This one was a long way from home. 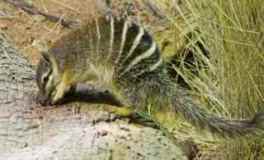 The Desert Park has a Nature Theatre. This is where you can “feel the adrenalin rush as raptors of the desert sky fly over your heads”, who could pass up that chance?   There were about 50 of us waiting for start of the show but it wasn’t long after we sat down that the weather stated to roll in with a purpose. The show started with 2 kites flying in and the ranger saying she hoped the she would be able to finish the show before the rain came. The Kites flew around and over the stadium before coming to sit in front of us. 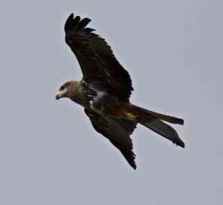 The ranger fed them treats and told us a little more about the birds. Then came a magpie, which sang for her, an owl and a long legged bird, which I can’t remember the name off. (Yes I know I would have paid more attention but I was so mesmerized with the birds I didn’t.)  The bird walked around the audience. We were told the long legged bird is on the endangered species list because of the domestic cats. The bird’s defense mechanism is to stand still so any birds of prey that flies over it won’t be able to see them as they blend into the ground. This works great for any attack from the skies but when the attack comes from the ground the results are gravely different. The ranger asked the bird what he would do if he saw an eagle and the bird stood still. Then she asked him what he would do if he saw a cat and the bird ran away. We were joined by another ranger with what I think was a hawk. He did the training thing where he through a piece of meat, which was attached to a piece of sting high into the sky. The hawk flew to it and caught it in the air. Everyone clapped. The hawk didn’t seem very happy went the ranger took the piece of meat from him and gave him only a tit bit in return. The ranger threw it again and the hawk caught it again. Then for the last act of the day, with the clouds turning really grey, was an eagle. It came circling around before landing. The eagle seem disinterested in the crowed and kept his back to us most of the time while the ranger feed him teats and tried to get him to turn around. I was flabbergasted with how the bird interacted with the rangers. Truly amazing show. 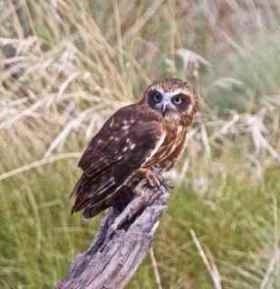 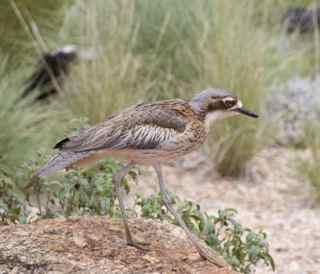 Just as the eagle flew off the rains arrived and with it hail and wind. We huddled together trying to stay dry in the stadium. The storm lasted about half an hour. Finally it was only a drizzle and to prove it was all over a rainbow filled the sky. The ranger said she would try to get a buggy to drive us all back to the main gate but most of the people didn’t wait around. 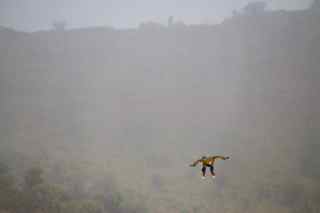 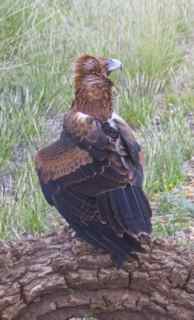 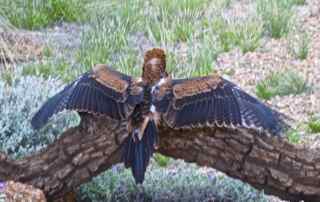 Hail was everywhere. The dry creeks we had seen as we arrived were now flowing torrents. We were concerned about the car but apart from it being covered in leaves it was ok. The road back to the van park was a bit hairy as the roads were now rivers. There were tree branches everywhere and hail. The children ran and played in the water and the hail. I imagine for most it may have been like snow. We did see a small hail man. 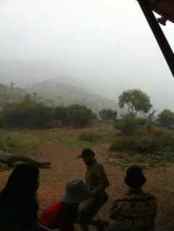 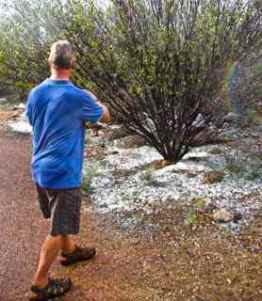 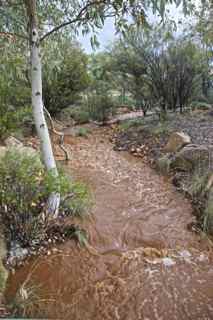 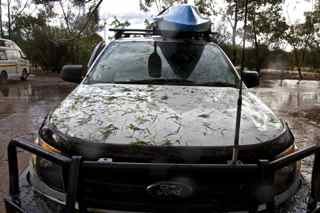 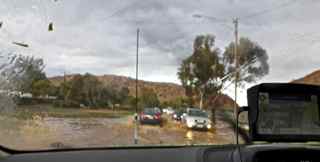 We left the next day. I wanted to take a photo of the Todd River flowing but there was so many people doing the same it was hard to get a parking space.