Our next stop was at Barrow Creek World War 2 bush camp. It is off the road by about a klm. There is only one small sign and if you weren’t looking for it you would miss it. The road leads you into a massive cleared area.  It was once a small military community with accommodation, a power plant and even a small hospital. All the buildings are gone now.

Only the empty space and some of the concrete pads are left. We found a pad and parked up. There were other vans but because the space was so large and the vans were scatted it almost felt like we were on our own. 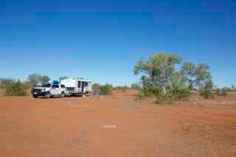 The bush camp was an overnight stop for troops moving north from Alice Springs. It operated for about 3 years. There were 4 overnight stops along the way. Barrow, Banka Banks, Elliott and Larrimah. As there were no bitumen roads back then the going was slow. We had seen the military moving equipment as we traveled but didn’t think much of it. I don’t know where they stop now. 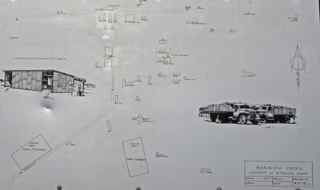 We spoke to an elderly couple; they said they had been coming to the site for years and staying for about a week each time. This year is the first time they had seen anyone using the site. They didn’t know what had changed. (They hadn’t heard of Wicki camps.) They were a little disappointed that the secret was now out.

We walked around the site and found some odd 44 gallon drums brown with rust. There was also what looked like an old wrecked caravan and some round seed I had never seen before. We had drinks with other caravaners and enjoyed their fire. There was plenty of wood around and they had a fire pit where they had parked we didn’t (well that was our excuse.) We spent two nights before hitting the road again. Not a lot to keep a person entertained but a great spot for a night or two.