It was decided as a group to go to the Tully Sugar Mill. If it was just going to be me, going to a sugar factory wouldn’t have been on my list of thing to go see. The Tully Sugar Mill is the only sugar mill in Queensland maybe in Australia, which runs tours. The sugar industry in the area dates back to the 1860’s. Way back then the farmers would crush their own cane. It wasn’t until after the First World War that things change with returned soldiers taking up farming in the area. Construction of the (Government own at the time) Tully Mill was started in 1923 and it started to crush its first cane on 5 November 1925, it was 32,075 tonnes of cane which giving 3,946 tonnes of raw sugar.It was like being back at work. Each person in the tour was issued a hardhat and safety vest. We were given a safety talk and a small bag of Tully sugar each. Then we were off for the walk around the factory.

There is some 280 km of train tracks, which bring the cane to the bin tipper. (Each bin weighs between 8 or 10 tonnes.) From there the cane is shredded and crushed. The juice is turned into the sugar and the remaining fibre is used to fuel the plant. Any extra power is feed back into the grid. 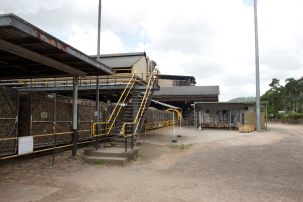 The factory holds the passing of time in every nook and cranny, every pipe or step. The old supports the new. 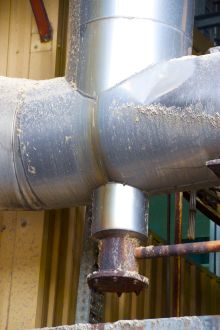 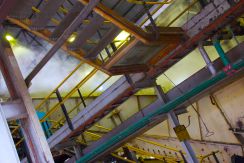 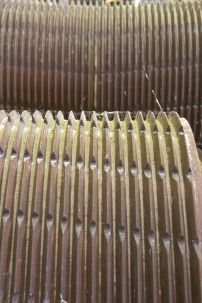 The sugar is heated and lime is added to settle the unwanted material out of the juice. The impurities are rich in nutrients and are recycled back to the cane fields. The clear amber colour juice has only about 15% of sugar, so there is still work to do. The juice is boiled and passed from vessel to vessel until it is a syrup containing about 70% sugar. Then interesting they seed the syrup. The seeds are a very fine sugar crystal. The sugar will deposit itself on the seed crystal. When the seeded crystals reach about 1 mm square it is separated. It is then spun at high speed to take the last of the molasses from the sugar. 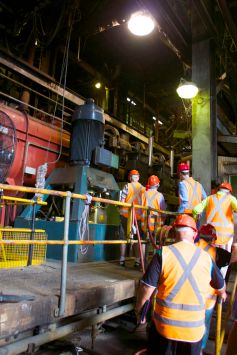 The pure sugar is then dried and cooled. With this all done the sugar is ready for shipment. Each truck carries about 45 tonnes of sugar and all of Tully sugar is exported and we were told it is widely recognized for it high and consistent quality.  The molasses is sold as well. (I can’t remember if that all goes oversees or not.)

I was surprised with how interesting I found the tour.

After the tour we had a picnic lunch in the local park right next to the Big Gumboot. Tully is known as one of the wettest places in Australia with an average annual rainfall of over 4 meters and with a average of 150 rainy days a year. The Golden Gumboot stands 7.9 m (311 inches in the old scale) reflection on the 7.9 m of rain the town received in 1950.

Around the spiral staircase inside the golden gumboot are old photos of the different flooding of the town. 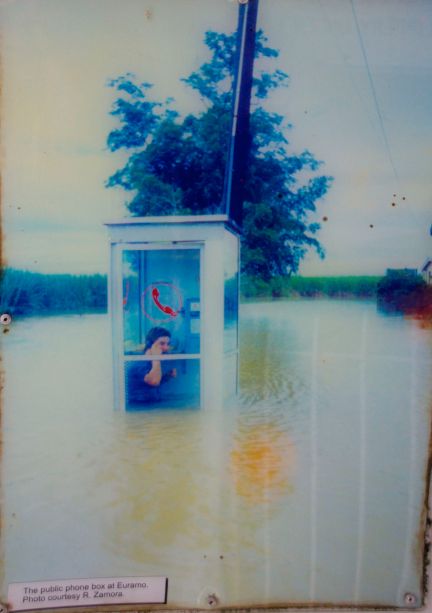 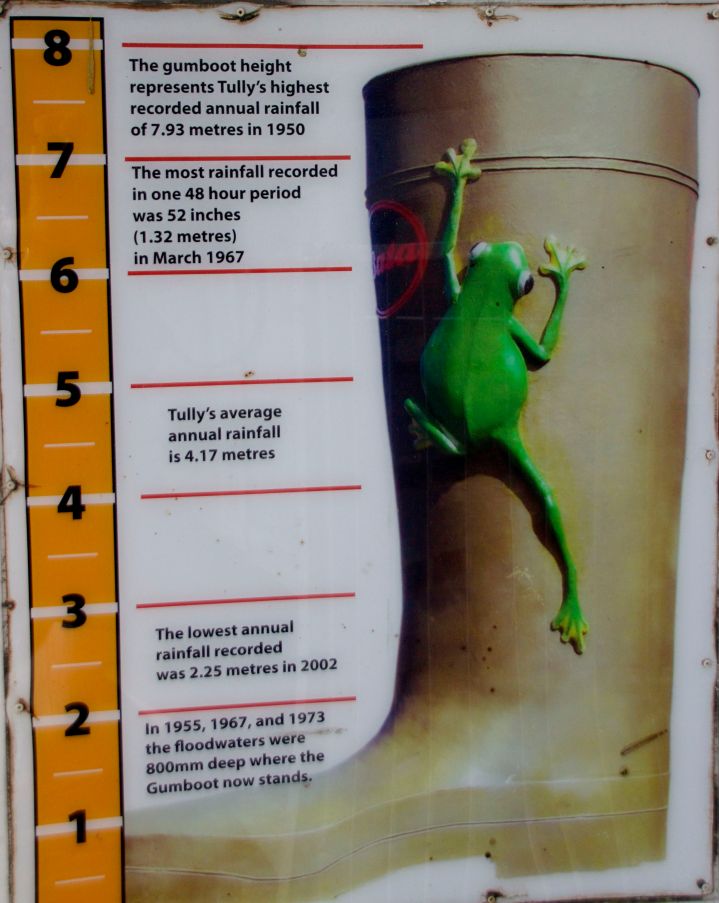 The staircase leads to a viewing platform where we could look over the sugar mill. The boot doesn’t look that tall when you are looking up at it but when you get to the top and survey the surrounds, 7.9 m is a lot of water. 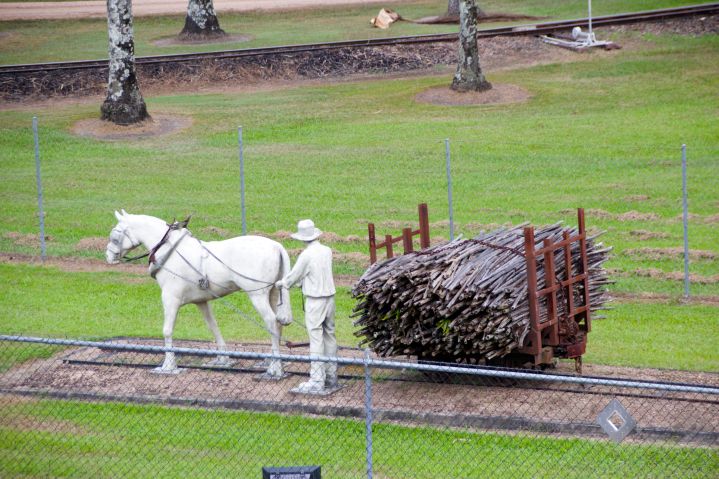 For our lunch we sat under some trees filled with bird nests. Not the one I am used to that sits between the branches, these nests hung from the branches. The owners were everywhere. They didn’t seem impressed with out lunch as they seemed to be keeping an eye on us at all times.

The birds (Shining Starling or Metallic Starling) migrate from New Guinea coming back to the place of their birth. They will refurbished the old nest or build a new one. They are well know for their shimmering iridescent blues, green and purple feathers. Well blow me away, was their striking bright red eyes. Spooky when they watch you.