Adrian’s back hadn’t really improved so we had to make the decision, do we stay or go. My brother lives in Maitland and I knew we could stay with him giving Adrian time to get further treatment. With Maitland being bigger than Mission Beach we did think there might be something more suited medically for back problems in the town.

The decision was made to move on. I had one more day to do anything I hadn’t already done. I had though I didn’t have any photos of the Mission Beach town so grabbed my camera and started to walk into the town. I had only just walked out of the van park into the park area next to it when I spotted a group of people playing Petanque. I had seen the game before and had played once without too much success. I asked if I could take some photos of the group playing. One of the men said yes of course if I join the game. They were playing with one person down. I started to protest. No I have never played before. Ok I lied but I did tell you I didn’t have much success on that one single game, I figured I didn’t play only practice so I didn’t really lie. Petanque (boules) is a little like bowls (it is where we get bowls and curling from.) The aim of the game is to get you ball as close to a smaller ball as possible. With Petanque you get to toss or roll the hollow steel ball and you can play the game almost anywhere.

The history of the game has its start around the 6th century with the Greeks tossing coins. The game then moved on to flat stones then latter into balls. The balls went from steel to wood back to steel again. It is said Charles IV and Charles V of France forbade the common people to play the game. The ruling was later lifted in the 17th century. (What a strange thing to forbid.)

The game is fun to play. I made sure people were standing anywhere but in front of me, just incase. Good thing too as some of my throws seemed to have a mind of their own. I didn’t get many photos. I did make a point of taking a shot of the winning ball though; after all it happened to be mine. Yes that is right. I saved the day with the winning shot. Good stuff. 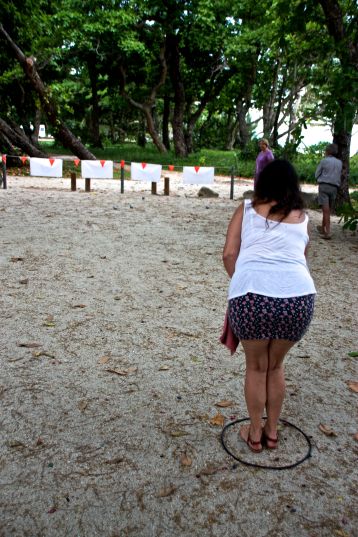 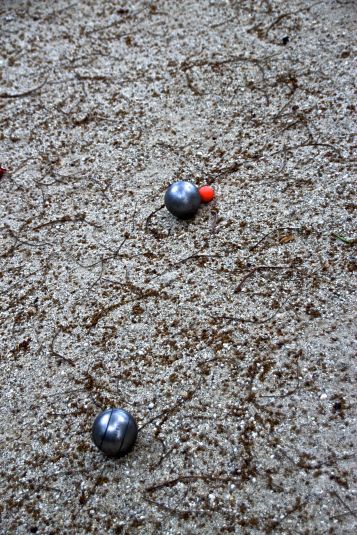 After the game I traveled on to the main town square for some photos. Nothing spectacular, just reminders for me of our time in the little seaside town. 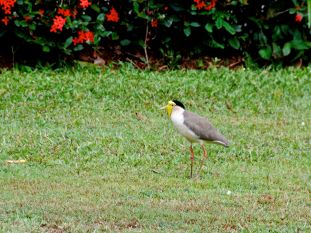 I then spent the rest of the day getting the van ready to head back onto the road. We had been in Mission Beach for 5 weeks. The time had blown past so quickly.   There were only 2 disappointments: the first being Adrian hurting his back. The second being I only saw one Cassowary. They are supposed to be all over Mission Beach. There are signs up everywhere warning people to be careful when driving incase you hit one. The Cassowary is on the endangered list with number perhaps as few as 2000. They live in the tropical forest of New Guinea and Northeastern part of Australia. The bird is the third tallest and the second heaviest bird in the world. (The ostrich and emu tops the list before the Cassowary.) The one I did see was casually walking across the road. I was so surprised I didn’t reach for my camera. I had to settle for a photo of the TV when a news article told the story of a cassowary walking down to the beach and sitting under someone’s umbrella for the shade. It would have been a shock to the owners. The second photo is of a Cassowary statue in the tourist information centre at Kuranda.