We made it to my brother’s place in good time. Both my brother and my sister- in-law were at work so we parked up and waited. It was about nine o’clock in the evening before my sister-in-law arrived home, while my brother stayed at work. We were excited to catch up with each other. She made us come inside for a drink and a quick natter. As we walked into the kitchen there on the table were two towels with our names embroidered on them. Shazza was so thrilled to have all the family coming for Michael’s birthday she had embroidered each person’s name onto a towel and placed them on the beds they would be using. As we were staying in our van she had laid ours out on the table for us. There were also chocolates to add to the sweetness of the gift. Then we were introduced to the snack bar she had set up for everyone. Knowing if you are in someone else’s house and you get hungry you don’t feel like you can go through their cupboards to help yourself, hence she had made it easy for everyone by making up the snack bar so everything we could wish for was at out fingertips. Shazza is really the hostess with the mostess.

We couldn’t stay up too late as we were heading off to Sydney the next morning to pick up my younger brother who had flown in from America and my younger sister who had come from Perth.

My family would be gathering together to surprise my brother for his birthday. I am one of five and as a family we are spread out. My younger brother in America and my mother along with my two sisters live in Perth with the birthday boy, Michael living in Maitland. (He was the one we stayed with when Adrian had his back operation.)

My older brother was expecting Adrian and I but no one else. Next morning we drove down to Sydney to pick up my two younger siblings. My brother Peter booked first then my younger sister Vicki booked so she would arrive as close as possible to his time. We had to be at the airport for 7:30 am (who’s idea was that) it meant leaving at 4:30 am. Not knowing where we were going we gave ourselves plenty of time. Vicki had arrived first and had joined my brother then walked out to the pick up area just as we arrived.

Michael arrived back at about 5 in the evening. He greeted me with a smile then my younger sister, who had been hiding behind the kitchen counter jumped up. Michael’s smile grows wider with the surprise. He had thought she was still in Europe (She had arrived back to Perth just 2 week before from a 6 week holiday.) After about a minute it was my younger brother’s turn to jump up from behind the kitchen counter. This time the smile was wiped from my brother’s face with total shock. He kept on muttering, “I can’t believe it, I just can’t believe it. Your both here”

It was Tuesday and my mother and my older sister Lynda with her husband Dallas would arrive on Friday. We had thought it was going to be Friday so it was a surprise for me too when they arrived on Thursday and I helped arrange for the family arrivals. My younger brother and sister would be staying for about two weeks along with us. My older sister and her husband for about 4 days. My mother was going to stay for a week, leaving when the rest of us left. It was the first time in 6 years we had all been together so you can imagine the conversations that went on.

I ran around taking family photos of everyone. Peter asked if his photo would appear in one of my blogs. I told him only with his permission. He gave it, saying it would make him feel famous to appear in a blog read by thousands. (I don’t have the heart to tell him not that many people read it.)

So here is my baby brother all the way from America. It is not the only photo I have of him but it was the one I was taking when we had the conversation.

I have several of him mowing the lawn. My older brother has a big back yard. For Peter it was fun to jump on the ride on mower as he has only a postage stamp size lawn back in the US. Then there is the great photo with Adrian one taken at the party. 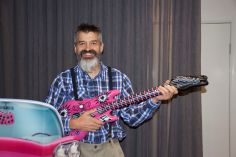 The one Peter likes the best is the one take of Kevin and him. Kevin belongs to my nephew and Luke had trained Kevin to sit, anywhere and anytime. It is Kevin’s party trick, which he does very well.

The morning of Michael’s birthday we did the presents first. Michael has a thing for timepieces. Shazza gave Michael a handmade watch to add to his collection. He has about 60 watches already with each one holding a special memory. I gave him a clock made out of an old record with the numbers cut into the vinyl. Personally I think he liked my gift best of all his siblings. It was that good.

The party was held at the local function centre so on the day it was all hands on deck to pimp out the room. What is it about working together as a family for a birthday that turns everything into fun? Well for us it was fun, poor Shazza was a little stressed out trying to get everything just right and I don’t think we were taking it as seriously as she was, although at the end she did have a big smile on her face. The room looked amazing with the birthday cake and the photo station along with the candy table all set up. Did I tell you, Shazza is the hostess with the mostess? 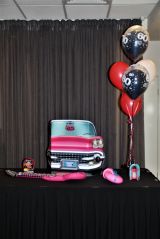 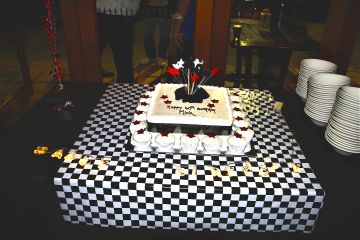 While all this was going on Adrian was busy taking everything out of the back of our car. Going back 6 months ago we had an accident resulting in damage to the back end of the car. Knowing we would be staying in Maitland for two weeks we took the opportunity to have the damage repaired. We had to empty the back of everything first.

Shazza had decided on a 50’s theme night. I was in trouble for that as I had forgotten to tell Peter and Vicki. That was ok I didn’t have anything myself, so it was a quick trip to the local second hand shop for my sister and myself. I picked up a pair of braces for Adrian to wear, after all men’s clothes haven’t really changed that much over time. Peter ended up wearing them and told everyone he was an American hillbilly of the 50’s with his beard it was very believable.

Shazza had arranged for an entertainer. He started as a singer then changed halfway though to be a comedian. I don’t really like comedians as they generally fill their act with swearing but this man was not only funny but not one swear word. I was very impressed.

In his alto ego form he told everyone about how women often threw their bras at him because he is just so sexy. Everyone laughed and my younger sister said, “I could do that”, me “Go for it.” Within seconds Vicki had her bra off and was throwing it at him. I am not sure who was more shocked him or me. My older sister thought it has all been arranged before hand. Nope, spur of the moment thing and something I can tease Vicki about for years to come. A pure golden moment.

To add to the theme of the night Michael took his sidecar to be displayed outside of the centre. Michael was the Australian Speedway Champion in 1987/88 in Right–hand Sidecar (Passenger). Michael is still in contact with his driver, and he came to the party.

The sidecar had been sold off when Michael quit the sport but he had found it again and restored it. The bike had only arrived back from being repainted the day before. It looked amazing. On the night it was a great talking piece and everyone was using it as a photo prop. I came away with some lovely family photos. My younger sister ran around gathering our family together to make sure we had a last photo with our mother. For two reasons first being we don’t know when we will all be together again and secondly because my Grandmother started saying we had to have one last photo with her at every family gathering when she was in her 70’s. She lived to be 98 so we ended up having lots of “the last family photos with Grandmother.”   It became a family joke but a nice joke, as they are the photos we look back on now and we have so many to look back on. Now we have started the tradition with our mother. 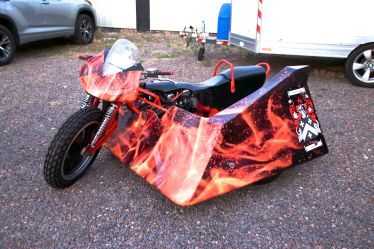 It was a great night. Shazza put in so much work to make it so. It was a buffet meal and about 70 people were invited. Sadly about 20 of those who said they would come didn’t turn up. This left Shazza paying just over $1,000 for food she didn’t need. Such a waste, mind you we didn’t have to cook for the next week so it wasn’t all bad from that point. Just sad the people didn’t have the good manners to let Shazza know.

The two weeks flew past so quickly. As our car was in the shop we hired another car and made a trip with family out to Morphet and to the Hunter valley wine area. 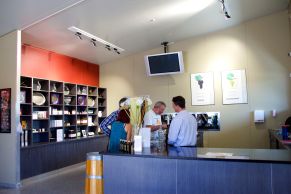 When we weren’t out and about with the family Shazza had us making candles which is her favoured thing to do. We had so much fun I can understand why she like it so much. We each made two candles and we got to pick which fragrance we would like out of the 50 or so my sister-in-law has. I chose Champagne for one and violet passion for the second. My sister chose Monkey fart for one of hers as she was giving it to her young son. Thankfully it only smelt of bananas.

We picked up our car on the last day and there were lots of sad goodbyes from everyone. I will be having the next big birthday so it was suggested the next family reunion would be for my birthday. Great idea if only I knew where I will be when the time comes but I do have time to find out.