Beechworth and the Old Lunatic Asylum

We crossed over the border on our way to Beechworth. Although we wanted to see Beechworth we continued on to Stanley. It is only about 10k from Beechworth. Why? They offered a bush camp at the local sports grounds and we love our bush camps.

We had picked up some information of Beechworth from an information centre before reaching the town. Among other thing there was a ghost tour at the old Lunatic Asylum. The tour seemed interesting and after we had set up camp we booked our tickets. 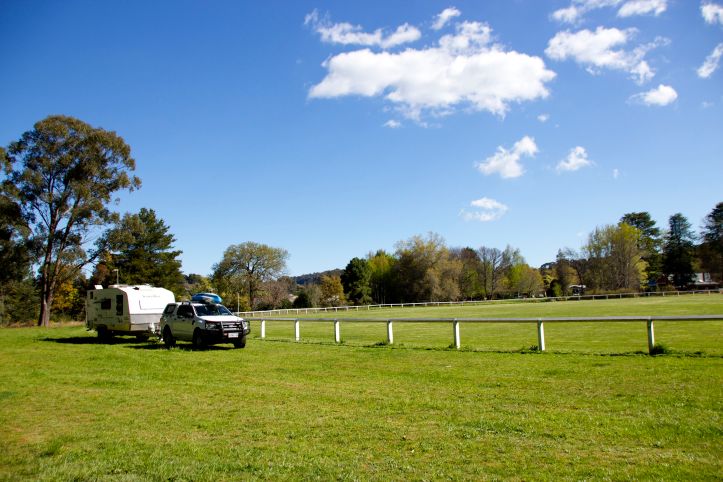 To add to the night we decided to have dinner in the town. It was Monday and we didn’t think about being in the country. We had arrived at about 4pm to have a quick look around the town and we were surprised to see some of the shops were closed. Then we went looking for somewhere to eat. One after another of the places we looked at were closed as well. It seems nothing happing on a Monday night in Beechworth. Country Life.

We eventually found a pub for dinner. Adrian had a schnitzel and I had steak. Adrian had a glass of wine and I stuck to water. Adrian had coffee and I had a tea to finished up the meal. We walked away being $77.90 out of pocket for the meal, with the tickets for the tour it was going to be an expense night for us. Good thing we were staying at a bush camp.

We drove up a long driveway to a collection of large buildings. I had expected a smallish building with several smaller one clustered around it.   The main building was massive. 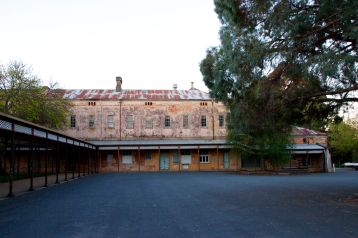 We had time so decided to walk around the outside of the building. Information boards were scatted around the buildings. On one they proudly announced that “each room is fitted with every improvement for ventilation purposes, and is provided with one window containing the usual number of panes of glass, but they are somewhat small, and as they are of thick plate glass it will be impossible to break them, unless with a weapon of some description.” I bet that made the local rest easy in their beds at night.

Before the Asylum was built people were kept at the local jail. With numbers starting to grow, it was decided a more permanent solution was needed. Most of the materials for the building were sourced nearby, although the Oregon timber beams used for the main building were imported from America. The timber was shipped up the Murray River by steamer to Wahgunyah then hauled by horse drawn wagons the last 52ks, taking up to 3 days for some of the loads. The building had been constructed on 150 acres to be self supporting as much as possible with orchards and vegetable gardens along with farm animals for meat. In 1867 the Asylum was opened. By 1880 it was overcrowded. Instead of building another barrack style building the authorities chose to be innovative and build cottage buildings. The patients were encouraged to care for themselves in their cottage.

As we walked around the buildings I stopped to read about the “Ha Ha” wall. The name comes from the French language meaning “surprise”. The surprise being that although there was a wall it was designed so it didn’t look like a wall was there. This was achieved by having one side of the wall dropping down into a large ditch. . The wall was thirteen feet high but looked like it was only half that size and although appearing low the effect was enough of a deterrent to anyone wishing to scale it.

We met our tour guide in what looked like the admission area. It was set up with items reflection on the asylum.

There was even a list of the reasons someone could be admitted to the asylum. Women didn’t fair too well. If you had an argument with your husband, or if you were deemed to be a bad mother, even if you were a woman in a hotel. Off to the asylum you could go. Not wonder they built it so large. 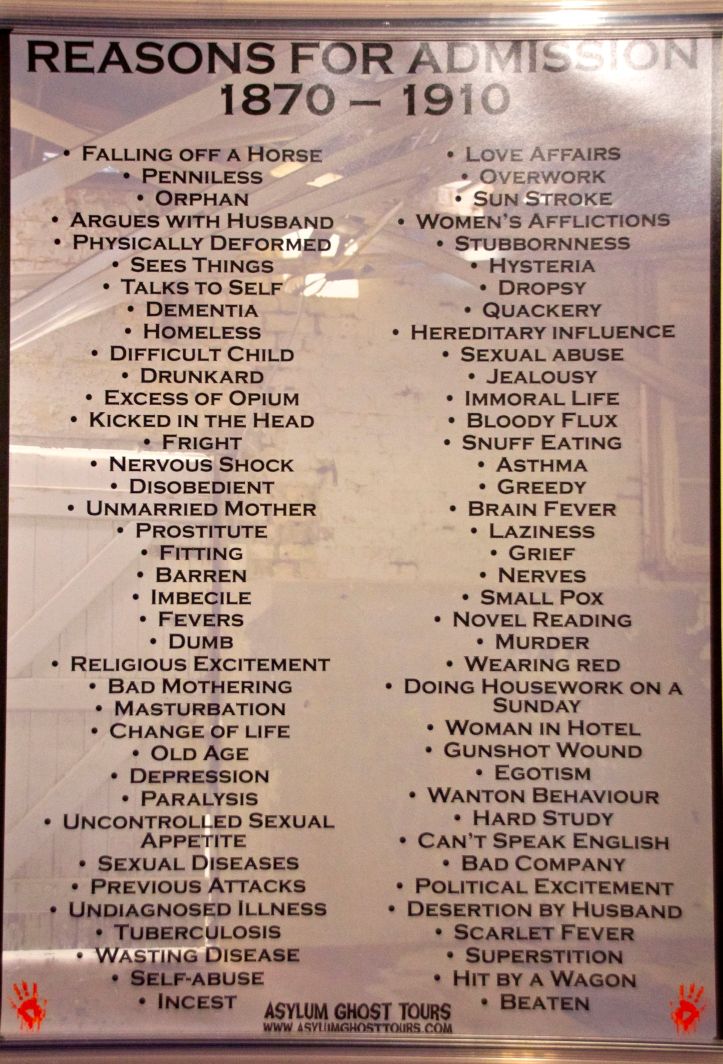 We had thought we would be the only ones for the tour but another couple turned up at the last minute. The four of us started off receiving a lecture on how to behave. We needed to be respectful of the dead and not to anger them. Who knows what would happen if we didn’t. We were asked if we saw anything to let the tour guide know. We were also told we needed to be aware that sometimes a ghost will take a liking to someone on the tour and go home with them. If this happen we needed to let the tour company know and they would send someone out to deal with the ghost. Good to know.

With that all done we then walked through a door and into the asylum itself. I immediately started to have a prickly feeling. You know that feeling when your hair begins to tingle and you get a little shiver over your body. I felt a quiver of excitement. I had the thought something spooky would happen, but the prickly feeling disappeared after several seconds and that was the end of the spooky feelings for the night. Sorry to disappoint you. I know I was. We heard tales of the different groups that had spooky experience. They all seemed to have much more fun than us.

The main building being the largest was divided into 6 dormitories with day rooms. The long corridors in each dormitory were used as dining room. There were between 16 and 20 cells per corridor. Each cell was 7ft by 11ft and 12ft high. There were also padded cells in each division. We were told about a matron who still walked the halls at night and she was the most common ghost people saw. Did we see her? Me, not a thing. Adrian, not a thing. The other couple nothing either.

We did learn about the lives of some of the inmates as we walked the long corridors in the dark. We were shown into a padded cell and shown teeth marks on the door where one individual inmate had bitten it in frustration.

I took my camera and was told about all the other tours groups having ghosts appear on their photos. I did get excited but as I didn’t think to take a tripod along, silly me, I ended up with some really bleary photos. Maybe there is a ghost there I just can’t see it.

While the tour was fun it wasn’t frightening at all. Did I see a ghost? I didn’t think I did but talking to Adrian latter I told him about how in one area I had a feeling that there was a military man who look like he was from the first world war standing off to one side with a rolled cigarette in his hand. I told him how the man threw away the butt, and tipped his hat to me before walking away. I though it was interesting that I thought I saw a military man instead of an inmate. Adrian told me how at one point the military was housed at the asylum during the war. He told me it was on one of the information board. I missed that one. I did think it was interesting. Now did I see a ghost or was it my imagination. Mmmm spooky.