A Brief History of Ned Kelly.

We moved on to the Ned Kelly vault, but first a brief history of Ned.

Ned was born Edward Kelly at Beveridge in December 1854 or it could have been in June of 1855. (I have read both birth dates. Most common is 1855.) Ned was the third child and the first son born to John (Red) Kelly and Ellen Quinn. Together they had five daughters and three sons.

John was from Tipperary in Ireland and in 1841 was transported to Van Diemen’s Land for seven years after being caught for steeling two pigs. After his release he met Ellen Quinn who had migrated to Australia as a child. He was 40 and she was just 18.   John died from Dropsy at the end of 1866. (Dropsy is a condition characterized by swelling and can lead to heart and kidney problems.) Soon after the death of John, the Kelly family moved to Greta then onto Eleven Mile Creek.

In 1869 when Ned was just 14 he was arrested for alleged assault on a Chinaman and held for ten days on remand. The charges were dismissed. The following year he was again arrested and this time held for seven weeks as a suspected accomplice of the bushranger, Harry Power. (Harry was from Ireland and had been transported out to Van Diemen’s Land for seven years as well and it was though he had taken young Ned under his wing as an apprentice.) Again the charges were dismissed.

In 1870 Ned was acquitted of ‘robbery under arms’ then later sentenced to three months for violent assault and a further three months for sending indecent letters to a female. Ned was sent to Beechworth to serve the sentence. Soon after he was released he was sentenced to three years imprisonment for receiving a mare knowing it to have been stolen. Some time after Ned served his time his mother married George King. Ned was there to sign the marriage register as a witness. (Although Ellen had remarried she was always know as Mrs Kelly.) To start with Ned worked as a foreman at a sawmill, which provided timber sleepers for the Beechworth railway. Things didn’t go well and after two years he joined his stepfather in stealing horses. Ned’s brothers were also in and out of prison, mostly for horse stealing.

The Kelly family saw themselves as victims of the police. The story goes Ned was fined for being drunk and disorderly. A fight broke out between Ned and Constable Fitzpatrick and Constable Lonigan when Ned resisted arrest and in doing so damaged one of the trooper’s uniforms.

The police troopers went to Mrs Kelly’s home with the intent to arrest Dan.   Why Dan? It is thought because Ned kept evading them. Dan was just 16 at the time and a lot easier target. While the constables were at the Kelly homestead, Fitzpatrick made a clumsy advance to 14-year-old Kate Kelly and a brawl broke out. The trooper claimed Ned shot him: although Ned denied he was at the homestead. Dan escaped and went into hiding. Mrs Kelly, her son in law and a neighbour were arrested and charged with aiding and abetting with the “attempted murder of Fitzpatrick.”   Ned and Dan offered to surrender if their mother was released but their offer was ignored. The three were tried at Beechworth and convicted. Mrs Kelly was imprisoned for three years and the two men for six years each. Ned joined his brother on the run and a reward of £100 was offered for them both.

Soon afterward Sergeant Kennedy and Constables Lonigan, Scanlon and McIntyre set out to try to capture the two brothers. The troopers set up camp at Stringybark Creek. Ned became aware of where the troopers were camped and when Kennedy and Scanlon went out on patrol Leaving Lonigan and McIntyre at the camp the Kelly brothers made a move. Lonigan drew his revolver but before he could fire Ned shot him dead. McIntyre surrendered. Kennedy and Scanlon were given the same opportunity to lay down their arms on their return but they refused. There was a gun battle leaving Scanlon dead and Kennedy with a mortal wound. Ned shot him saying it was a mercy act. McIntyre managed to escape.

Joe Byrne and Steve Hart joined the brothers at Stringybark Creek. Four days later on the 30 October 1878 a reward of £2000 was announced for the capture of the Kelly Gang. On the 15 of November, the Kelly Gang are declared outlaws by an Act of Parliament.

On the 9 December 1878 the Kelly Gang made their way to a sheep station at Faithfull’s Creek, which was 6.4km out of Euroa. The gang locked the staff of twenty-two in a store-room. Joe Byrne was left as a guard and the other three made their way to Euroa where they held up the National Bank getting away with £2000 in notes and gold. It wasn’t long after the robbery that the reward was doubled. The increase didn’t seem to sway the locals as on 3-4 of January 1879, 23 Kelly sympathisers were arrested. Some were held for months without a trial and other sent to Beechworth Jail. Most were stopped from taking up land in the northeast. This ill-advised tactics alienated many of the general public and encouraged more sympathy for the Kelly Gang.

On Saturday 8th February the Kelly Gang made their way to Jerilderie. This time they took control of the local police station and locked up two policemen. They stayed until the Bank of New South Wales opened on the Monday and wearing police uniforms they robbed the bank of £2141. The gang wasn’t finished with Jerilderie they moved next door and took the sixty people in the Royal Hotel as prisoners. Ned had given the bank teller a written statement. The statement was over 8000 words long and became know as the “Cameron Letter” or the “Jerilderie Letter.” In the statement Ned tried to defend and justify his conduct as he was hoping the letter would be published.

After this second bank robbery the reward was doubled again making it £2000 per gang member dead or alive (in today’s currency more than $2,000,000.) A tracker was brought from Queensland, Aaron Sherritt, who was a friend of Joe Byrne, Aaron became an agent for the police to help track the Kelly gang. In reality he worked as a double agent for eighteen months before the police realized what was happening. They set out to incriminate him in the eyes of the Gang hoping the Gang would come out of hiding.   It worked, Joe believed he had been betrayed by his mate and shot Aaron dead on 27 June 1880. The story goes Joe shot Aaron in the doorway where he was staying while the four constables that were assigned to Aaron for his protection hid in the bedroom. 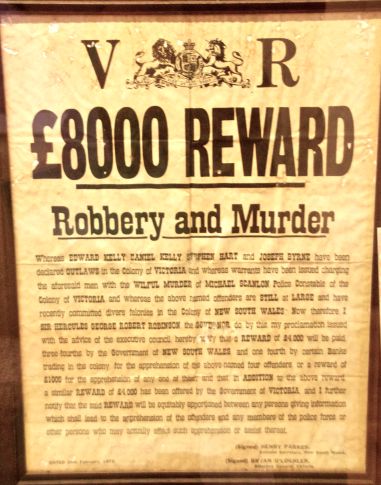 Joe along with Dan joined up with Ned and Hart at Glenrowan. This is where they took over the hotel and held about sixty people prisoner.   Fearing a train from Melbourne would be sent to arrive at Glenrowan early on the Monday the Kelly Gang decided to sabotage the line and forced two railway workers to tear up some of the rail. The scheme may have worked but for one person. Ned had allowed Tomas Curnow a schoolmaster, and his family to leave the hotel. Curnow warned the train crew and the train was stopped before it arrived at the missing track.

On foot, the police made their way to the hotel where they surrounded it and opened fire. Ned was wounded in the foot, hand and arm. Dan, Byrne and Hart took refuge in the hotel while Ned went in to the bush. Byrne had been shot in the thigh and bled to death. Ned had his armour with him. It had the added protection of a headpiece bringing the weight to about 41kg. About 5 am Ned returned wearing his armour to attack the 34 police in a brave attempt to rescue Dan and Steve. The story goes there was an early mist when Ned emerged from the bush putting fear into all who saw him. The police turned their guns on him. Ned was wounded in the legs and with the weight of his armour he was quickly brought down. He was defiant until the end.

By 10:00 am the prisoners had escaped leaving only Dan and Hart in the hotel. The police continued to fire sporadically until 3:00pm. It was then decided to set the building on fire. No one emerged from the flames. It was thought that Dan and Hart had taken poison but their bodies were burned beyond recognition so the truth may never been known. The Kelly gang was no more.

Ned Kelly was taken to Melbourne Jail where he was nursed back to health. He was taken back to Beechworth in August for a police court hearing where he was committed to stand trial for the murders of Lonigan and Scanlan.   He was taken back to Melbourne Jail where he was tried on 29 October 1880 for the murder of only Constable Thomas Lonigan. The story goes Ned was incompetently defended and virtually at the mercy of the judge, Sir Redmond Barry who tried to rush the trial so it would only take a single day. Barry even misdirected the jury on vital question, which had been asked about self-defence. It wasn’t surprising when Ned was found guilty and sentenced to death. At the end of the trial Ned told Barry “I will see you there, where I go.” Sir Redmond Barry died just 12 days after Ned was executed.

Ned was hanged at the Melbourne Jail on 11 November although there was a strong case put forward for a reprieve. A petition with 32,000 signatures was given to the government but it would not be swayed. Ned’s supporters gathered outside of the Melbourne Jail on the day of his execution. He was 25. 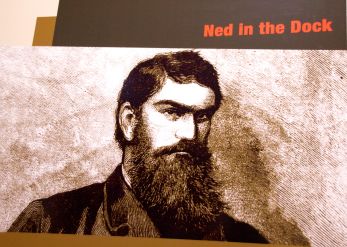 Ned’s last word, well that depends on which book you read, (the first book was published just 12 days after the Jerilderie hold-up in 1879.) Some say it was “Ah well, I suppose it has come to this” and others “Such is life”. He was buried in the grounds of the Melbourne Jail. (In 1929 the remains of the prisoners buried at Melbourne Jail Including Ned were taken to Pentridge Prison when the Melbourne Jail was closed.)

It is remarkable that Kelly has moved from being “One of the most cold blooded, egotistical and utterly self centred criminals who ever decorated the end of a rope in an Australian jail” (Malcolm Ellis Bulletin, 31 December 1966) to being one of Australians greatest legends. I have to admit I was eager to get to know more about Ned Kelly and the Gang. There has been so much written about Ned and his life and I only read a little of what is out there. What I found interesting was my view changed somewhat with the information. To start with I did see Ned as a criminal but after doing a little research I changed my mind. It seems the police from an early age had something against him and his family. Although that doesn’t take anything away from Ned’s crimes I can understand why he had a lot of supporters and I guess I have a little bit more understanding for him and his family.