Our next stop along the Murray River was a bush camp just outside of Yarrawonga. The road was a little rough to get into the bush camp but considering some we have been on it wasn’t anything to complain about. 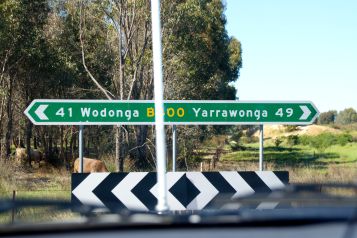 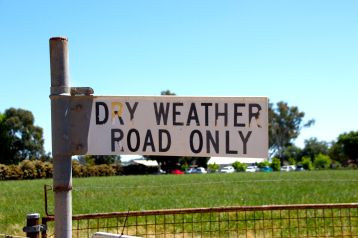 The only complaint I will make would be about the cockatoos. They can be very noisy at dawn or in the evening or in the morning and in the afternoon. Okay they can be noisy any time of the day.

On the first morning the cockatoos woke us up early. As we hadn’t heard the birds for a while it was a bit of a shock to hear their racket first thing in the morning. As we were up early, we decided to take a walk.  We ended up at the Green Bank, which is a picnic area. There was some light reading for us at the toilet block.

All was good until I started to read the big bright yellow sign.

Then saw the marking on the toilet door. Mmmm note to self. If it starts to rains, leave. 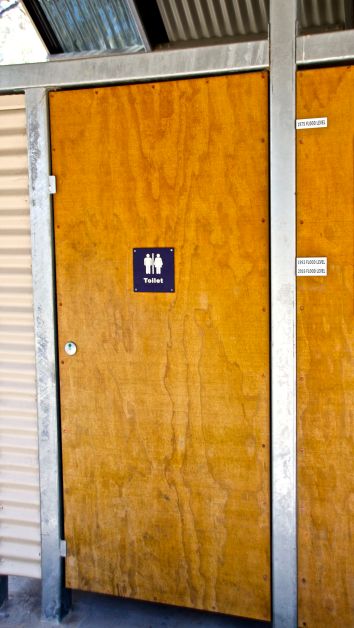 We walked away from the water and through the forest back to the van. I was really surprised with how much wildlife we saw in such a small area. Amazing.

The next day we turned right when we stepped out of the van for a walk. Again the wild life turned on a show for us, even if it hadn’t it still would have been an amazing view. 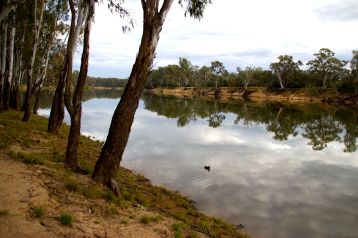 After a slow walk we found ourselves at the weir.

There was a sheltered area with lots of information of the Murray River. I won’t bore you with all the details of it but……….

The Murray River travels from the Australian Alps passing through New South Wales. It then runs along the Victorian Border before it heads into South Australia and then on into the Southern Ocean ending it’s 2530 km journey. (Barriers have been built at the Murray Mouth to stop seawater from entering the river.)

Catchments have been set up along the journey to help deal with the changing flow of the water. The Murray-Darling has 16 weirs in all and the Yarrawonga Weir is the largest. Building started in 1935 and was completed 4 years later. “The design is that of a Regulated Ogee Crest Spillway with a total of ten, 12.2 x 6.1 m steel gates, attached to concrete counter weights via a cable and pulley sheave assembly.” That sounds quite impressive especially when each pulley has to lift a gate close to 40 tonnes at a time.  They were letting water out as we arrived. It was interesting but a bit un-spectacular. There was not a great height for the water to cascade down. No rocks for the water to gush around. From Yarrawonga Weir the water flows down to the Snowy Mountains Scheme. (It is ok that is another story.) 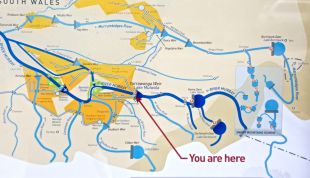 What I found interesting is that the three longest rivers in Australia run through the Basin but only 6% of the rainfall in the area makes it into the rivers. The Murray-Darling system, for it’s size has one of the world’s smallest flow volumes of water. To put it in perspective, the water that passes though the Brazil’s Amazon River in a single day is equal to the water that will flow though the Murray-Darling System in a year. The river may run slow but it packs a punch. There are about two million people that live and work in the area and it boasts of being one of Australia’s important agricultural regions, producing around one third of our food. Wow.  I did not know that.

We walked across the first section of the weir. Yes we could feel the power of the water beneath our feet. It was hypnotic watching the water rush below us.

On our walk back to the van we spotted a sign. Maybe it was a good thing we didn’t get around to putting in nets at our last stop.

We were all ready to pack up the next day and move on but for one small item that Adrian needed. We had arranged for his drivers licence to be forward on to the local post office but it hadn’t arrived yet.

Where we were we could get TV and phone reception at our bush camp but the internet wasn’t strong enough to blog. Problem solved. Yarrawonga is also big enough to have a McDonalds so off we went to use their free wifi. While we were out we decided to drive over the weir. Why? Because we could. Not for the faint hearted as there wasn’t a lot of room. It was fun though.